Designing with Ceramic Disc Capacitors for Automotive and Industrial Applications

An overview of the capacitor classification schemes and an introduction to some of the newest Vishay disc capacitors optimized for automotive applications.

Ceramic disc capacitors are a great choice for many automotive and industrial applications, but sometimes designers are bewildered by the different classes of devices that are available to them. In this article we provide an overview of this classification scheme and an introduction to some of the newest disc capacitors optimized for automotive applications.

Because of the high energy and severe environments associated with surge voltages and pulses, capacitor applications in connection with the mains must be chosen carefully. Two kinds of connections, and thus two kinds of applications, can be distinguished. In one, the capacitor is directly connected in parallel with the mains without any other impedance or circuit protection; in the other, the capacitor is connected to the mains in series with other circuitry. EN 60384-14 divides those X and Y capacitors into sub-classes according to the peak pulse voltage to which they are exposed in operation, in addition to the rated voltage.

Class I capacitors are intended for uninsulated applications in which the failure of the capacitor will not lead to a dangerous electrical shock due to a grounded housing. However, in the event of a double error, it could open safety fuses or open circuit breakers and cause a fire. 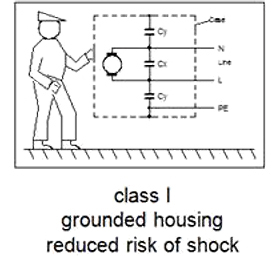 EN 60384-14 divides X capacitors into three sub-classes according to the peak pulse voltage they are exposed to in operation and their rated voltage. These peak pulses can be caused by lightning in overhead cables, switching surges in neighboring equipment, or in the device in which the capacitor is used to suppress interference (see Table 1). 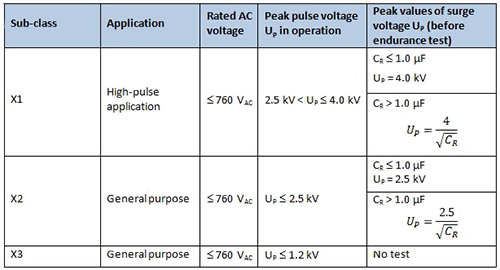 Based on many years of experience, Vishay has developed several RFI product series that fulfill the strong safety standards for across-the-line and line bypass applications. As a result, Vishay has the ability to offer a wide range of capacitors with different classifications. Amongst others, these include the most common classes X1 / Y1 and X1 / Y2. The X and Y ratings of Vishay’s most common classes can be found in Table 3 below.

It has been noted by several national authorities that safety is a top priority for these components. Therefore, international safety standards like IEC 60384-14 (world standard) and UL 60384-14 (US standard) have been developed. National authorities prescribe that EMI capacitors to be connected directly in parallel with the mains must be proven to fulfill these standards. Approved products receive safety certificates. Safety standards are listed in Table 4. 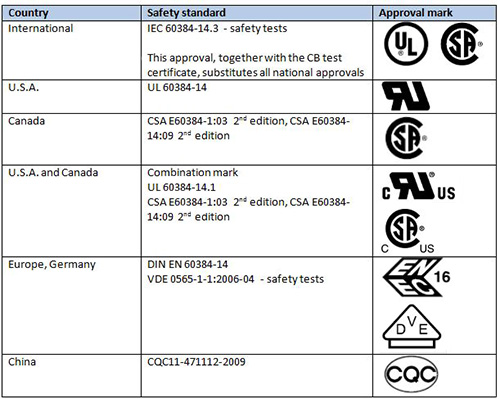 AC rated filter capacitors can be operated at continuous DC voltages without a limitation in their functionality. The maximum allowed DC voltage remains the same as specified for AC operation. In the case of applying only a DC voltage to the capacitor, the line-to-ground current (leakage current) will be near zero, and therefore will not contribute to the overall system leakage current. The choice of the appropriate filter capacitor can be made as it is for AC operation, taking into consideration a negligible leakage current as a result of the continuous DC voltage.

Although AC rated filters are labeled accordingly, DC operation will not violate their safety capacitor approval granted by UL, CSA, or VDE safety agencies, provided that the numerical values of both current and voltage are not exceeded. For example, the Vishay VY1 series and 440L series have Y1 ratings of 500 VAC in accordance with safety agency specifications IEC60384-14 and UL60384-14. Therefore, a continuous operation at 500 VDC should be acceptable to these safety agencies. There may be individual cases when system safety approval is sought that manufacturers may be required to list the DC operation mode. It is expected that only in very rare cases will safety agencies insist on additional filter testing.

In industrial electronics, where parts have to operate under extreme conditions, there is an ongoing trend towards higher quality and reliability standards. This requires the use of electronic components with long lifetimes and the utmost reliability. To meet the demands of the industrial market, Vishay Intertechnology will be releasing a completely new series of leaded Y2 rated ceramic safety capacitors — which is a further development of the company's well-established VY2 series — that offers unprecedented levels of quality and reliability.

In addition to complying with the IEC 60384-14 safety standard, the new Vishay AY2 series capacitors are also qualified according to the AEC-Q200 specification, which includes the most stringent stress tests for passive components. A good example of the difference between the two standards is temperature cycling. The IEC 60384-14 standard requires that capacitors pass five full cycles over the complete operating temperature range. In contrast, the AEC standard requires a minimum number of 1,000 temperature cycles.

The new Vishay AY2 capacitors achieve an unmatched level of performance, withstanding up to 3,000 temperature cycles without a single failure — much more than the AEC-Q200 standard. With their superior robustness, the capacitors provide the highest levels of quality and reliability. They incorporate the very latest in ceramic material, capacitor design, and production technologies.