DALI (Digital Addressable Lighting Interface) simplifies the design of lighting systems. This article will review the origins of DALI as a wired lighting interface to understand how it works, where it applies and the benefits it offers.


Wired control of lighting systems in commercial buildings is the dominant technology today and is expected to remain so for a number of years yet, despite the increasing use of wireless communications. This is one of the conclusions of a recent report from IMS Research that also forecasts that DALI, the Digital Addressable Lighting Interface, will be the most utilized control protocol in lighting systems, with over 90 million devices forecast to ship during the report period from 2010 to 2017.

DALI networks comprise a controller and one or more lighting devices. These can be ballast circuits, switches and dimmers but increasingly will feature sensors for occupancy and environmental controls used to automate lighting control and help reduce energy consumption. The DALI protocol is set out in the IEC 62386 technical standard, but DALI itself is a working group of leading manufacturers and institutions whose aim is to promote this technology as a means of ensuring interoperable lighting controls.

This article will review the origins of DALI as a wired lighting interface to understand how it works, where it applies, and the benefits offered. While DALI simplifies the design of lighting systems, implementing a compliant interface can initially seem daunting, both in terms of the communications protocol and meeting the prescribed signaling levels. Microcontrollers (MCUs) would seem to offer an obvious solution for encoding and formatting the control data and can be cost-effective even in the most basic lighting devices. However, MCUs typically operate on supply voltages of 5 V or less, posing the additional challenge of translating logic signals to the higher DALI levels of -6.5 V to 22.5 V.

Clearly, anyone who provides a more dedicated solution for DALI applications is going to be welcomed by designers of light sources and control devices. Fortunately, manufacturer STMicroelectronics (ST) offers a version of its ST7 8-bit microcontroller family that features a DALI communications interface as one of its on-chip peripherals. In addition to the DALI-enabled ST7DALIF2 MCU, ST also supports DALI applications with an evaluation platform that includes a hardware module design that achieves the voltage levels and other criteria for correct connection to a DALI network. A description of this solution, later in this article, is included to help further explain how DALI works.

The Digital Addressable Lighting Interface (DALI) was conceived to address a dilemma in the commercial lighting industry where the control of room lighting was in danger of becoming overly complex through the deployment of proprietary bus systems. This approach was itself a response to the need to provide more versatile control. This helped to overcome the limitations of hard-wired switches and analog signaling such as 0-10 V dimming controls. However, bus systems like EIB or LON were developed as building management systems (BMS) for the control of heating, ventilation, air-conditioning and blinds, as well as lighting. Consequently, it is no surprise to find that the high level of functionality these solutions provide comes at a price, which is not simply the cost of the components but also the expense of labor-intensive installation.

DALI delivers a much-needed compromise; it offers a flexible and intelligent alternative to analog room lighting controls, while also complementing building management systems, since it is possible to integrate DALI as a sub-system of more comprehensive BMS designs. Where DALI really wins out though is in providing a standardized solution that ensures the compatibility of products from different manufacturers. This not only allows the designers of lighting systems greater flexibility in their choice of lighting components, but also eases installation because there are no special requirements for the wiring of data cables. Furthermore, building owners benefit from being able to adapt or extend lighting to suit future needs, knowing that compatible light fitments and controls will be readily available. Finally, a standardized solution offers cost benefits stemming initially from the advantages of manufacturing in higher volumes for a wider market, resulting in lower equipment prices, through to shorter installation times due to contractors’ familiarity with DALI-compliant components and their common interface. 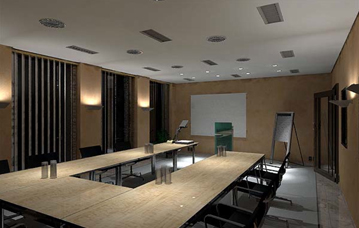 
The DALI standard is the responsibility of DALI AG, a working group that now numbers over 60 leading manufacturers and institutions in the field of digital lighting control. The first version of the standard, IEC 60929, defines the interface primarily in the context of dimmable fluorescent lamp ballasts to ensure the exchangeability of ballasts from different manufacturers. IEC 60929 is due to be withdrawn in 2014, having been superseded by IEC 62386, which now defines DALI as a single interface for all light sources and lighting controllers, including related components such as transformers, relay modules, sensors and emergency fittings. Hence, DALI succeeds the previous 0-10 V lighting controls systems and provides an open standard alternative to DSI (Digital Signal Interface), offering the advantages of interoperability, status feedback and advanced control. As an organization, DALI represents its members’ interests in developing opportunities and promoting the compatibility of compliant products bearing the DALI trademark, which assures end-users security of supply through multiple sources.

How does DALI work?

DALI uses a two-wire interface to communicate between up to 64 devices in a standalone network, arranged in either a bus or star topology. If required, DALI gateways allow larger numbers of devices to be addressed by connecting sub-systems together. Signaling is digital at nominal levels of 0 V and 16 V (actually between -6.5 V and +22.5 V, since each logic level is ±6.5 V) with data transferred using an asynchronous, half-duplex serial protocol at 1200 bits/s. The use of a differential signal combined with Manchester encoding ensures reliable operation even in the presence of significant electrical noise, enabling DALI wiring to run alongside mains cables or even within a multi-core cable carrying mains power. By operating at low voltage, there is no additional ballast safety insulation requirement (although the network cable is required to be mains-rated), while the inclusion of a diode bridge in the interface circuit avoids any concern over connection polarity. A maximum cable run of 300 m is specified assuming no more than a 2 V drop between the controller and the last device on the network based on the use of 1.5 mm² cross-section wiring.

DALI devices are assigned addresses, which, along with other settings, are stored within the device. Each device can be addressed either individually or as part of a group and each device can be a member of up to 16 groups. This allows the concept of different lights within a room being controlled according to different scenarios, or ‘scenes’ as they are referred to in the standard. So, for example, all the lights in a room might be part of a single group and be able to be switched to maximum output with a single command. Another group might be all the wall-lights, while a third group could be all the down-lights at the front of a meeting room with the remaining ceiling lights belonging to a fourth group. In this way a pre-defined scene might be ‘presentation mode’ with the front down-lights on, the wall lights dimmed to 50 %, and the other ceiling lights off (as shown in Figure 1), whereas when people are arriving or leaving the room all lights would be on full. To further simplify such configurations, each device can also store the required dimming setting for up to 16 scenes. Devices can also report their status so a controller can monitor devices such as light level or movement sensors and detect a faulty lamp.

As noted in the introduction, a simple, low-cost microcontroller with some basic on-chip peripherals can readily handle the DALI communications protocol, in terms of sending and receiving address and control signals as a serial data stream and storing and responding to all scene-setting commands. Even the need to implement Manchester encoding can be accomplished using general-purpose input/output (GPIO) ports together with an analog comparator for clock recovery. Certainly none of this is going to tax the performance of a modern MCU at the very modest data rates used by DALI. Nevertheless, ST’s ST7DALIF2 8-bit MCU, which integrates a DALI communication interface on-chip, is a very attractive proposition, simplifying the equipment designer’s task and speeding time to market while also ensuring a compliant solution.

The ST7DALIF2 device is a member of the ST7 microcontroller family and benefits from a common architecture with an 8-bit core processor running at up to 8 MHz with standard configurations of flash program memory, EEPROM data memory and RAM, and a set of peripherals comprising timers, I/O ports (including SPI) and an A/D converter with a fixed gain operational amplifier. Operation is from 2.4 to 5.5 V and the device features all the usual power-saving modes for when the application is idle or in standby. Different package options are offered to provide up to 15 I/O pins.

Clearly, what distinguishes the ST7DALIF2 from other members of the ST7 family is the on-chip DALI Communication Module (DCM), shown bottom right in the internal block diagram in Figure 2. 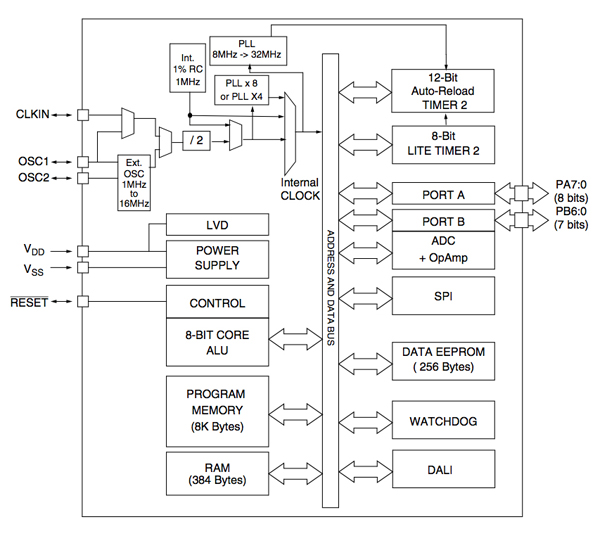 
The functionality of the DALI Communication Module (DCM) can best be appreciated by referring to its internal block diagram (Figure 3) in conjunction with the illustration of DALI standard frames (Figure 4). Integral to its operation are various registers, which store clock, address, data, control and control/status information. Register DCMCLK is used to tune the device’s clock to the DALI data rate, DCMFA provides the forward address and is combined with forward data from DCMFD plus the necessary stop and start bits to form a forward (i.e. transmit) frame. DCMBD receives data from the backward frame, with DCMCR and DCMCSR used to hold control and status settings. 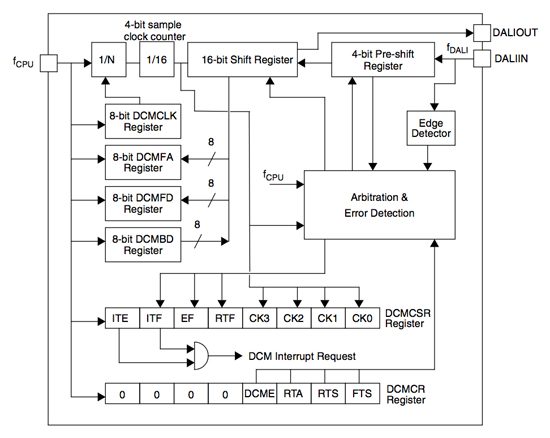 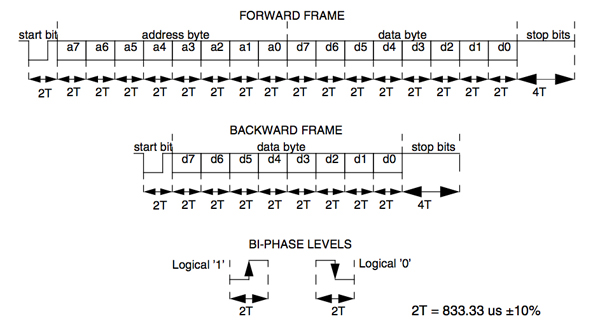 
The ST7DALIF2 MCU still only supports DALI signals at MCU logic levels. However, ST has developed the STEVAL-ILMOO1V1 as a hardware evaluation module for use with its STM8S-DISCOVERY kit, which works as a motherboard for the module but also comes with a DALI software library. This hardware module converts the MCU logic signals to the full DALI voltage levels with proper rise and fall times while also providing overvoltage protection against possible misconnection of mains voltages to the DALI wiring. The module is shown in Figure 5, and Figure 6 outlines its circuit schematic.

Although intended to allow users to learn more about DALI and its capabilities, the module provides a fully working DALI solution, which can be connected to and controlled by any DALI network. As such, it could be used in end-equipment as a plug-in interface module, but it equally provides a reference design that a lighting designer could incorporate directly in his/her own design. Indeed, as well as supplying the full schematic, ST also provides PCB layouts in the user manual for the STEVAL-ILMOO1V1 module. 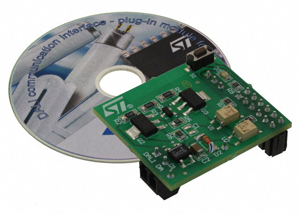 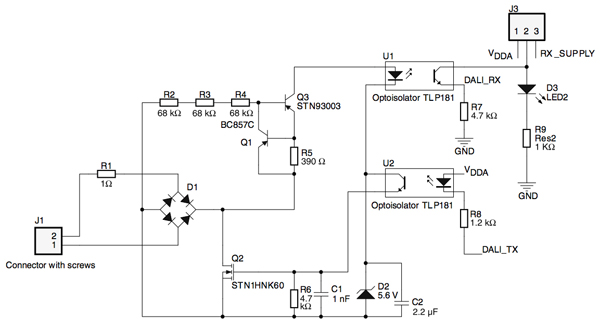 There are many potential solutions to the control of lighting in commercial buildings, ranging from traditional manual switch panels through to the sophistication achieved by building management systems. Requirements to avoid dedicated wiring, and provide flexibility with features for dimming, ambient lights sensing and motion detection, have spawned various control strategies and bus network solutions. However, it is only through the auspices of DALI AG that a standardized digital interface has been realized.

This article has looked at what DALI is and how it works, particularly with reference to the solution offered by STMicroelectronics with its DALI-enabled microcontroller and a circuit design that addresses the requirements to convert MCU logic levels to the signaling voltages specified by the DALI standard. Ultimately, what DALI achieves is the means of ensuring security of supply for those designing, installing and maintaining building lighting systems by enabling manufacturers to offer compliant products that users can confidently network together. Such standardization also confers cost benefits through manufacturing economies and ease of installation.