A simple thermocouple, combined with an analog front end, can provide a more robust, lower cost, wider-range alternative to other temperature sensors.


A simple thermocouple, combined with an analog front end, can provide a more robust, lower cost, wider-range alternative to other temperature sensors.

In 1821, Thomas Seebeck discovered the physical phenomenon that when two dissimilar metals are joined on both ends and one end is heated, a continuous current is created in the thermoelectric circuit.¹ If the other end is broken, a voltage can be measured that is proportional to the temperature difference between the heated junction (measuring or "hot" junction) and the open end (reference or "cold" junction) at which the measurement is taken. This physical property, called the Seebeck effect, is the basis of the thermocouple sensor.

Thermocouple sensors have several advantages that make them popular in many applications such as industrial, medical, and home appliances. Compared to other popular temperature sensors, such as Remote Temperature Diodes (RTDs), thermistors, and IC sensors, thermocouples are more rugged, less expensive, and can operate over the largest temperature range. Furthermore, thermocouples are passive sensors and thus don't require an electrical stimulus to operate, which minimizes system complexity. Along with their many benefits, it's important to fully understand thermocouples' electrical characteristics when designing with them. 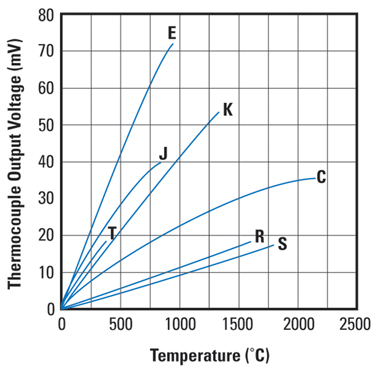 When designing with thermocouples, it's important to understand that they are bipolar, which means they can produce a positive or a negative voltage depending on whether or not the measured temperature is higher or lower, respectively, than the system temperature. 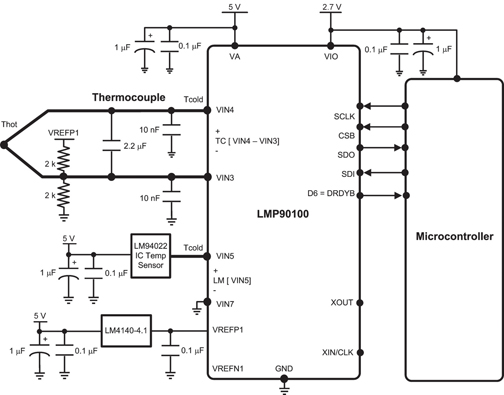 Amplifier specifications that are critical for thermocouple applications include low-offset error, low-RMS noise, and high Common-mode Rejection Ratio (CMRR). Since the typical output voltage of a thermocouple is in the µV range, it is crucial that offset voltage remain small and insignificant relative to the measured signal. To satisfy this requirement, the LMP90100 features true continuous background calibration for offset and gain. The true continuous background calibration of the LMP90100 essentially eliminates offset and gain errors across temperature and time for all gains and sample rates, providing measurement accuracy without sacrificing speed and power consumption. The net result is a precision solution with a typical offset voltage of 8.4 nV and a temperature drift of 0.125 nV/°C. Similarly, having an amplifier with low noise and a high CMRR will improve accuracy and reduce the potential effects of common-mode pickup. The LMP90100 offers noise less than 10 µV RMS and has a high 117 dB CMRR.

In addition to the LMP90100's precision performance, the sensor AFE offers rail-to-rail input and integrates sensor diagnostics. Rail-to-rail input capability allows designers to capture near ground signals, providing the best opportunity to measure temperatures that are at, or very near, the system ambient temperature. Sensor diagnostics allow the detection of open and short circuit conditions and out-of-range signals, without requiring user intervention, resulting in enhanced system reliability.

Thermocouples are popular because they are inexpensive, rugged, and operate over an extended temperature range. When designing with thermocouples, keep in mind the specific type, associated sensitivity, and the fact that they are bipolar devices. A differential amplifier configuration is a popular circuit that allows good CMRR performance. Depending on specific measurement requirements, developers may need to add level shifting to the circuit. Due to its low-noise, low-offset voltage, high CMRR, and rail-to-rail input capability, National's LMP90100 sensor AFE makes for a good fit in a thermocouple application.