Wireless power offers the potential for significant flexibility in product design and use. As consumers demand greater mobility in electronic products, the ability to recharge power-hungry products by simply placing them on countertops, dashboards, and other surfaces grows beyond a convenient feature to a practical necessity. Engineers can add efficient wireless power capabilities to designs, thanks to specialized solutions from Freescale Semiconductor, Integrated Device Technology, and Texas Instruments, among others.

Wireless power technology exploits fundamental electromagnetic principles to transfer energy from a power source to receiver using coils coupled either through magnetic inductance or magnetic resonance. A typical wireless system includes a power transmitter base unit and corresponding power receiver units included in mobile devices such as wireless headphones, smartphones, tablets, and the like.

In inductive power transmission, alternating current in a transmitter coil (L1) generates a magnetic field that induces a voltage in a paired receiver coil (L2) (Figure 1). The efficiency of power transfer between these paired inductors depends on the coupling factor (k) between the inductors and the inductors' quality factor (Q).

As shown in Figure 2, efficiency falls dramatically due to the reduction in coupling factor k with the increase in distance (z) between the inductors for a given relative size (D2/D) of the coupled coils. 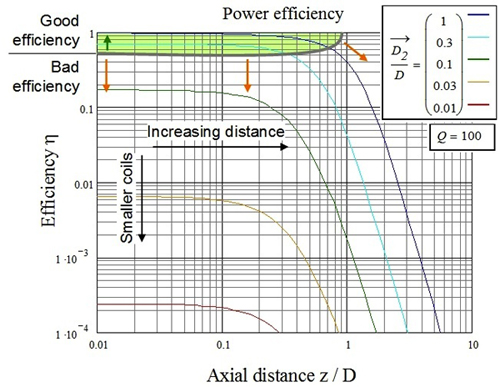 Figure 2: The efficiency of inductively coupled power transfer depends on the relative geometries and placement of coupled coils. (Courtesy of the Wireless Power Consortium.)

The impact of coupling factor k and quality factor Q becomes more apparent when stated in terms of power loss. For an inductively coupled wireless power system, the minimum power loss factor is given by:

where coupling factor k between transmitter and receiver coils is:

where L12 is the mutual inductance between L1 and L2, and Lnn is self inductance.

System quality factor Q is given by: 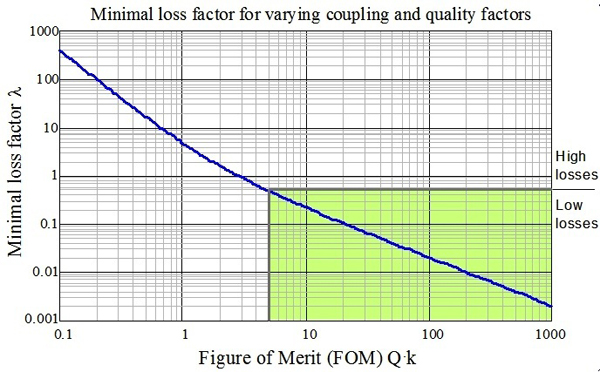 One of the concerns with inductive coupling power transfer is the marked reduction in coupling factor with increased distance or non-alignment of the receiver coil with respect to the transmitter coil. In contrast, magnetic resonance power transmission can transfer power wirelessly over greater distance with less dependence on relative orientation of the power receiver with respect to the transmitter. In this approach, two inductors are tuned to resonate at the same frequency and exchange energy through their coupled magnetic fields. Compared to inductive coupling, magnetic resonance enables a looser coupling between power source and receiver.

Although companies can choose custom approaches for wireless power transfer, standards-based approaches offer the clear benefit of interoperability, which is expected by consumers. Engineers looking to develop wireless power solutions will find a combination of proprietary standards associated with industry-leading products and open standards driven by industry consortia. Among the latter, the Alliance for Wireless Power (A4WP) industry group is focused on standards and technology based on magnetic resonance power transfer, while the Wireless Power Consortium (WPC) has focused largely on standards for inductive power transfer.

Standards for inductive power transfer have gained significant traction in the industry due to the availability of specifications developed by WPC members comprising companies ranging from semiconductor manufacturers to equipment makers. The WPC Qi (pronounced "chee") standard specifies standard wireless power transfer transmitter and receiver designs based initially on inductive technology. The WPC is also supporting designs based on magnetic resonance capable of supporting increased charging distances up to 4 cm at 5 W while remaining fully Qi compatible.

WPC Qi specifies a standard interface between a power transmitter and power receiver for contactless power transfer based on near-field magnetic induction between coils in the base station transmitter and mobile device receiver (Figure 4). The WPC standard operates at frequencies in the 100-205 kHz range with the ability to transfer about 5 W of power using a secondary coil with an outer dimension of around 40 mm while operating at very low standby power. At this power level, compliant wireless power systems can charge a broad range of devices from smartphones and cameras to media players and headsets.

Figure 4: A WPC Qi system transfers power wirelessly based on messages the transmitter receives by monitoring the reflected load controlled by the receiver. (Courtesy of Integrated Device Technology.)

After a mobile device is placed, a simple communications protocol allows the mobile device to control the power transfer. Here, the receiver transmits a control message by modulating an impedance network to encode messages. This amplitude modulation of the load results in a corresponding voltage change on the transmitter coil. The transmitter control subsystem demodulates this signal and adjusts the coil-drive output to achieve the required regulation of transferred power.

Figure 5: To communicate with the transmitter, a WPC Qi-compliant receiver can use capacitive modulation (A) to effect an amplitude change in the transmitter voltage (B). (Courtesy of Texas Instruments.)

Engineers can find a number of available silicon solutions designed for WPC Qi compliance. In fact, engineers can utilize MCUs with appropriate on-chip peripherals such as the Freescale Semiconductor MC56F825x/MC56F824x, Freescale RS08KB, and Texas Instruments C2000 family, among others. 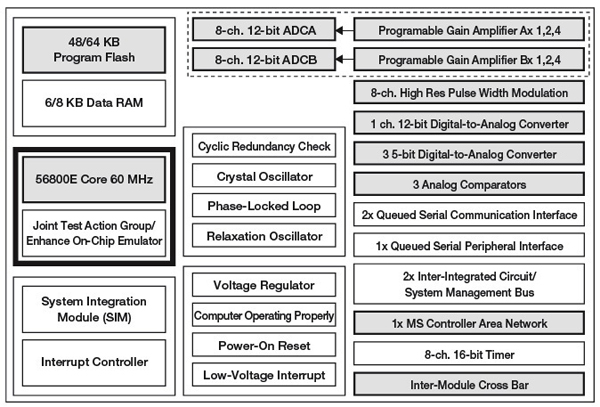 For applications such as battery chargers, the transmitter base station would typically need to power multiple receivers (Figure 8). In this type of application, a multi-coil transmitter subsystem could be powered by a high-performance device such as the Freescale MC56F825x/MC56F824x. In turn, receiver unit design could be based on a low-cost MCU such as the Freescale RS08KB 8-bit MCU family. RS08KB MCUs integrate ADCs, timers, and other peripherals needed for Qi-compliant wireless power. 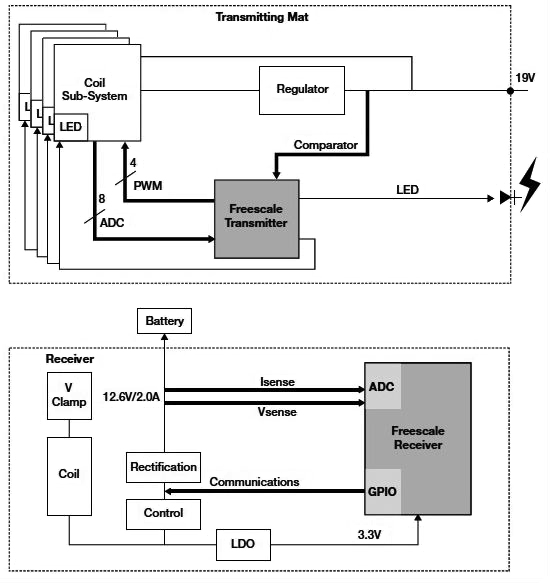 Integrated Device Technology offers its IDT9030 as a single-chip solution, requiring only external passive components to create a complete low-cost, Qi-compliant transmitter (Figure 9). The IDT9030 integrates a half-bridge inverter for DC/AC conversion of its 19 V input. In turn, the device controls output power by modulating the switching frequency of the half-bridge inverter from 110 to 205 kHz at a fixed 50 percent duty cycle required for a WPC A1 transmitter.

Figure 9: The IDT IDTP9030 is a single-chip solution that requires a minimal complement of external passive components to realize a Qi-compliant transmitter. (Courtesy of Integrated Device Technology.)

In a base station design, the IDTP9030 pings the surrounding area to detect a mobile device while minimizing idle power. In fact, the IDTP9030 itself consumes only about 9 mA when not loaded by a receiver. When it finds a receiver, the IDTP9030 continuously monitors communications from the mobile device using on-chip circuitry to demodulate and decode message packets sent by the receiver according to WPC specifications. Based on those messages, the IC adjusts the transmitted power accordingly by varying the switching frequency of the half-bridge inverter.

The WPC method for message transmission by transmitter loading limits communications to low-bandwidth communications. IDT addresses this in the IDTP9030 with a proprietary back-channel communications capability (Figure 10). Furthermore, the device provides an on-chip authentication capability for implementation of proprietary secure wireless power solutions. 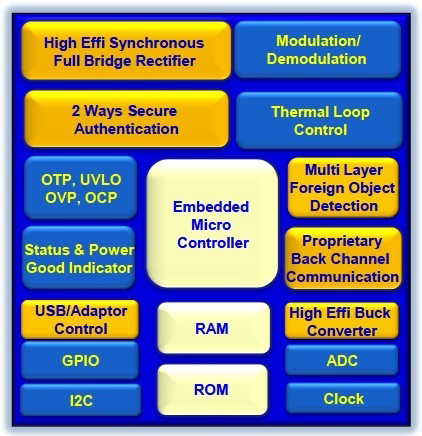 Texas Instruments offers a family of available devices for supporting design of second-generation (WPC V1.1) Qi-compliant wireless power systems. Devices such as the TI bq500211A and bq5101xB are designed to operate as a transmitter/receiver pair (Figure 11).

The TI bq500211A integrates the full set of capabilities required to control wireless power transfer at 5 V to a single WPC compliant receiver. The IC can work as a WPC type A5 transmitter with a magnetic positioning guide or as a WPC type A11 transmitter without the magnetic guide. For designs using free positioning, engineers can turn to the bq500410A, which can ping the environment for compliant devices.