Demand Will Soar for Lithium-Ion Batteries in Smart Grids

The growing use of smart grids will result in a surge in demand for lithium-ion cells.

The market for lithium -ion batteries used in smart grids will rise to nearly $6 billion over the next eight years, according to market researcher IHS. 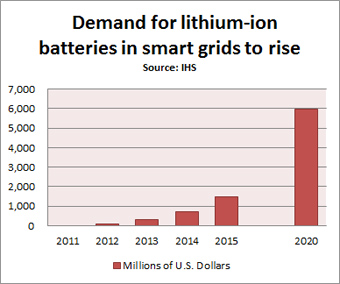 A smart grid is a utility electricity delivery system that uses computer and communications technology to improve the flexibility and efficiency of power distribution. With a conventional grid, power flows from large-scale power generators to users. Smart grids accommodate and control electricity that is generated both by big utilities and by businesses or people who may have solar or wind energy systems at their homes.

Smart grids use rechargeable batteries to adjust to fluctuations in demand and optimize the delivery of electric power throughout the system. Satoru Oyama, principal analyst for Japan electronics research at IHS, said lithium-ion batteries are "uniquely suited for use in smart grids."

Smart grid energy storage includes everything from single-home systems, to a cluster of homes or a building, to uninterruptible power systems for corporate information technology (IT) operations, to large-scale systems used by grid operators.

Energy storage is used for purposes running from grid stability to backup power for IT, even extending wind and solar energy capture into the evening.

Development and promotion of smart grids is being supported by various government initiatives. The U.S. has budgeted $4.5 billion for smart grids. China is expected to become the largest smart grid market in the world, expected to invest $586 billion in the electrical power supply infrastructure over the next 10 years, according to IHS.