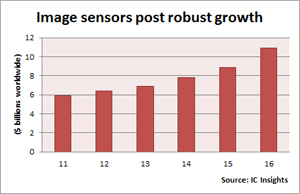 Strong demand from manufacturers of smartphones, media tablets, and automotive systems will drive the image sensor market to nearly $11 billion by 2016.New camera-equipped portable equipment, including touchscreen smart phones and media tablets, will drive demand for CMOS image sensors through 2016, according to researcher IC Insights.

While camera-equipped cell phones are the largest CMOS image sensor application, automotive systems are the fastest growing application with sales to that segment expected to reach $1.8 billion in 2016, IC Insights noted.

The transition to 300 mm production is good news for buyers because it will increase overall capacity and allow for price reductions over the next several years. “Average selling prices for image sensors overall, including CCDs and CMOS devices, are expected to fall at an annual average rate of 2 percent in the next five years,” said Rob Lineback, senior research market analyst for IC Insights. However, the average price of CMOS image sensors will drop 4 percent in 2012 after surging by 15 percent in 2011, said Lineback.

The increase last year was “primarily due to stronger demand for higher resolution devices that are making their way into more smartphones, and the beginning of growth in some new embedded camera applications, such as medical imaging systems and rearview cameras as options in more vehicles,” Lineback said.