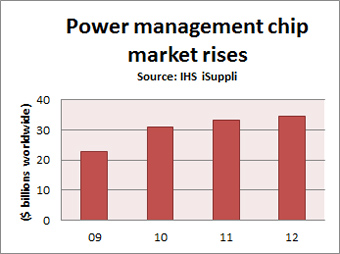 Despite a slowdown in consumer spending, the power management semiconductor market will end the year posting solid growth.Despite a slowdown in consumer spending and the supply disruption caused by the March earthquake in Japan, the global market for power management semiconductors will end 2011 growing 6.7 percent, according to market researcher IHS iSuppli.

The slowdown in revenue growth was due in part to a slowdown in consumer spending and as a result the Japanese earthquake, according to Marijana Vukicevic, an analyst for IHS iSuppli.

“After the Japanese earthquake near the end of the first quarter, power management suffered a deceleration as manufacturing halted in several areas of the country which is home to many semiconductor facilities operations,” said Vukicevic.

By September, most electronics production Japan resumed, but by then the industry was feeling the slowdown in consumer spending. The spending slowdown limited PM chip revenue growth to just 2.3 percent in the third quarter compared to the second, according to IHS iSuppli.

Revenue growth is not expected to improve in the fourth quarter because of sluggish demand for consumer electronics equipment such as wireless handsets and mobile computing devices – two big drivers of PM chips.

Consumer spending will not improve until the first half of 2012, according to Vukicevic.

Longer-term the outlook for the power management semiconductor market is more positive as it will post a compound annual growth rate of 7.2 percent over the next five years.

Demand will be especially strong for inverters, which convert direct current to alternating current. Inverter revenue will rise from $4.2 billion in 2010 to $7.5 billion in 2015, according to IHS iSuppli. Demand for them will be driven by automotive systems, solar and wind turbines, motor controls, appliances, and manufacturing automation.