CMOS imaging devices are being designed into more equipment, including automotive safety systems and medical imaging.

CMOS image sensor sales will grow 13 percent to a record high $5.1 billion in 2011, as more CMOS sensors are used in camera phones, digital cameras, automotive systems, and embedded webcams in laptops and tablet computers, according to researcher IC Insights. The previous record for CMOS image sensors was $4.6 billion in 2008.

Despite falling prices, CMOS image sensors will post strong growth through 2015, when the market will reach $7.6 billion. 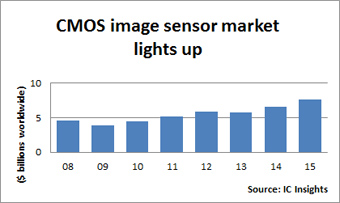 As prices for CMOS image sensors decline, the devices will be used in more equipment.CMOS imaging devices are expected to account for 66 percent of the total image sensor market in 2015, compared to about 58 percent in 2010. Charge-coupled devices (CCDs) still dominate consumer digital camera applications, video camcorders, scanners, and copiers. CCDs accounted for 42 percent of the image sensor market in 2010, but the percentage will drop to 34 percent in 2015, reported IC Insights.

CMOS image sensor production capacity at integrated device manufacturers (IDMs) and foundries has been moving from 200 mm to 300 mm wafers, driving up unit volumes and adding downward price pressure to the marketplace.

In fact, prices for CMOS image sensors declined about eight percent per year over the past five years. "In 2003, CMOS image sensors had an average selling price of just over $5," said Rob Lineback, senior market research analyst with IC Insights. In 2010 the average price was $2.54, up from $2.35 from the downturn year of 2009."