More semiconductor magnetic sensors are being used in medical and industrial equipment, and alternative energy systems. 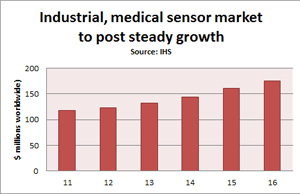 While revenue for magnetic sensors in industrial and medical one is small compared to other segments such as automotive or consumer wireless, it will continue to grow for years to come. By 2016, revenue for sensors in the medical and industrial segments will reach $175.5 million, posting a compound annual growth rate of 8 percent, according to IHS.

The main growth driver for magnetic sensors in the industrial market is renewable energy including solar energy systems and wind turbines, said Richard Dixon, principal analyst for MEMS and sensors at IHS. He noted that motors of all kinds consume an estimated 45 percent of all electricity generated worldwide, and magnetic sensors are often used to improve the efficiency of motors.

“As government legislation comes into play, this is acting as a boon for the sensors, implemented with an eye toward reducing energy consumption,” Dixon added.

The semiconductor magnetic sensor market consists of Hall-effect and magneto-resistive semiconductor integrated circuits (ICs). They are used to track rotational speed and linear angles in machines and devices, or to detect and process magnetic fields to establish positioning.

Sensors are also used in many medical devices where some form of motor control is involved, such as pumps. Medical devices account for about 30 percent of magnetic sensor revenue, while industrial applications account for 70 percent.

Magnetic sensors are used in medical devices for motor control, in applications such as ventilator machines; infusion, insulin and syringe pumps; or kidney dialysis machines.

Another example of medical use for these sensors is in simple centrifuges for preparing samples. The sensors contribute to smooth control of small motors, making them quieter and more reliable.