Demand for 32-bit Microcontrollers Will Rise

Automotive and industrial control applications are helping drive the transition to 32-bit MCUs. 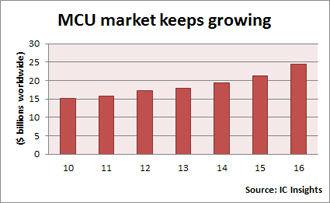 The 32-bit microcontroller segment will help drive overall MCU revenue through 2017 when the market will total $17.1 billion.Buyers can expect stable leadtimes and declining prices for 32-bit microcontrollers for the rest of the year despite stronger demand, according to market researcher IC Insights.

The average price of a 32-bit MCU will fall 5% in 2013. The bad news for buyers is that the overall average price for microcontrollers will increase 4% this year, the researcher says. Despite the higher average price, the overall MCU market will decline about 1% in 2013 as sales total $14.95 billion.

The price increase will be short-lived and confined to 2013 as the average annual price will fall about 3% per year through 2017, according to IC Insights.

During that time, the global MCU market will post 2% annual growth as sales reach $17.1 billion in 2017. Much of that growth will be due to the 32 bit segment.

“We are in the growth stage with 32-bit MCUs,” says Ross Bannatyne, general manager MCU mass market product line for NXP, based in The Netherlands. “There is strong demand for 32-bit products and we’re seeing some good signs with our products.” 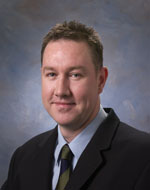 “We are in the growth stage with 32-bit MCUs,” says Ross Bannatyne, general manager MCU mass market product line for NXP.Thirty-two-bit devices improve the performance of many electronics systems.

John Donaghey, director of channel marketing, MCUs for Dallas-based Texas Instruments says MCU business overall was decent for TI in the first part of the year.

Perhaps, but the 32-bit MCU segment will “rise incrementally over the next few years,” forecasts Brian Matas, vice president of market research for IC Insights. “There's been a significant shift over the past few years to 32-bit.” 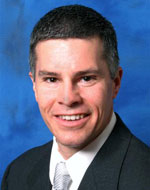 “The MCU market is a fragmented and diverse market,” says John Donaghey, director of channel marketing, MCUs for Texas Instruments.Automotive systems are becoming more sophisticated and need 32-bit MCUs. Such systems include active cruise control, park assistance and collision avoidance in which the MCU helps to regulate speed so the car stays a safe distance behind another vehicle.

“Automotive accounts for the biggest portion of microcontroller consumption,” says Matas. “Forty percent of MCU sales will be to the automotive segment in 2013.”

However, automotive is not the only segment that will drive 32-bit demand. Demand for 32-bit devices is growing in the industrial control, home and building, and consumer product segments, adds Bannatyne.

“A big part of our portfolio are things like MCUs that drive graphic LCD displays,” he says. “Those tend to be used in industrial control or building automation.”

Thirty-two-bit devices improve the performance of many electronics systems.

Bannatyne says there is also growing demand for 32-bit MCUs in USB and gaming products and accessories. And demand is growing for ARM-based microcontrollers because of its nonproprietary core and its "big ecosystem.”

“The MCU market is a fragmented and diverse market,” Donaghey explains. "It is one of the things that keeps us excited about the MCU segment."

He adds there are some industrial and automotive applications that need “lower power types of MCUs. In those cases we offer our 16-bit MSP430.”