The Color Correlated Temperature (CCT) of light is defined as "the temperature of the Planckian radiator whose perceived color most closely resembles that of a given stimulus at the same brightness and under specified viewing conditions."


The Color Correlated Temperature (CCT) of light is defined as “the temperature of the Planckian radiator whose perceived color most closely resembles that of a given stimulus at the same brightness and under specified viewing conditions.”

It is a useful definition for engineers, and helps them to classify the output of white LEDs under such groupings as “cool white,” “neutral white,” and “warm white.” The consumer is less interested in the scientific definition, but is nonetheless fussy about the illumination from LED-powered lighting used in domestic, business, or industrial premises.

This article explains what CCT is and shows how it is used to classify commercial white LEDs for lighting applications. Finally, we will look at why solid-state lighting manufacturers go to the trouble of offering devices covering the full range of CCT light sources.

How white is white?

Despite their obvious benefits over traditional lighting – such as efficacy, lifetime, and compactness – LEDs have faced some resistance to adoption for consumer lighting. Although the evidence is somewhat anecdotal, detractors claim that “harshness” of the light given off by a white LED-based lighting fixture is not as pleasant to live with as the “warmth” of an incandescent bulb.

LED makers, keen to meet the aspiration of their customers, have worked hard to develop LEDs that more closely match the color (or “temperature”) of the illumination given out by traditional sources.

To quantify the color of light, the industry has adopted the method established by the Commission Internationale de l'Eclairage (CIE) in 1931. The organization defined a chromaticity (color) space described in terms of three coordinates, x, y, and z. In this space, the x, y coordinates define the color and z the luminance of a light source. Monochromatic wavelengths are indicated around the edge of the color space envelope (for example, blue at 465 nm, green at 530 nm, and red at 620 nm).

Figure 1 shows the CIE xy 1931 chromaticity diagram. This diagram includes a Planckian locus (black line) that corresponds to the color that an incandescent “black body” would appear to radiate with changes in temperature (the color temperature defined in kelvins (K)). By way of background, a black body is an entity that absorbs all incident electromagnetic radiation, regardless of frequency or angle of incidence. Such a body in thermal equilibrium (that is, at a constant temperature) emits electromagnetic radiation according to Planck's law, meaning that it has a spectrum that is determined by the temperature alone, not by the body's shape or composition.¹ 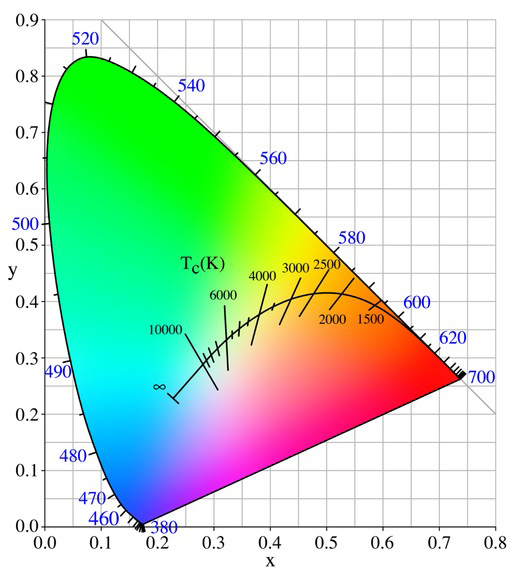 The lines intersecting the locus represent constant CCT, where the perceived color most closely resembles that of an ideal radiator at the same brightness and under specified viewing conditions. (See TechZone article “LED Specs - Understanding the Color White”.) Manufacturers of white LEDs attempt to fabricate products that emit light of a color that is on, or close to, this locus.

There are several ways of generating “white” light from LEDs, but the most popular is to combine a blue LED with yttrium aluminum garnet (YAG) phosphor. A proportion of the blue light from the LED is absorbed by the phosphor, which then re-emits it as white light due to a phenomenon called Stokes shift (see the TechZone article “Whiter, Brighter LEDs”).

Figure 2 shows the relative spectral emission from an OSRAM OSLON SSL white LED (this chip produces 126 lm at 350 mA with an efficacy of 116 lm/W). Note that the spectrum is not a homogenous mix of wavelengths; rather large peaks occur in the blue region (the direct contribution of the LED), with a further hump in the yellow/red region produced by the phosphor. Nonetheless, the combination of these wavelengths is a pretty good approximation of white, certainly good enough to fool the human eye. 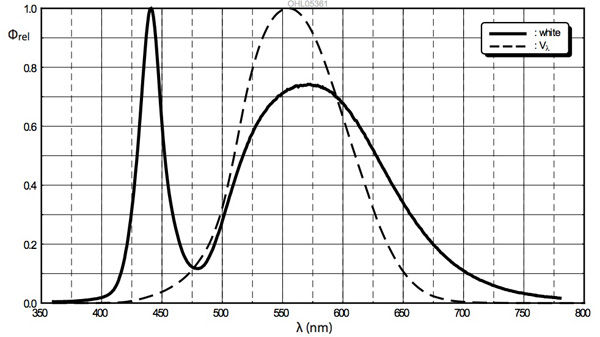 By making slight changes to the phosphor chemistry, manufacturers can alter the CCT of a white LED. Figure 3 shows how the spectra of white LEDs with different CCT vary. This example shows LEDs from Cree’s XLamp XM-L2 family. These chips produce 310 lm at 700 mA with an efficacy of 153 lm/W.

Note that the “warmer” white LEDs actually have lower CCTs. The output from these devices contains more red wavelengths, which shifts the radiation toward the cooler end of the Planckian locus even though human perception dictates that the color is warm. “Cool” white LEDs emit more blue, and the radiation is classified as hotter, although again, humans have an alternative perception that determines the light is cooler.

Manufacturers produce white LEDs with outputs classed as “warm white” (2600 to 3700 K CCT), “neutral white” (3700 to 5000 K CCT) and “cool white” (5000-to-8300 K). It is impossible to reliably manufacture LEDs of exactly the same color. Even devices from the same batch have slightly different spectra. Instead, manufacturers group devices with similar CIE color coordinates into “bins.” The groupings are determined by small quadrilaterals on the CIE color space with vertical sets of these quadrilaterals having the same CCT. Figure 4 illustrates the binning principle. (See the TechZone article “Decoding LED Bin Labels”.) 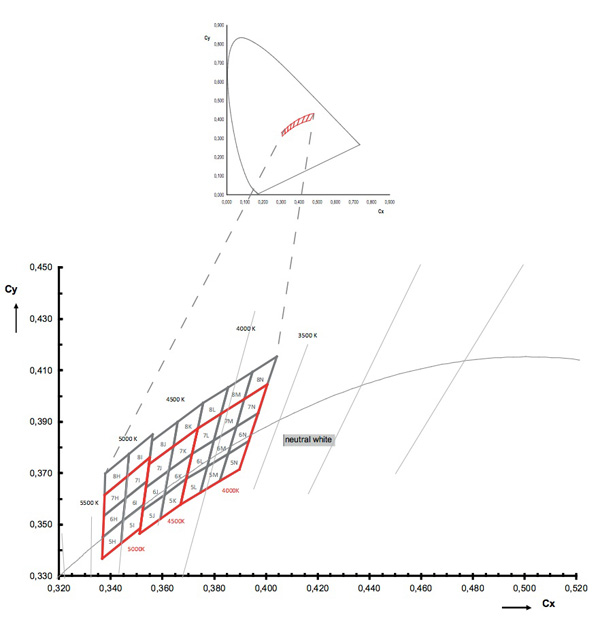 Figure 4: Each quadrilateral on the CIE color space defines a bin that comprises LEDs of the same nominal color. Vertical sets have the same CCT. (Courtesy of OSRAM.)

Engineers considering which type of white LEDs to use for their next lighting project are faced with a tough decision, as no single color will suit all markets.

Some manufacturers have tried to overcome regional variations by developing LEDs that emit a full spectrum of wavelengths in order to mimic daylight, reasoning that this is a good tactic because human eyes are perfectly adapted to such a light source. However, two challenges have stalled this approach. First, for technical reasons, “daylight” white LEDs have a relatively low upper limit on maximum efficacy compared to other white types. Second, it turns out that many consumers – perhaps because they have grown up with warm white incandescent lighting – do not like the “harshness” of the light from these devices.

Other LED makers have followed the lead established by manufacturers of fluorescent lamps. These LEDs have been designed to meet consumer preference in the target markets. In the U.S., for example, warm white is dominant, while in Japan, neutral white is preferred. Other countries prefer even higher CCT (cooler) tubes, up to 7,500 K. To make things even more complex, consumers prefer different light for their work premises; for example, 4200 K is common for office lighting in the U.S. (See the TechZone article “Spectral Design Considerations for White LED Color Rendering.”)

The good news is that once engineers have narrowed down the choice, they will find that the major manufacturers such as Cree, OSRAM, and Seoul Semiconductor offer white LEDs covering the full range of CCT. Seoul Semiconductor’s latest Acrich Multi Junction Technology (MJT), for example, offers the MJT 3528 – a 107 lm at 40 mA, 82 lm/W chip – across a CCT range of 2,600 to 7000 K. Alternatively, the MJT 6540 is offered as a replacement for fluorescent tubes across the CCT range common to these light sources of 4,000 to 6,500 K. This chip produces 29 lm at 20 mA and has an efficacy of 112 lm/W.