Replacing directional incandescent or halogen lamps with LED luminaires promises energy cost savings and longer-lasting lights. Installing these luminaires is getting much easier as manufacturers develop and market units (even incorporating built-in drivers) that work by connecting to a suitable power supply.

To get the optimum result, a lighting designer considers more than just plugging in the light and switching it on. Two LED light sources with the same nominal luminosity can produce different illumination; where one unit might be satisfactory, the overall performance of the other could make it unsuitable for the target application.

To ensure that the light source can perform the job for which it’s intended – and that quantitative comparisons can be made between different types – engineers can refer to documents that detail their selected product’s photometric characteristics.

This article takes a look at this data and explains how to decode the spec sheet to enable detailed comparison of new light sources with older lighting technologies in order to ensure that intended like-for-like replacement is successful.

The Illuminating Engineering Society of North America (IESNA) has developed a comprehensive test method for testing the absolute photometry (i.e., intensity and distribution of light) of solid state lighting (LEDs).

Besides information about the performance of the luminaire, such as luminous flux (i.e., total light output in lumens) and efficacy (lumens/Watt), the test also determines luminous intensity distribution.

This information is especially useful to the lighting designer because it provides a measure of where the luminaire directs its light output. A spotlight, for example, generates a different pattern of luminous intensity distribution compared with a down light designed for general illumination (Figure 1).

The prescribed method in LM-79 for displaying luminous intensity distribution data is a tabular format and a polar graph. The polar graph allows an engineer to assess whether the luminaire has a “narrow” or “broad” distribution, gauge its symmetry, and determine absolute or relative intensity on the light’s axis. 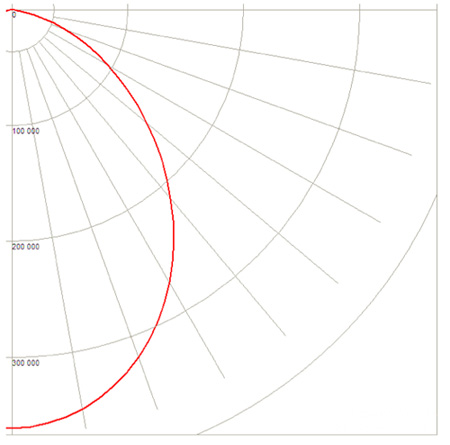 In this example, the brightest point for this luminaire, perhaps not surprisingly, is directly below the lamp (0°, 365.33 cd). As the vertical angle increases, the power of the beam decreases, falling to zero at 90°. As only one side of the polar graph is reproduced, it can be assumed the beam is symmetrical about 0°.

Two important parameters are determined by the luminous intensity data: central beam candle power (CBCP) and beam angle. CBCP is the candlepower (candlepower is directly equivalent to the magnitude in candela [cd] at 0°, in this case 365.33 cd). Beam angle is determined as the point at which the light intensity decreases to 50 percent of the maximum. In Figure 1, this point (365.33/2 = 182.67 cd) occurs at a vertical angle of approximately 46°. Because the light is emitted in a symmetrical cone, the beam angle is twice this vertical angle, or 92°.

It’s useful to compare this luminous intensity distribution data with that for halogen MR16 lamps, for example, to determine if the LED product will provide the intensity and distribution needed for equivalent lighting applications¹. 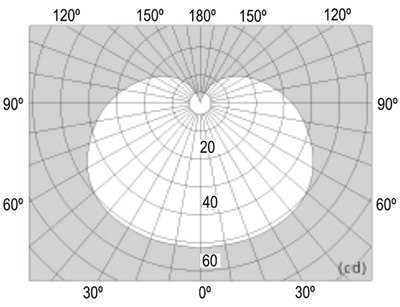 Note that some manufacturers choose to display the information in a different way. Figure 4 shows the luminous intensity data for Seoul Semiconductor’s AX32X1 Acriche LED module. The figure is a hybrid graph with a linear plot on the left hand side and a polar graph on the right. The manufacturer hasn’t specified a CBCP, instead choosing to plot the relative luminous flux. In this case, the beam angle is about 106°. 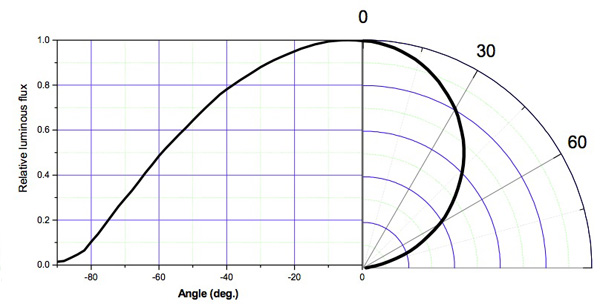 LM-79 testing also provides useful information in the form of an isoilluminance plot (Figure 5). This is a description of a tested product’s predicted illuminance pattern and resulting initial light levels, expressed in footcandles (fc), a non-SI unit defined as “the illuminance cast on a surface by a one-candela source one foot away.”

The diagram uses contour lines to delineate the light pattern and relative horizontal illuminance levels below the tested product, with a conversion chart included for different mounting heights. The scale of the x and y axes is expressed in multiples of the mounting height, so it’s important to convert to actual distances and use the same mounting heights when comparing with other products. 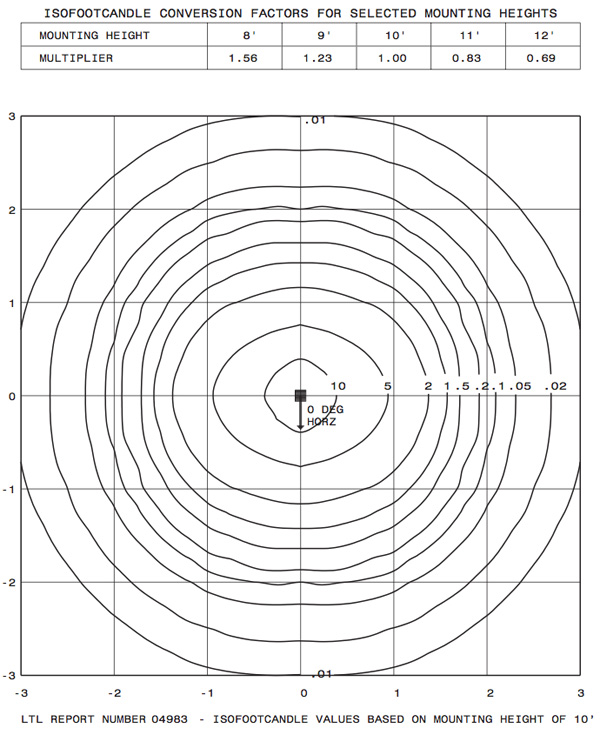 Figure 5: Isoilluminance plot for LED lighting module. Contours show relative illuminance levels and x and y axes are in units of the mounting height, in this case 10 ft. (Courtesy of Luminaire Testing Laboratory)

The momentum to replace inefficient light sources with environmentally friendly LEDs is gathering pace. Lighting engineers need to be aware that LEDs are a very different light source from traditional incandescent bulbs and fluorescent tubes.

The difference isn’t just in the way light is generated – by electroluminescence in an LED (see the TechZone article “Understanding the Cause of Fading in High-Brightness LEDs”), radiation from a heated filament in incandescent bulbs, and ultraviolet light that then causes a phosphor to fluoresce in a tube – but also in the way the light is directed and distributed.

Standardized testing provides information on the latest lighting modules and is enabling designers to make the correct choice of LED lighting module for the intended application, to maximize the potential of this unique light source.