A look at boost converters with output voltages at 70V and above from suppliers including Analog Devices, Linear Technology, Maxim Integrated, and Micrel.


Whether it is used for biasing avalanche photodiodes (APDs) found in optical receivers, driving photoflash tubes in flash cameras, or charging high-voltage capacitors, the need for high-voltage sources continues to grow. Consequently, in battery-powered units where the input supply voltage is low, step-up or boost DC/DC converters are required to generate voltages that can be several times the input. To address these requirements, suppliers such as Analog Devices, Linear Technology, Maxim Integrated, and Micrel Inc., among others, have produced boost converters with output voltages at 70 V and above.

This article examines such solutions and discusses the topologies and techniques used by each to boost output voltages by ratios of 10:1 or better in order to generate high-DC voltages from very-low DC inputs.

According to Analog Devices’ application note AN-1126,¹ there are several DC/DC converter topologies for obtaining relatively high (>10:1) boost ratios. These include simple boost, charge-pump multiplied boost, and tapped-inductor boost, as shown in Figure 1. While there are many advantages delivered by each topology, these techniques also have noteworthy drawbacks for delivering significant power at large boost ratios. 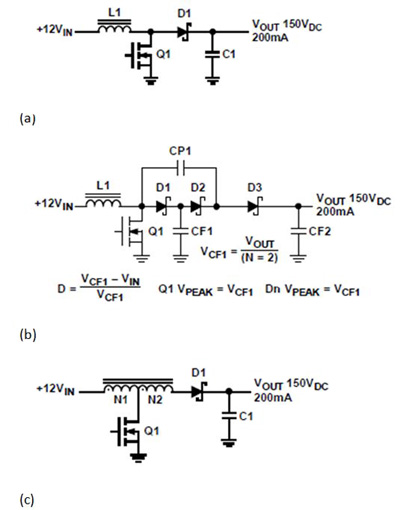 With tapped-inductor boost topology, the voltage stress on the output rectifier is high, and it suffers from the effects of transformer leakage inductance, according to ADI. This leakage inductance causes voltage spikes and ringing, which, in turn, causes EMI and increases voltage stress on both the MOSFET and the output rectifier. Although such effects can be controlled with snubbers, it wastes power and results in additional components and board space.

ADI’s application note AN-1126 proposes a new converter topology that overcomes the drawbacks of conventional topologies to deliver significant power at large boost ratios with minimum voltage and current stress imposed on the switches. This allows moderately rated MOSFETs and Schottky rectifiers to be used while operating at moderate duty cycles for easier continuous-conduction-mode (CCM) and PWM control. Additionally, it avoids voltage spikes and ringing associated with transformer leakage inductance.

Again according to ADI’s application note, the single-ended primary inductance converter (SEPIC) multiplied boost converter (Figure 2) achieves all of the above goals by reducing voltage and current stresses on the main switch and rectifiers, as well as reducing peak-to-peak voltage swing on the switch node to significantly curb switching losses, EMI, and noise. Plus, it operates at moderate duty cycle to enable CCM with simple current-mode control. As a result of all of this, it allows easy component selection trade-offs in terms of cost and performance.

There are also some disadvantages of the SEPIC multiplied boost technique. Besides increasing the number of series-connected rectifiers, which increases the total rectifier forward-voltage drop resulting in higher losses, it also increases circuit complexity and the number of parts. What’s more, the SEPIC multiplied boost technique is not recommended when the input and output voltages are both high.

Using the fixed-frequency, current-mode step-up controller ADP1621 in SEPIC multiplied boost configuration, ADI engineers have built and tested a 12 VDC input to 200 VDC output boost converter at 250 mA output current (Figure 3). In this design, 60 V-rated MOSFET and Schottky rectifiers are used, and the comparator ADCMP354 (U2) serves as an input undervoltage lockout (UVLO). The boost converter demonstrated efficiency exceeding 91 percent according to ADI. Component selection for this circuit is discussed in detail in the ADI application note. 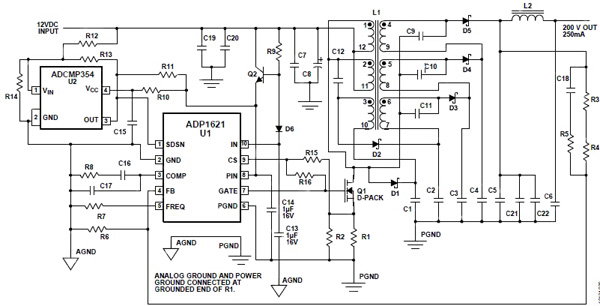 For photoflash and strobe devices that operate by discharging a high-voltage capacitor into a bulb, Micrel has developed a boost flyback charger circuit using switching regulator MIC3172. As depicted in Figure 4, the circuit is simple and reliably produces 300 VDC from a low input voltage of 3 to 10 VDC to charge a high-voltage capacitor. It provides safety and isolation via the flyback transformer. As discussed in Micrel’s Application Note² 20, the preset output voltage is determined by the resistive divider (R1, R2, and R3) and internal 1.24 V reference of the MIC3172. It is calculated as:

The circuit uses a minimum number of components to reduce board space and increase reliability. Micrel indicates that the voltage across the capacitor is increased with each switching cycle until it reaches the preset voltage; once this voltage is reached the MIC3172 stops switching. Since energy leakage in the output components causes the capacitor to discharge over time, the MIC3172 provides occasional pulses of energy to keep the capacitor fully charged, Micrel says. When the output capacitor is discharged into the bulb the charging process is repeated. 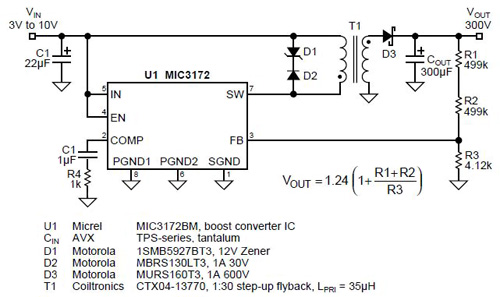 Similarly, to bias APDs in optical receivers, Linear Technology has developed a current-mode step-up DC/DC boost converter designated LT3571, which can generate an output voltage of up to 75 VDC from input as low as 5 VDC. It features a high-side fixed-voltage-drop APD current monitor with better than 10 percent relative accuracy over the entire temperature range. The integrated power switch, Schottky diode, and APD current monitor enable a small-footprint solution at low cost. It combines a traditional voltage loop and a unique current loop to operate as a constant-current or -voltage source. Application details are elaborately discussed in the product’s data sheet. For similar applications that need around 2 percent accuracy for APD current monitor, Linear offers its LT3905 with narrower-input voltage range.

In conclusion, engineers will find that there are several suppliers of step-up or boost DC/DC converters with relatively high boost ratios. However, each solution is unique and has its own advantages and disadvantages. Consequently, the designer must carefully read the product’s data sheet to ensure that it will generate the desired solution for a given end application.