Safety at work has become ingrained in the industrial culture and is viewed as important for workers and employers looking to benefit from a good safety record.

Rigorous attention to safety at work has become ingrained in the industrial culture of developed economies. Safety is viewed as important not only for workers but also for employers, who understand the financial and reputational benefits of a good safety record.

Safety-oriented regulations cover numerous aspects from the working environment and practices to the design of equipment used in the workplace. Machinery must meet essential health and safety requirements (EHSRs), such as those listed in the European Machinery Directive 2006/42/EC, to ensure the health and safety of machine users and others who may be affected.

Safety Standards and the Machinery Directive

Machine design is subject to a system of standards that extends to cover a wide range of risk reduction and safety-protection mechanisms. At the highest level, type A standards include ISO12100, which sets out basic concepts and design principles that are applicable to all types of machines and also makes reference to risk assessment and risk reduction. At a lower level, type B1 standards set out general requirements for safeguards and type B2 standards apply to particular safety devices.

Among the type B standards, those set by the International Standards Organization (ISO) tend to focus on machinery and management, while International Electrotechnical Commission (IEC) standards are concerned with electrical and electronic safety systems. ISO standards include ISO13849-1 covering safety-related parts of control systems. IEC standards, on the other hand, include IEC60204 concerning electrical equipment in general, IEC61496 for electro-sensitive protective equipment, and IEC62046 for equipment designed to detect the presence of persons.

Equipment marketed in Europe must be shown to comply with the Machinery Directive 2006/42/EC, which aims to establish common minimum standards for the health and safety of new products. These common standards are expected to facilitate trade and the free movement of goods between member states. The Directive references ISO12100 and the ISO and IEC Type A and Type B standards, as well as Type C standards that cover particular types of equipment such as forming machinery or industrial sewing machines. Meeting the specifications of the ISO and IEC standards helps machine designers demonstrate compliance with the Machinery Directive.

As far as design principles are concerned, the expected approach is to design out hazards where possible and implement protective systems where necessary to minimize risks. These protective systems may take the form of physical guards that prevent personnel entering hazardous areas or placing fingers, hands or limbs in harm’s way. By preventing such intrusions, which can result in personal injury, physical guards can enable machinery to operate continuously for long periods without interruptions from emergency stop signals. This can help maximize productivity.

On the other hand, sensor-based systems that detect intrusion and trigger an alarm or stop the machine can allow greater flexibility and permit easier access for replenishing consumables or carrying out routine maintenance. Some applications may call for a combination of physical guarding where frequent access is not required, and intrusion detection where easier access is desirable or a barrier is not practicable.

The D4BS switch has up to two normally closed (NC) contacts and incorporates a direct-acting mechanism that opens the contacts if the safety barrier is opened. A number of built-in features prevent malfunctions or incorrect operation, such as a special operation key for activating the switch. This key is designed exclusively for use with the D4BS and will not work with any other switch type. In addition, a built-in shearing-force mechanism ensures reliable separation of the contacts as soon as the switch is actuated by forcibly pulling apart the NC contacts. This ensures that any abnormalities such as contact welding will not prevent correct operation of the switch.

As far as intrusion detection is concerned, light curtains are commonly used to protect operators by causing the machine to stop. A combination of transmitters and receivers set up an array of light beams, and generate an alert if one or more of the beams are interrupted. The Panasonic SF4B series of light curtains has three variants comprising the SF4B-F, which is optimized for detecting intrusion by human fingers, the SF4B-H for hand detection, and the SF4B-A for arm/foot detection. The SF4B-F can detect objects as small as 14 mm in diameter, which gives designers extra flexibility to use light curtains in compact machines in accordance with the standard ISO13855 governing the positioning of protective equipment. Other important selection criteria for light curtains include the protected height and protected width. Light curtains such as the SF4B series, which features a small distance from the edge of the assembly to the center of the first beam, can be connected together to extend the protected area without introducing dead zones.

When designing a light curtain into machinery, muting capability may be needed to allow the machine to operate normally without stopping when a workpiece enters the machine, for example on a conveyor. This ensures the light curtain will only generate a stop signal when human intrusion is detected. Proximity sensors placed near the conveyor, as shown in Figure 1, enable the system to detect the presence of a workpiece and mute the associated light beams for the duration the workpiece is passing. If non-muted light beams are interrupted the system assumes an intrusion has occurred. Some types of light curtain may require a separate controller to interpret signals from the proximity sensors. The SF4B series has muting control built in, which allows proximity sensors to be connected directly to the light curtain with no need for an external muting controller. 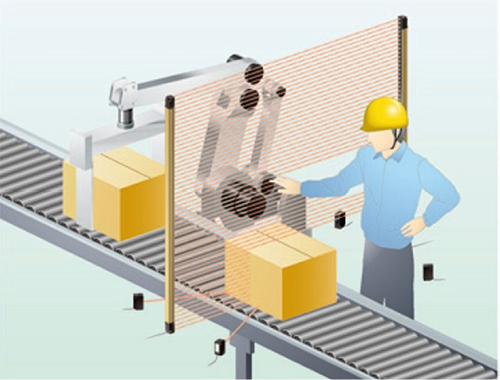 Figure 1: Proximity sensors help discriminate between a passing workpiece and intrusion by a human operator.

An inductive proximity sensor such as the Panasonic GX-F12B can be used for muting control. It provides the benefit of a long sensing distance and a stable temperature characteristic that ensures consistent performance independent of the time of day or the season.

In a basic machine-safety system, detectors such as door switches and light curtains are typically connected to the inputs of a reliable safety relay such as the Omron G7S. The relay responds to the switch or sensor signal by signaling a contactor to turn off the applicable motor drive in order to stop the machine. Figure 2 illustrates a simple safety system built around a safety relay. 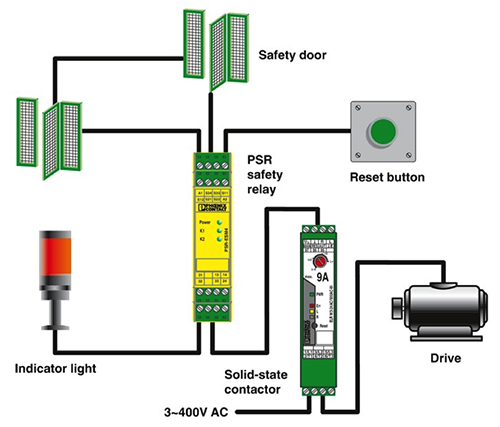 A critical difference between a safety relay and a standard relay is that the safety relay has forcibly guided contacts. These ensure enhanced reliability, and allow abnormal relay operation to be detected in the event that one set of contacts becomes stuck, for example due to welding. If a normally-open (NO) contact becomes welded while the relay is energized, normally-closed (NC) contacts on the same relay will not close when the coil is de-energized. Conversely, if an NC contact becomes welded, NO contacts on the same relay will not close when the relay is energized. The ISO 13849-1 functional safety standard requires that safety relays should comply with EN 50205. EN 50205-compliant relays such as the G7S are designed to ensure an air gap of at least 5 mm between open contacts.

If the safety system requires a large number of safety relays, to handle inputs from multiple sensors, a safety PLC may be needed. Alternatively, a software-configurable safety module such as the Phoenix Contact 2986012 can allow a compact and economical solution. The 2986012 has twenty safe inputs and four safe outputs, as well as additional alarm, clock and ground-switching outputs. Using a configurable safety module, it is possible to monitor several safety functions with a single device. The monitoring system can also be extended if required by adding extra safe I/O modules, as shown in Figure 3. 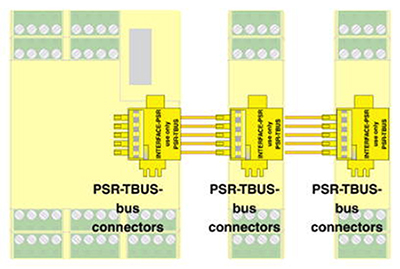 As well as protecting the health and safety of operators, complying with machine-safety standards can help equipment producers win the confidence of customers and strengthen their position in the marketplace.

An effective yet relatively simple safety system can be built around one or a small number of safety relays, which provide a highly reliable mechanism for stopping the machine in the event of a safety breach. A variety of mechanical and optical sensors are available, such as open/close switches, proximity sensors and light curtains, to inform the relay instantaneously when safety is put at risk. If extra inputs are needed, calling for a large number of safety relays, a software-configurable safety controller can provide a cost-effective alternative.