Energy budgets are one of the biggest challenges in the design of remote sensing and control platforms.


Whether for a wireless thermostat/occupancy sensor in a “Smart” building, a module that tracks the location and condition of cargo containers, or an implantable medical monitoring device, energy budgets are one of the biggest challenges in the design of remote sensing and control platforms. These sophisticated systems, which combine microcontrollers, sensors, and wireless communication technology must operate for years (and sometimes decades) on the limited power available from small batteries or energy harvesting systems. Developing an energy budget that insures your product will achieve its target service life can be a bit of a “black art”, but there are a few relatively simple techniques that can help you achieve the right balance of performance and power consumption.

Part one of this two-part article will begin with a review of energy sources, including energy harvesting options and the capacities and characteristics of the most commonly-used batteries, followed by a look at the other system elements typically found in a low-power wireless node. Using this information, we will explore the issues involved with preparing a basic energy budget in Part two of the series.

While their functions may vary widely, nearly every remote sensing and control element is comprised of a similar set of basic system elements. Let’s look at these one at a time.

No matter how good a battery is, it will eventually run out of energy. For applications that require an “infinite” service life and battery replacement is not an option, designers can choose from several forms of energy harvesting technologies to power their electronics. Capable of transforming the energy from captured light, mechanical vibrations, heat and even background RF into electrical power, these technologies can often justify their higher initial cost with the maintenance-free, near-infinite service life they provide.

Following is a brief sampling and review of available energy harvesting technologies.

These systems are based on a piezo-electric transducer that produces a small electrical charge when exposed to shock or vibration. They are rugged, long-lived, and have a wide temperature range. A typical piezo-electric system consists of the transducer, an energy management chip that converts the transducer’s irregular, spiky output into useable voltage, and a thin-film battery or capacitor to store the captured energy.

Piezo-electric transducers are available from manufacturers such as Measurement Specialties and Midé Technology. Some of the most commonly-used energy management solutions for piezo-electric include Cymbet’s EnerChip EP Energy Processors and Linear Technologies LTC3588-1/2 series of piezo-electric energy harvesting power supplies.

Since many wireless sensor applications are used indoors, their photovoltaic collectors must be able to provide energy from whatever ambient light is available from the fluorescent or incandescent lighting systems near which they are placed. Several manufacturers including Sanyo Energy offer compact thin-film PV cells that are optimized for these conditions. Clare offers compact solar cells packaged in SOIC form factor so they can be mounted directly to a system PCB.

If you want to experiment with PV power for your application, both Microchip and Texas Instruments offer development kits that integrate one of their low-power MCUs with a complete energy harvesting system. Microchip’s XLP 16-bit Energy Harvesting Development Kit is based on its robust 16-bit PIC24F16KA102 MCU and Cymbet’s EVAL-08 Solar Energy Harvester reference design. Cymbet’s energy harvesting technology also powers Texas Instruments’ EZ430-RF2500-SEH (Fig. 1) Solar Energy Harvesting development system which is based on their versatile MSP430 processor and includes a low-power 2.4 GHz radio subsystem 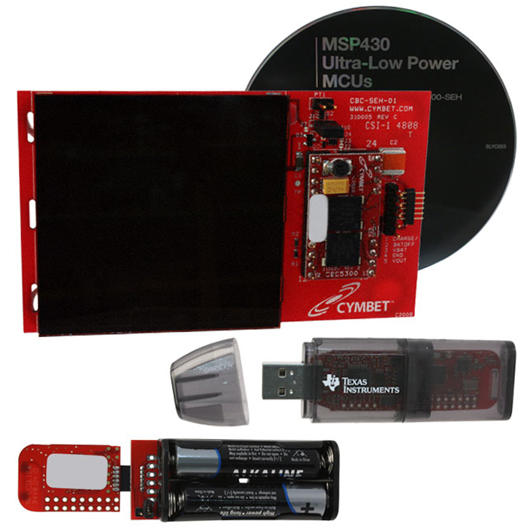 Unlike plug-in power supplies, batteries bring a complex series of variables to your design process. The electro-chemical processes they use to produce the electrons for your system have dozens of characteristics which affect battery performance, in some cases, as much as its nominal capacity rating. For the purposes of this article, we will focus on the ones which are of primary concern to the low-power, long-life applications discussed earlier.

A battery’s Nominal Voltage is the voltage it produces when fully charged and in a lightly-loaded state. This is not to be confused with its Open Circuit Voltage which varies both with the cell’s state of charge and the load it was subjected to prior to measurement. Discharge Voltage is the terminal voltage when the battery’s energy capacity has dropped to 20 percent of its rated value.

A battery’s Energy Capacity is technically defined in Joules, a function of both its current capacity and its terminal voltage as defined by the following equation:

While units of Joules are a more consistent way to compare batteries with different chemistries, most manufacturers use mA-hr on their spec sheets as a matter of convenience. While simpler, it can be the actual number of mA-hr available from a particular battery that varies.

Self-Discharge Rate is a term used to describe the speed at which a battery loses its current capacity over time. The term is a bit of a misnomer because the charge loss is actually due to both the slow but steady reaction of its anode and cathode materials that occurs even under open-circuit conditions and the deterioration of the battery as its seals, separator plates, and other mechanical components age. A battery’s self-discharge rate is dependent on the temperature at which it is stored and tends to increase as it gets warmer.

Shelf Life is defined as the time an unused battery retains 80 percent or more of its original charge. Since this is directly related to its self-discharge rate, it also varies as a function of temperature. Capacity/time plots (Fig.2) illustrate how elevated temperatures can dramatically accelerate the aging of both alkaline- and lithium-based cells. 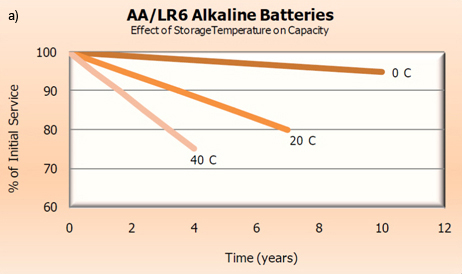 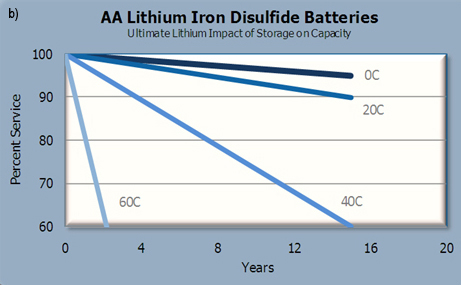 Figure 2: Battery life vs. temperature for alkaline (a) and lithium-iron (b) cells. (Courtesy of Energizer Battery Manufacturing)

Energy Density is a quantity that describes the battery’s energy-to- weight ratio, usually in terms of Joules/kg. As a general rule, the higher the energy density a battery technology has, the more costly it is.

The table below (Fig.3) lists the primary characteristics of most commonly-used primary (non-rechargeable) battery chemistries. 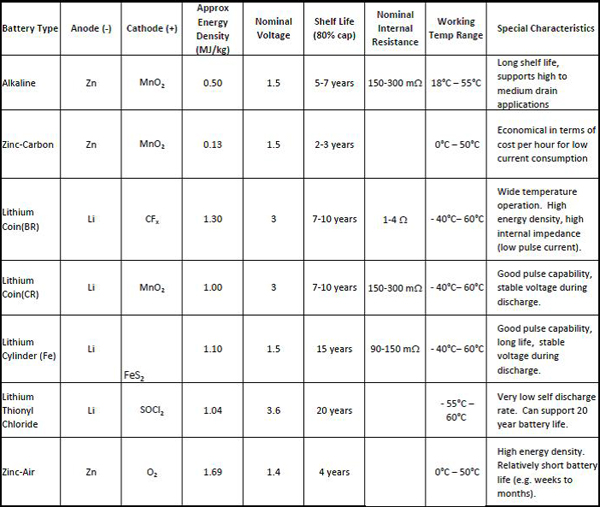 There are also several more complex sets of variables that determine a battery’s operational performance. For example, a battery’s ability to deliver current to its load is a function of the rate at which its chemicals can react and the Internal Resistance. For most common battery chemistries, a cell’s available current capacity (and self-discharge rate) increases as its temperature rises. Meanwhile, its internal resistance tends to increase beyond its nominal value as a function of its drain current and depth-of-discharge.

The resulting electro-chemical ballet swirling within the battery’s innards affects its Steady-State capacity - the amount of energy it can deliver at a given Drain Rate. For some battery chemistries, including conventional alkaline cells (Fig.4), their useable capacity falls off dramatically at higher drain rates. 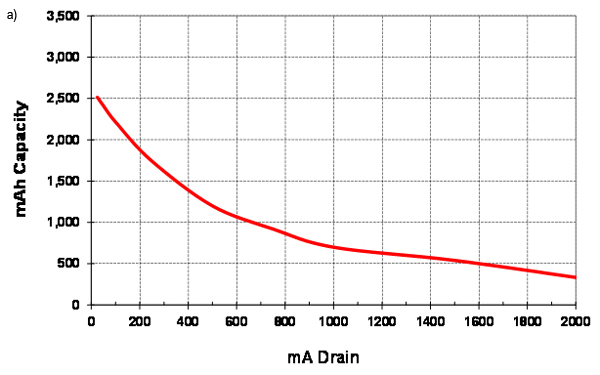 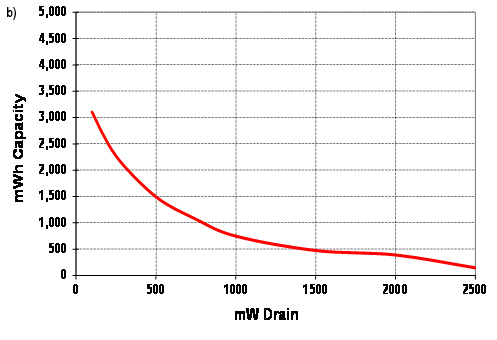 Figure 4: The discharge curves for an alkaline AA cell demonstrate how its usable current capacity (a) and energy capacity (b) varies significantly with the drain rate of a given application. Courtesy of Energizer Battery Manufacturing)

Internal resistance also affects its Pulse Current capability - the maximum current it can deliver for short intervals without excessive losses. A battery can often produce peak energy levels that are much larger than its maximum steady state but, if its internal resistance is too high, the short pulse of high current will result in a sharp drop in the output voltage. Depending on the battery’s size and chemistry, managing peak current levels can be a major issue a battery-based system. This is a special consideration for lithium coin cell batteries, whose high internal resistance often results in current limits of about 10 mA. Likewise, designers using alkaline cells must be careful to make sure their system’s peak current requirements do not exceed the battery’s end-of-life capabilities since the battery’s internal impedance can grow from 100-150 mΩ at the start of service to as much as 800 mΩ.

Most MCU manufacturers offer at least one product line that has been fine-tuned for low energy consumption. These power-optimized devices feature peripheral devices that can run while the CPU is inactive, multiple run/sleep modes, and other features that help stretch battery life. Depending on how much processing power you need, you can find low-power 8-bit products like Atmel’s AVR8 processors or Silicon Lab’s C8051F family, and energy-optimized 16-bit processors like Microchip’s (Fig. 5) PIC 24F series and Texas Instruments’ extensive line of MSP430 MCUs. There are even some 32-bit machines like Energy Micro’s ARM Cortex-based Gecko family that deliver high performance while drawing as much or less power than many 16-bit architectures. 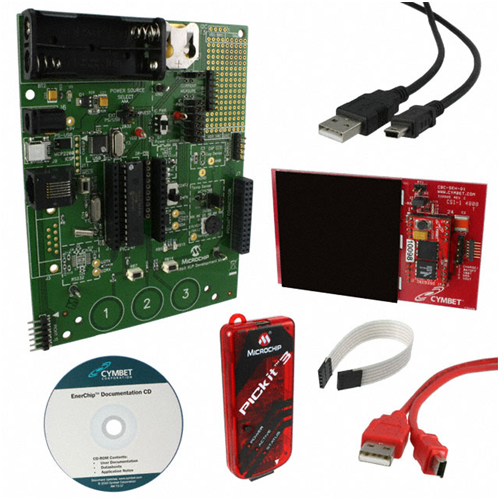 Most MCUs have some degree of on-chip analog capability, typically in the form of analog-to-digital and digital-to-analog converters (ADC/DAC), but many applications require external signal conditioning circuitry. This can include simple filtering with passive elements or active signal conditioning using op-amps or discrete transistors. In many cases, digital I/O connections also require some analog front end (AFE) noise reduction or protection against voltage spikes. Design and management of AFE elements is an often-overlooked opportunity for trimming a power budget.

Remote sensor platforms usually include a low-power radio subsystem which operates on one of the unlicensed ISM channel available in the 260-470 MHz, 860-960MHz, or 2.4-2.5MHz bands. Many solutions employ ZigBee or another protocol based on the IEEE 802.15 wireless standard but many others choose to “roll their own” protocol that is tailored to the packet size, data rate, and security requirements of their particular application.

With a good understanding of the elements that will go into our application and the energy systems that will power it, we can begin creating an energy budget. The particulars will be covered next month in part two of this article, along with strategies for fine-tuning your design to extend its service life, or accommodate the limitations of your available power source.