The brushless DC (BLDC) motor is becoming increasingly popular because, as the name implies, it does away with the wear-prone brushes used in traditional motors, replacing them with an electronic controller that improves the reliability of the unit.


The brushless DC (BLDC) motor is becoming increasingly popular because, as the name implies, it does away with the wear-prone brushes used in traditional motors, replacing them with an electronic controller that improves the reliability of the unit. Moreover, a BLDC motor can be made smaller and lighter than a brush type with the same power output, making it suitable for applications where space is tight.

Because there is no mechanical or electrical contact between the stator and rotor of the BLDC motor, alternative arrangements are required to indicate the relative positions of the component parts in order to facilitate motor control. BLDC motors use one of two methods to achieve this, either employing Hall sensors or measuring back EMF.

Doing away with sensors

A BLDC motor does away with the wearing components that make up the mechanical commutator of a conventional unit (improving reliability). In addition, BLDC motors offer high torque/motor size ratio, fast dynamic response, and virtually silent operation.

BLDC motors are classified as synchronous devices because the magnetic fields of the stator and rotor rotate at the same frequency. The stator comprises steel laminations, slotted axially to accommodate an even number of windings along the inner periphery. The rotor is constructed from permanent magnets with from two-to-eight N-S pole pairs.

The BLDC motor’s electronic commutator sequentially energizes the stator coils generating a rotating electric field that ‘drags’ the rotor around with it. Efficient operation is achieved by ensuring that the coils are energized at precisely the right time.

Sensors work well, but add cost, increase complexity (due the additional wiring), and reduce reliability (due in part to the sensor connectors that are prone to contamination from dirt and humidity). Sensorless control addresses these drawbacks.

Taking advantage of back EMF

The windings of an electric motor act like a generator as they cut through magnetic field lines. A potential is generated in the windings, measured in Volts and called an electromotive force (EMF). According to Lenz’s law, this EMF gives rise to secondary magnetic field that opposes the original change in magnetic flux driving the motor’s rotation. In simpler terms, the EMF resists the motor’s natural movement and is referred to as a “back” EMF. For a given motor of fixed magnetic flux and number of windings, the magnitude of the EMF is proportional to the angular velocity of the rotor.

Manufacturers of BLDC motors specify a parameter known as the back EMF constant that can be used to estimate back EMF for a given speed. The potential across a winding can be calculated by subtracting the back EMF value from the supply voltage. Motors are designed such that when they are running at rated speed, the potential difference between the back EMF and supply voltage will cause the motor to draw the rated current and deliver the rated torque.

Driving the motor beyond the rated speed increases the back EMF substantially, decreasing the potential difference across the windings, and in turn reducing current and lowering torque. Pushing the motor faster still would cause back EMF (plus motor losses) to exactly equal the supply voltage - at which point the current and torque will both equal zero.

Because back EMF detracts from the motor’s torque, it is sometimes considered a disadvantage, but, in the case of BLDC motors, engineers have turned the phenomenon to their benefit. 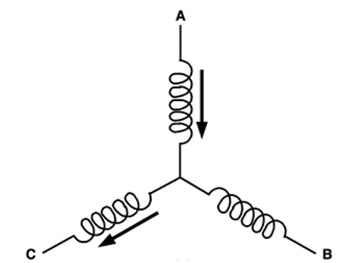 Figure 1: First of a six-stage electrical cycle for a BLDC motor. Coil A is energized positively, B is open, C is energized negatively (Courtesy of Microchip).

A BLDC motor using Hall sensors uses the output from the devices – controlled by an MCU and operating through a driver – to switch insulated-gate bipolar transistors (IGBT) or metal oxide semiconductor field-effect transistors (MOSFET) to correctly sequentially energize the coils. The transistors are triggered (and coils energized) when the Hall sensor output changes state.¹

In the sensorless variant of the BLDC motor, there are no Hall-effect sensors. Instead, as the motor rotates, the back EMF in the three coils varies in a trapezoidal waveform (long-dashed lines) shown in Figure 2. For comparison, the same figure also shows the outputs from the Hall sensors of a similarly configured motor. 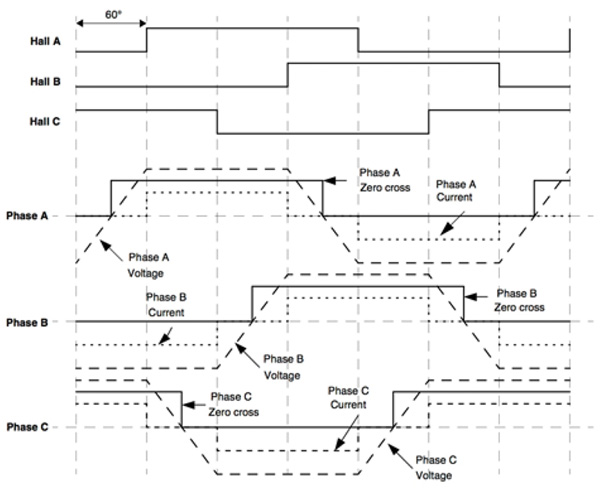 A combination of all three zero crossing points for the coils is used to determine the coil energizing sequence. Note that there is a phase difference between an individual Hall sensor changing output in a conventional BLDC motor, and the back EMF zero crossing point for an individual coil in a sensorless unit of 30 degrees. Consequently, in a sensorless motor control circuit, after the zero crossing point is detected, a 30-degree phase lag is built into the firmware before the next action in the energizing sequence is activated. In Figure 2, the short-dashed lines indicate the current in the coils.

Figure 3 shows a control circuit for a sensorless three-phase BLDC motor. In this case, the circuit uses a Microchip PIC18FXX31 8-bit MCU to generate the pulse width modulated (PWM) outputs to trigger the IGBTs or MOSFETs in the three-phase inverter bridge. The MCU reacts to input from a back EMF zero-cross detect circuit. 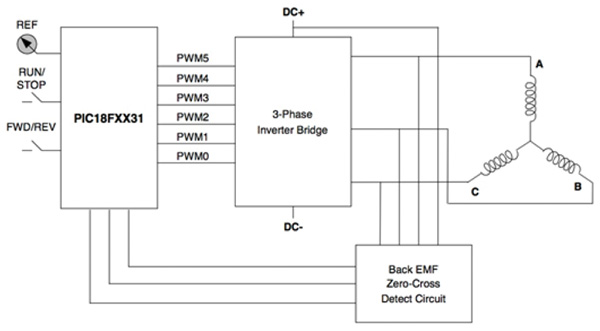 Methods for detecting back EMF

There are several techniques for measuring the back EMF. The simplest is to compare the back EMF to half the DC bus voltage using a comparator. Figure 4a shows a schematic of such a system. In this case, the comparator is connected to coil B; a complete system would have a comparator connected to every coil. In the figure, coil A is positively energized, coil C negatively energized, and coil B is open. The back EMF rises and falls as the energizing sequence for this phase is implemented.

The main drawback of this simple comparator method is that the three windings may not have identical characteristics resulting in a positive or negative phase shift from the actual zero crossing point. The motor likely still run, but may draw excessive current.

A third method is to employ analog-to-digital converters (ADC) (Figure 4c). Many of the MCUs available for BLDC motor control include high-speed ADCs suitable for this purpose. With this method, the back EMF is attenuated so that it can be fed directly to the MCU. The signal is sampled by the ADC and then compared with a digital value corresponding to the zero point. When the two values match, the coil-energizing sequence indexes to the next step. This technique offers some advantages, such as allowing the use of digital filters to remove high-frequency switching components from the back EMF signal.² 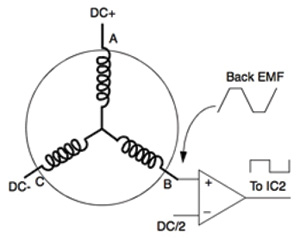 Figure 4a: Simple comparator circuit for measuring back EMF (Courtesy of Microchip). 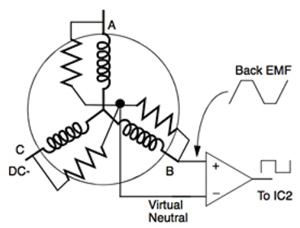 Figure 4b: The simple comparator circuit can be improved by implementing a virtual neutral point (Courtesy of Microchip). 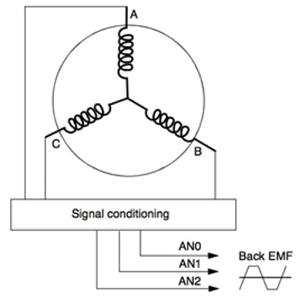 Figure 4c: The signal is sampled by an ADC and then compared with a digital value corresponding to the zero point (Courtesy of Microchip).

There is one major disadvantage to sensorless BLDC motor control; when the motor is stationary, no back EMF is generated, depriving the MCU of information about the stator and rotor position.

The solution is to start the motor in an open loop configuration by energizing the coils in a pre-determined sequence. While the motor is unlikely to operate efficiently, it will start rotating. Eventually, the speed will be adequate to generate enough back EMF for the control system to switch to normal (and efficient) closed-loop running.

Because back EMF is proportional to the speed of rotation, sensorless BLDC motors may not be a good option in applications that require very low speeds. Here, BLDC motors with Hall-effect sensors may be a better choice for the job.

The increasingly popularity of sensorless BLDC motors has provided the catalyst for semiconductor vendors to develop chips specially designed for the job of controlling and driving such units. The control system for the motor typically comprises an MCU teamed with an IGBT – or MOSFET – driver.

There are many MCUs available for sensorless BLDC motor control, ranging from simple low-cost 8-bit devices to higher-performance 16- and 32-bit devices that all boast the minimum peripherals required to drive the motor. These peripherals include three-phase PWMs, ADCs, and comparators for overcurrent protection.³

Zilog offers its Z16FMC family of 16-bit MCUs for sensorless BLDC motor control. The company says that the job requires an MCU with fast interrupt response to handle PWM updates in real time. The Z16FMC provides automated interoperation between the ADC and timer and between the comparator and PWM outputs. Figure 5 shows a block diagram of the Zilog motor control MCU. 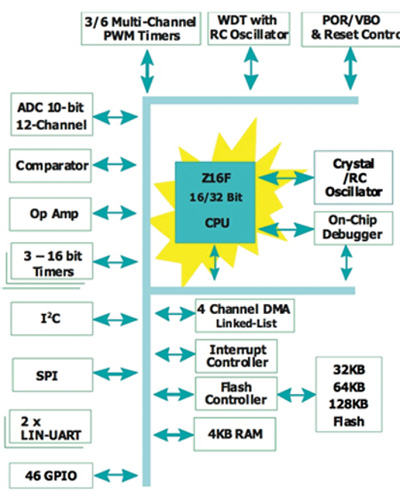 The Microchip PIC18F2431 is also popular MCU for sensorless BLDC motor control. The chip uses an 8-bit processor and can operate at speeds up to 16 MIPS. Variants in the PIC18F family incorporate a three-phase motor control PWM peripheral with up to eight outputs and a 10- or 12-bit ADC.

For its part, Texas Instruments (TI) offers a motor control evaluation kit for three-phase BLDC units. According to the company, the DRV8312-C2-KIT (Figure 6) – based around the DRV8312 PWM motor driver – is a sensorless field-oriented control (FOC) and sensor/sensorless trapezoidal commutation platform that speeds development for quicker time to market. Applications include sub-50-V and 7 A brushless motors for driving medical pumps, gates, lifts, and small pumps, as well as industrial and consumer robotics and automation.

A multitude of applications

Sensorless BLDC motors are simpler and potentially more reliable than units that use Hall-effect sensors, especially if the application is in a dirty and humid environment. The motors rely on measurement of back EMF to determine relative positions of stator and rotor so that the correct coil energizing sequence can be implemented.

One disadvantage is that no back EMF is generated when the motor is stationary, so startup is affected by operating in open loop. Consequently, the motor can take a short time to settle and run efficiently. A second disadvantage is that at low speeds the back EMF is small and difficult to measure, which can result in inefficient operation. The use of sensor-equipped BLDC motors in these applications should be considered.

However, for a multitude of other applications, engineers can take advantage of compact and powerful sensorless BLDC motors. Using MCUs and IGBT- or MOSFET-driver chips designed specifically for the job can ease the design process. Development can be furthered streamlined by taking advantage of evaluation kits from major vendors that provide reference circuits for proven sensorless BLDC motor solutions.