Even though SSL bulbs consume less power and use it more efficiently, heat is still an issue.


Accidentally touching an incandescent light bulb that has been switched on for a long time presents an unpleasant surprise. Solid-state lighting (SSL) bulbs, on the other hand, are only warm to the touch.

An incandescent bulb produces light by heating a filament until it produces photons. Only about 10 percent of the energy that goes into an incandescent bulb is turned into light, while the remainder is converted into thermal energy that radiates from the bulb's surface. In contrast, an LED – a semiconductor light source that puts the ‘solid-state' in SSL – directly converts most of the electrical energy into photons. Consequently, an SSL bulb is more efficient than an incandescent bulb. Moreover, the light-transmitting surface of an SSL bulb won't burn your hand when you touch it.

Even though SSL bulbs consume less power and use it more efficiently, heat is still an issue. However, it's an issue in a different way. The process of converting electrical energy into photons does generate heat in a very small area of the diode. An SSL bulb's conversion process is more efficient than an incandescent bulb because it produces the most light possible for any given amount of current when the junction temperature is at or below a specified value. The key to keeping an SSL bulb shining brightly for as long as possible is preventing the junction temperature from exceeding the specified value, a process known as thermal management.

There are several different ways to execute thermal management in SSL bulbs. One recent approach is to use metal core printed circuit boards (MCPCBs) (Figure 1). MCPCBs use a base metal as an integral heat spreader and a dielectric polymer layer with high thermal conductivity and low thermal resistance. MCPCBs, such as those from Bergquist, are used in many LED modules offered today.

Traditional solutions, such as thermally conductive gap fillers, adhesives, greases and pads from Bergquist, ITW Chemtronics, Panasonic-ECG and Wakefield, are also useful for ensuring complete heat transfer. Heat sinks designed for use with LED lighting, such as those from Advanced Thermal Solutions and CTS Thermal Management Products, rapidly dissipate heat into the surrounding environment. 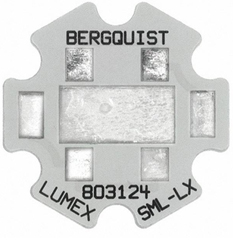 Figure 1: Mounting an LED on a metal core printed circuit board (MCPCB), such as the one pictured here from Bergquist for a Lumex LED, helps keep the diode's junction temperature below what is specified for the best and longest lasting performance. (Source: Bergquist)