Contactless Sensing with the Hall Effect

It covers the use of devices such as A1324 from Allegro and AD22151 from Analog Devices in applications from motor control to switching, as well as the HMC1052 family of magnetoresistive current sensors from Honeywell. The AS5510 from ams shows how increasing levels of integration can further reduce the complexity of sensor-based actuator designs using the Hall Effect.

Contactless sensing with the Hall Effect

Contactless sensing through the Hall Effect is becoming a key technology for motor control and appliances. The effect provides a low-cost combination of both sensing and switching that simplifies the cost and implementation of a design, but can also open up new design opportunities. For example, using the magnetic-sensing capabilities and integrating orthogonal Hall sensors can produce an effective low-cost compass. 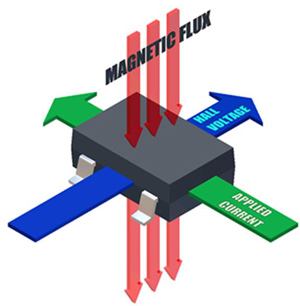 Figure 1: The Hall Effect happens when a current is influenced by a perpendicular magnetic field.

The Hall Effect happens when an electric current flowing through a conductor is influenced by a magnetic field (see Figure 1), generating a small voltage. This voltage occurs perpendicular to the current and the magnetic field, providing key information on the strength but more importantly the position and orientation of the field.

The effect has been integrated into integrated circuits using the silicon as the conductor, giving greater reliability and durability over the more traditional reed and mechanical switching devices. The device also has the ability to sense fields that are shielded by non-ferrous materials, providing key advantages in areas such as motor control.

Several different types of Hall Effect devices are available, suitable for applications ranging from switches and linear magnetic field sensors to current sensor ICs and devices that can detect speed and direction.

A linear Hall Effect sensor generates an analog or pulse-width-modulated (PWM) output that is directly proportional to the applied magnetic field, and simpler version of this can be used as a switch with operating and release points.

The sensors can be used either ‘head on’ or in a ‘slide-by’ mode. The slide-by method typically results in better sensing precision than the head-on method due to its smaller magnet travel. The large magnetic slope between the poles makes it possible to obtain very precise switch point locations. However, the slide-by method also requires the use of strong magnets and a small total effective air gap (TEAG) (see Figure 2). 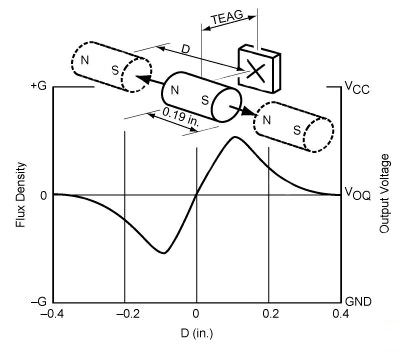 
Linear output Hall Effect devices are being increasingly used for measuring displacement, angular position, and current measurement. These applications need high accuracy in a small package, and the Allegro A1324, A1325, and A1326 aim to provide this with temperature-stable devices in SOT23W miniature surface mount packages.

The BiCMOS sensors provide a voltage output that is proportional to the applied magnetic field with a quiescent voltage output of 50% of the supply voltage. Each device integrates a Hall element, temperature-compensating circuitry to reduce the intrinsic sensitivity drift of the Hall element, a small-signal high-gain amplifier, a clamped low-impedance output stage, and a proprietary dynamic offset cancellation technique.

The A1324/25/26 feature factory programmed sensitivities of 5.0 mV/G, 3.125 mV/G, and 2.5 mV/G, respectively, for industrial applications requiring high accuracy, and are guaranteed through an extended temperature range of –40°C to 150°C. 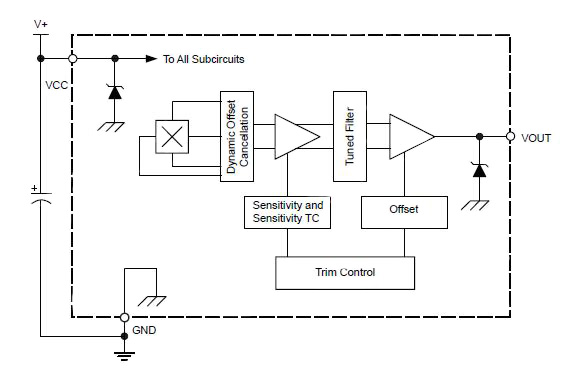 Figure 3: The Allegro A1324 family of Hall sensors is packaged in miniature SOT23W.

The Hall Effect can also be used to sense current running through a wire or conductor. This is where the technology is becoming increasing popular, with the current path and a Hall element, integrated into a single small package such as an 8 pin SOIC like the Allegro ACS712 devices.

Hall Effect devices have the primary advantage over other current sensing technologies, as the current sensing path is completely electrically isolated from the low voltage signal input/outputs. The use of flip-chip technology leads to an optimized magnetic coupling between the active face of the Hall element and the field generated by the current to be sensed. This packaging technique eliminates the need for a flux concentrator. The internal resistance of the copper path used for current sensing is typically 1.5 mΩ for low power loss.

The Honeywell HMC1051Z, HMC1051ZL, HMC1052L, and HMC1053 are magnetoresistive sensors designed for low field magnetic sensing in a range of applications from low-cost compasses to current sensing. Various packaging options have been created from the basic HMC1052 sensor chip to create 1, 2, and 3-axis magnetoresistive sensors for cost-effective and small-size solutions.

The sensors use Wheatstone bridge devices to measure magnetic fields. With a power supply applied to a bridge, the sensor converts any incident magnetic field in the sensitive axis direction to a differential voltage output. In addition to the bridge circuit, the sensor has two on-chip magnetically coupled straps: the offset strap and the set/reset strap, built from spirals of metallization. These straps are Honeywell-patented features for incident field adjustment and magnetic domain alignment. They eliminate the need for external coils positioned around the sensors.

The magnetoresistive sensors are made of a nickel-iron (Permalloy) thin film, deposited on a silicon wafer and patterned as a resistive strip element. In the presence of a magnetic field, a change in the bridge resistive elements causes a corresponding change in voltage across the bridge outputs.

These resistive elements are aligned together to have a common sensitive axis (indicated by arrows on the pinouts) that will provide positive voltage change with magnetic fields increasing in the sensitive direction. Because the output only is in proportion to the one-dimensional axis (the principle of anisotropy) and its magnitude, additional sensor bridges placed at orthogonal directions permit accurate measurement of arbitrary field direction. The combination of sensor bridges in two and three orthogonal axes mean the devices can be used in applications such as compassing and magnetometry.

The offset strap allows for several modes of operation when a direct current is driven through it. These modes are: 1) Subtraction (bucking) of an unwanted external magnetic field, 2) nulling of the bridge offset voltage, 3) Closed loop field cancellation, and 4) Auto-calibration of bridge gain.

The set/reset strap can be pulsed with high currents to enable the sensor to perform high sensitivity measurements, flip the polarity of the bridge output voltage, and used to improve linearity, lower cross-axis effects, and temperature effects.

Hall sensors provide a contactless solution for determining an appliance’s knob position. Several techniques are available for determining knob location. For example, if the application requires limited, discrete knob positions then simple switches can be used. Each switch in the application represents a distinct position mark around the knob, and when a magnet, attached to the turning knob, rests above one of the stationary switches, simple electronic logic can decipher which level has been selected.

The different output voltage responses from switch and linear implementations of knob position are shown in Figure 4. 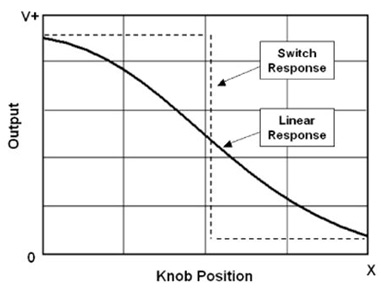 
As process technology develops so it has been possible to integrate more functions alongside the sensor. The AS5510 from ams is a linear Hall sensor with 10-bit resolution and I²C interface. It can measure absolute position of lateral movement of a simple two-pole magnet for applications such as position sensing, servo drive feedback, camera lens control and closed-loop position control.

Depending on the magnet size, a lateral stroke of 0.5 mm to 2 mm can be measured with air gaps around 1.0 mm. To conserve power, the AS5510 may be switched to a power down state when it is not used. It is available in a WLCSP package and qualified for an ambient temperature range from –30°C to +85°C. 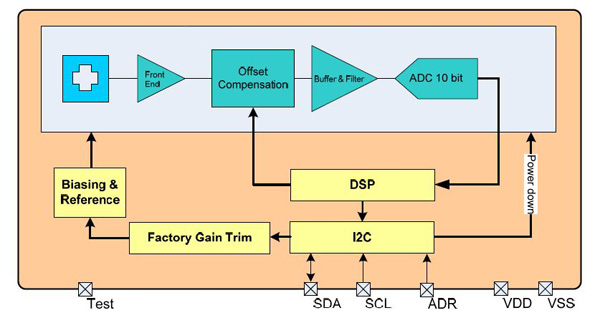 A linear Hall Effect sensor can also be used to monitor fluid levels, such as in washing machines or dishwashers. This can be done with multiple sensors and a magnet suspended in a float. As the float rises within a tube, it triggers discrete switches that are positioned outside of the tube housing, indicating the water level.

Hall Effect current sensor ICs are well established in motor control applications for both monitoring and protection. As the current of a motor is directly proportional to the torque, the current can be measured by the sensor. This can be fed back to a microprocessor to achieve the required current and therefore the required speed of the motor.

In this industrial application, temperature stability is vital as the temperature can vary significantly with the operation of the motor.

The AD22151 is a linear Hall Effect transducer where the output is a voltage proportional to a magnetic field applied perpendicularly to the package. By combining the Hall technology and instrumentation circuitry to minimize temperature related drifts associated with silicon Hall cell characteristics, the architecture of the AD22151 provides the advantages of a monolithic implementation, while allowing sufficient versatility to meet varied application requirements with a minimum number of components.

The device consists of epi Hall plate structures located at the center of the die. The Hall plates are orthogonally sampled by commutation switches via a differential amplifier. The two amplified Hall signals are synchronously demodulated to cancel out any offset drift from changes in temperature and the demodulated signal passes through a non-inverting amplifier to provide the final gain and drive capability. 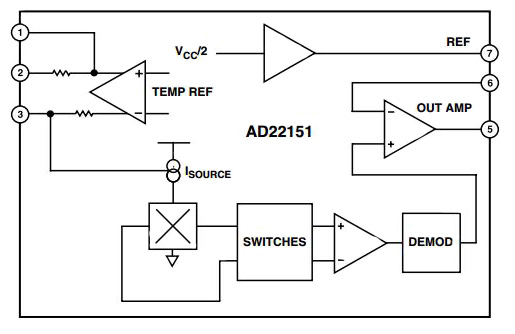 Figure 6: The AD22151 from Analog Devices provides a temperature reference to provide more thermal stability to the Hall Effect sensor.


Alongside the dynamic offset drift cancellation, there is a built-in temperature sensor. This can be used to compensate for a number of the magnetic materials commonly used in low-cost position sensor assemblies.

The relative value of sensitivity to magnetic field can be altered by the application of mechanical force upon silicon. The mechanism is principally the redistribution of electrons throughout the ‘valleys’ of the silicon crystal. Mechanical force on the sensor is attributable to package-induced stress. The package material acts to distort the encapsulated silicon, altering the Hall cell gain by ±2% and GTCU by ±200 ppm.

Hall Effect devices are becoming increasingly popular for a wide range of applications. As the temperature stability improves, they can be used in more motor control designs and as the process technology improves and costs come down, they can be used in more consumer applications to replace mechanical switches with more flexible, cost effective sensing and switch designs. At the same time, the improving process technology allows more features to be integrated such as amplifiers, analog-to-digital converters, and serial interfaces to make it simpler to attach the sensor to a microcontroller. The current sensing and magnetometer capabilities also open up new applications for compass and directional designs.