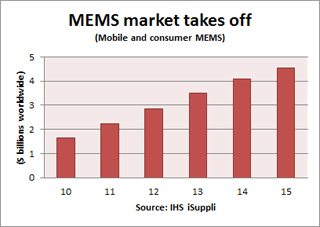 Revenue for consumer mobile MEMS will continue to grow through 2015 when the market reaches $4.54 billion, reported IHS iSuppli. Smart phones and media tablets will drive much of the MEMS growth.

MEMS include accelerometers and gyroscopes that provide intuitive motion-based displays, microphones for cell phones, and acoustical wave filters that facilitate wireless Internet access, among other devices.

“MEMS devices provide many of the basic functions that make tablets and smartphones such compelling products,” said Jérémie Bouchard, director and principal analyst for MEMS and sensors at IHS. He said MEMS content in tablets and smart phones is increasing, driving the expansion of the entire consumer and mobile MEMS market.

One MEMS device that will post strong growth is 3-axis gyroscope. It is used with an accelerometer and a digital compass to allow for faster, smoother, and more accurate motion sensing for applications such as gaming and augmented reality. Revenue in 2011 for 3-axis gyroscopes will rise to $420 million, up from $127 million last year. The 3-axis gyroscope is in smartphones such as the iPhone 4 from Apple and the Galaxy S II from Samsung Electronics. It is also in most media tablet devices as well as in game consoles.

Mobile handsets, including smart phones, will be the largest application for MEMS this year. MEMS revenue for handsets will reach $1.21 billion, approximately 50 percent of the total consumer and mobile MEMS space, according to IHS iSuppli.

The second biggest application for MEMS in 2011 will be gaming with $221.5 million in revenue, followed by media tablets with $158.6 million.

MEMS revenue from tablets, in particular, will show the fastest growth, up 331 percent from $36.83 million in 2010, and is set to overtake gaming next year to clinch second place, IHS iSuppli reported.