A look at LED packaging styles for optimal performance and cost reduction including products from Cree and Osram.


Packaging is estimated to account for about 40 to 60 percent of an LED lighting unit’s system cost, which makes it the biggest opportunity for cost reductions, according to the market research firm Yole Developpement. This has led to the creation of several different package styles, aimed at different applications as well as meeting performance and cost requirements. These packages include single- and multi-chip packages, mid-power plastic leaded chip carriers (PLCCs), ceramic-based packaging, arrays, and chip-on-board.

On the other hand, Yole also reports that packaging can be a double-edged sword, with the growing number of package styles limiting cost reduction in LED manufacturing by increasing the number of SKUs, which prevents standardization and related economies of scale.

In this article, we will take a look at several LED packaging styles and explain where they can be best used for optimal performance and cost advantage. Examples include several of Cree's products, such as the XH-G, XM-L2, CXA1304, CXA1816 and CXA1520, as well as OSRAM's Oslon family of LEDs.

Let us first discuss what is happening with discrete, mid-power LEDs. In most cases, mid-power LEDs are packaged in plastic packages, called PLCCs, which are generally mounted on a metal leadframe with a molded plastic carrier. These are the typical rectangle-sized packages with a yellow dome. The disadvantages of these packages are that they are susceptible to degradation due to a lot of light and heat being emitted, according to Paul Scheidt, product marketing manager, Cree Inc. (Durham, NC). "As we develop better technologies, we are starting to get more light out of these LEDs, so packaging companies are running up against the limitation of the plastic itself," explained Scheidt.

As the LEDs run brighter and at a higher temperature, the plastic is much more susceptible to degradation both in terms of losing light output and shifting color, he added.

To solve this problem, Cree developed a line of midpower ceramic-packaged LEDs, targeting linear-type lighting such as fluorescent replacement products including tubes, troffers, and cove lights, where the light is spread out very uniformly, but is still fairly bright. Since the ceramic substrate is better at handling higher temperatures, it is said to deliver a better long-term reliability in terms of both maintaining light output, as well as not shifting color.

Earlier this year, Cree introduced the XLamp XH Series LEDs, presented as the first family of mid-power ceramic LEDs, that are expected to enable more energy-efficient, longer-life LED lighting solutions. These LEDs are optimized for fluorescent replacement lighting applications such as troffers and panel lights that require high efficacy, long lifetime, and a uniform appearance.

The ceramic-based XH LEDs are designed to deliver long L70 lifetimes at the high-temperature and high-current operation of Cree's other high-power LEDs, including the XP and XT LEDs. Both XH-G and XH-B LEDs are housed in a 3.0 x 3.0 mm footprint package with a 13 percent wider beam angle than most plastic mid-power LEDs.

While designers will have to pay a little more for the ceramic packaging, it will increase the reliability of their parts and products, so it is important to consider the total cost of ownership, not just the price of piece parts. "Most people are looking at how to get the lowest component cost without really understanding what kinds of risks are associated with those types of parts," said Scheidt.

"We are getting to a point where the color shift is not a subtle thing and is fairly obvious, so it will be a concern going forward, especially for companies that have reputations and brands to maintain," he added.

Another example of a performance and cost improvement for discrete LEDs is Cree's XM-L2 LED, which delivers up to 186 lumens/W at 350 mA, 25°C. The family is based on the company's SC³ Technology, which helps deliver double the lumens-per-dollar and 20 percent more lumens-per-watt over the original XM-L LED. The upshot is that lighting manufacturers can use fewer LEDs to deliver a better lighting system for less cost. These LEDs target very-high lumen applications such as indoor, high-bay, and outdoor lighting.

Developments are also occurring in the array segment. Cree's CXA integrated array, or chip-on-board (COB) array, delivers both a ceramic package and integration. This allows for multiple die under one flat, uniform phosphor disc or dome. This also means it can be directly attached to a heatsink.

These devices eliminate the need for lighting manufacturers to place plastic mid-power LEDs on a printed circuit board (PCB) or have someone put it on a board for them, which also introduce several other issues such as worrying about color bins, mixing the bins together, or inventorying the right boards, according to Scheidt.

"It is not just about comparing LED costs; a PCB can be $5, $10, or $15 worth of costs that can be removed from the system just by using a different kind of component," he added.

Another benefit is that integrated arrays are very well-suited for manual assembly. "Lighting companies do not have the time and resources to become an electronics company. They do not want the hassle of dealing with another supplier to manage boards. They can epoxy down the integrated arrays or use a connector or holder to hold them directly on the heatsink without requiring a lot of engineering resources to do that," explained Scheidt.

He added that integrated arrays work very well for semi-directional lighting, including downlights. Cree's XLamp CXA1304 LED array, which is the most compact part in the family, delivers up to 1,034 lumens in a 6 mm optical source size for small form-factor lighting applications. The XLamp CXA1816 LED array can enable LED replacements for up to 70 W ceramic metal halide in spotlighting, or for 2,000 lumen downlights with a 12 mm optical source size.

Most recently, Cree introduced its first high-density (HD) LED array family (Figure 1) that doubles the system intensity of spotlights compared to previous arrays. The HD CXA arrays are said to deliver a significant reduction in system cost and power consumption. The first HD array, the CXA1520 LED, delivers the same intensity and light quality as 39 W ceramic metal halide (CMH) at up to 50 percent lower power. This means it delivers a lot of light from a very small source. 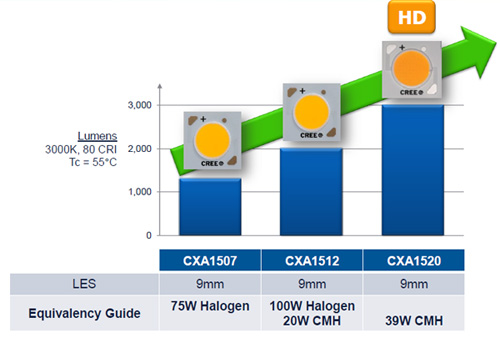 Figure 1: Cree's first high-density (HD) LED arrays double the system intensity of spotlights compared to previous arrays. They are said to deliver the same intensity and light quality of a 39 W ceramic metal halide at up to 50 percent lower power (Courtesy of Cree).

OSRAM Opto Semiconductor also has tackled the cost issue by developing a new solder pad design concept for its Oslon LEDs (Figure 2). This uniform solder pad allows two different LED types to be placed on a single board, which is said to reduce the cost of storage and process changes. 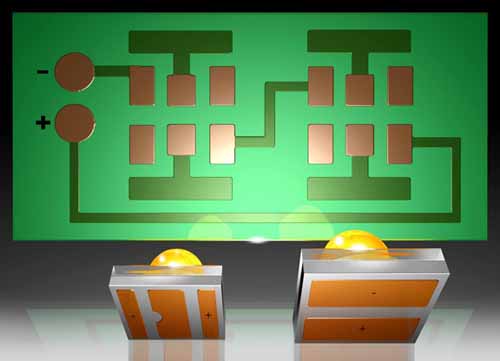 Figure 2: OSRAM's adapted solder pad design enables two different LED types to be placed on one board (Courtesy of OSRAM).

OSRAM's concept for ceramic LED components, such as the Oslon family, enables the board solder pad to handle LED components from at least two different manufacturers. This also gives lighting designers the flexibility to use a second source for high-power LED components, eliminating the need to deal with performance and process challenges. It also can be used for metal core, FR4, and ceramic boards.

Before selecting LED components, whether they are housed in discrete or array packages, lighting designers need to pay attention to more than just the cost of the LED. They should also consider the total cost of ownership, as well as the performance risks and benefits of the different packaging types available for mid- and high-power LEDs for their specific applications.