However, small price increases are possible if costs of raw materials rise.

Buyers can expect stable connector prices through the first quarter of 2012, providing prices of raw materials such as gold and copper remain flat.

Several connector manufacturers increased prices in 2011 due to rising costs for gold, copper and plastics, as well as labor costs in Asia. For example, FCI implemented low single-digit increases for some product lines.

"Price hikes weren't across the board," said Mark Parisi, vice president of sales for Americas, at FCI USA, Etters, Pa. "We try to minimize as much as possible, but when you look at the history of gold and copper pricing, as well as oil pricing, related to the manufacture of plastics or transportation, it's hard to ignore.”

Hirose also increased prices less than 5 percent several months ago. The connector maker expects prices to remain stable through the first of next year.

If connector prices do rise in the first quarter of the 2012, they should only increase 1-2 percent, according to Wes Morgan, ITT's director, Americas Product Management, Santa Ana, Calif.

FCI has incorporated lean principles into all of its manufacturing sites, which will likely be completed this year. Some of those manufacturing changes will offset increases in the cost of raw materials, according to Tom Scannell, director of distribution sales for Americas, FCI USA.

Despite slower growth in these sectors, the global connector industry is forecast to grow about 8.5 percent this year to $49.2 billion, Bishop said. Last year, the connector market grew 28 percent.

As a result, products in the highest demand include PCB connectors, harsh environment connectors, and high-speed backplane connectors.

With weaker demand compared to last year, most leadtimes are stable in the 4-8 week range, although some suppliers report leadtimes are longer for some products.

“If price increases are necessary, they will only be marginal, maybe a percentage or two,” said Wes Morgan, ITT's director, Americas Product Management.Connector leadtimes had stretched following the Japanese earthquake and tsunami in March, but most have returned to normal. "We did see some products go on allocation but they came back by the first week in June," said Scannell of FCI.

About 5 percent of Hirose's product lines, primarily board-to-board connectors sold through distribution, was impacted by the Japan disaster. Hirose reports that all those lines were up and running as of September. Lead times have returned to normal deliveries, averaging 6-8 weeks.

"As you can imagine, we had a backlog of orders from existing customers, but we had inventory in place with our channel partners," said Rick van Weezel, vice president of sales and marketing, Hirose Electric USA, Inc., Simi Valley, Calif.

"One of the key things our channel partners were able to accomplish was to protect that inventory for existing customers,” Weezel said. “Most of our distributors did a good job of making sure that whatever inventories they had were destined for good customers and not brokers who were being opportunistic."

Although not related to the Japan disaster, many connector suppliers are implementing strategies aimed at leadtime reduction. For instance, ITT has become more vertically integrated, moving more of its component manufacturing to where the assembly is being done. ITT's goal is to reduce lead times by about 30 percent in the first half of 2012. The changes also are expected to help reduce costs. 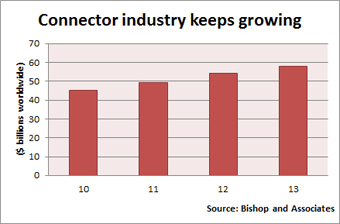 Despite weaker demand the connector market will grow 8.5 percent this year and continue to grow through 2013.Expanded second sourcing agreements also will ensure that buyers have enough supply of the latest high-speed connectors. For instance, Molex Inc. reports that Tyco will be second sourcing all of its Z-based 25 Gbits/s connector products. Molex's z-Quad Small Form-factor Pluggable Plus (zQSFP+) product family is targeted at high-density telecommunications, data networking, test and measurement, and medical diagnostic equipment.

FCI plans to expand its partnership with Amphenol on high-speed, 25 Gbits/s and higher backplane products, starting at the end of the fourth quarter and the beginning of the first quarter of 2012. FCI is a licensed second source to Amphenol, which allows the company to manufacture and sell all XCede backplane connector products, designed for 25 Gbits/s performance.