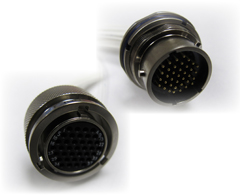 They also face rising raw materials costs and environmental compliance issues. In some cases, the challenge of creating smaller and lighter products is intertwined with rising materials costs.

"The price of oil is hurting every industry, so lighter and smaller components are better," said Marco Lee, product manager for circular connectors, for TE Connectivity DEUTSCH, based in San Diego, Calif.

"Gold drives a lot of the cost of a circular connector, especially for high pin-count connectors," noted Wes Morgan, director, Americas product management, at ITT Interconnect Solutions in Santa Ana, Calif. In addition, there is the cost of the steel and aluminum used on the connector itself, copper used in the contacts, and plastics used in the insulators, according to Morgan. 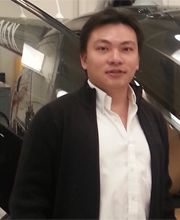 "Over the last 12 months, gold pricing has fluctuated like crazy; you can't predict the price. The price of composite plastics and rubber also increased in the last 12 months, driven by the price of oil," said Marco Lee, product manager for circular connectors, TE Connectivity DEUTSCH.While ITT has reduced cost by eliminating or reducing gold content, Morgan said there are several industry specs that do not allow for the elimination of gold plating. "We're being held to use gold for the spec, but from a performance standpoint, we have alternatives." Some of those alternatives include alloys of silver or nickel.

Lee said ITT's forecast indicates that the price of gold and copper will remain flat in 2013, which means connector pricing should stay mostly flat, as well.

Morgan agreed that there has been a trend toward price stabilization for materials, but it all depends on demand. "If worldwide demand picks up significantly, we could see further increases in materials," he said. "Currently, it looks like we will see stable instead of rising commodity prices."

Prices for circular connectors also have been fairly stable this year, according to Morgan. However, he expects some moderate price increases of less than 5 percent in 2013, driven by the cost of labor and environmental compliance.

Leadtimes should remain stable. Circular connector manufacturers said there have been no major supply issues over the past 12 months and they don't foresee any issues ahead.

Military circular connector leadtimes are averaging 10 to 16 weeks, but most connector manufacturers work with their distributors to ensure that there is buffer stock on the shelf for faster deliveries.

Although build-to-print leadtimes range between 10 to 12 weeks, leadtimes are four to six weeks for standard, high-volume product, Morgan noted. "Distributors can deliver in less than two weeks," he added.

While buyers can expect short leadtimes for connectors, they can also expect to see more lightweight, higher-density devices. 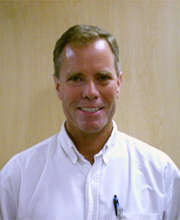 "If worldwide demand picks up significantly, we could see further increases in materials. Currently, it looks like we'll see stable instead of rising commodity prices," said Wes Morgan, ITT Interconnect Solutions, director, Americas product management.As space and weight savings become a bigger concern in harsh environment applications, connector makers are developing mil-spec connectors that are lightweight, smaller, and higher density. In many cases, connector manufactures can deliver higher power in the same footprint or the same power in a smaller size.

"It's very easy to push power through a large contact and a big connector. You have plenty of room for big contacts and for insulation," said Morgan. “However, when connectors are miniaturized, the amperage that flows through the contact is reduced so new types of contacts need to be designed to maximize the amperage,” he added.

ITT has also developed small, lightweight circular connectors for off-road vehicles and tractors. They are sealed to IP67/IP69K and also can be used in military and industrial applications that require a small, lightweight, harsh-environment solution.

TE Connectivity DEUTSCH also has focused a lot of its new product development around smaller and lighter connector designs. For example, the company now offers a lightweight version of the military MIL-DTL-38999 Series III metal connectors by using a composite material. The DEUTSCH ACT series offers the same footprint and performance as the metal version, but is up to 40 percent lighter, depending on the connector.

"In the high-reliability space, there has been a trend towards increasing the bandwidth of circular connectors," said Morgan. "For years, ITT has had its quadrax contact system, which handles up to 1-Gigbit data speeds."

Morgan added that ITT's customers have started to use multiple quadrax contacts for use in higher bandwidth applications. "In response, the company is developing a new contact offering for Gigabit Ethernet. We're in the process of developing a product for next-generation multi-gig applications with a targeted launch in early 2013." 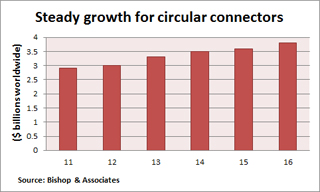 The circular connector market will post slow, but steady growth through 2016 when revenue reaches $3.8 billion.Also addressing the need for small size and high bandwidth data requirements, ITT also developed a new, pogo-style breakaway series for high-reliability military and medical applications. The Nemesis Series Space Saver connectors are smaller, lighter, and higher density, but do not carry the same amperage rating as the MKJ product, and it is not field terminated, according Morgan. It is used in military on-body night vision equipment and handheld radios.

Another challenge for connector makers is developing new plating solutions that are environmentally friendly.

The circular connector industry typically uses cadmium as plating for the aluminum connector shell to protect the connector from harsh environments. However, cadmium is one of the materials banned under the European Union's RoHS directive.

Although exemptions still apply to some applications, including military, medical and telecommunications, some of them will be phased out over the next few years.