This article discusses efficient and effective techniques for connecting large numbers of sensors and actuators to a host system that may range from a few meters distance to hundreds of miles away.


Growing demand for sophisticated monitoring and automation, from the home to the high seas, calls for efficient and effective techniques for connecting large numbers of sensors and actuators to a host system that may range from a few meters to hundreds of miles away.

Growing role for sense and control

Industrial controls have traditionally relied heavily on sensors to detect things like position, temperature or pressure for controlling various processes such as chemical production, and filling of containers or mechanical assembly tasks. As industrial companies seek to reduce human intervention to improve quality and reduce headcount for lower costs, there is increased demand for sensors.

Adding further to the demand for sensors, large numbers are being deployed in applications and locations where typically they have not been used. The smart-building phenomenon is one example; it is becoming more common for offices, factories, and even private homes to incorporate networks of sensors that detect human presence, ambient light, room temperatures, and air quality. This enables controllers to optimize lighting, HVAC, and other settings for comfort and energy efficiency.

Moreover, the ability to connect across the Internet, or wirelessly, to sensors located almost anywhere in the world, even on the move, is allowing many types of businesses to improve safety, security, and quality of service. Logistics companies are able to detect unauthorized opening of containers in transit by monitoring door or temperature sensors from a central operations hub. The ability to monitor temperature-controlled containers centrally also allows operators to identify problems occurring in the field, such as failure of a truck’s refrigerator unit, and direct the driver to a repair station closest to the planned delivery route. In the past, a refrigerator failure may result in the unavoidable loss of perishable stocks and missed deliveries. Remote sensing is now helping logistics companies avoid these costs.

With growing reliance on increasing numbers of networked sensors, there is a need for more efficient and practicable techniques for connecting sensors to the host system. Increasingly, traditional sensor connections such as analog (4-20 mA), or serial-digital connections such as RS-232/485, present difficult wiring challenges that not only hamper installation, but also slow down and complicate maintenance and repair. IO Link provides a standardized I/O technology that addresses wiring challenges in the ‘final meters’ of a sensor network, as shown in Figure 1. 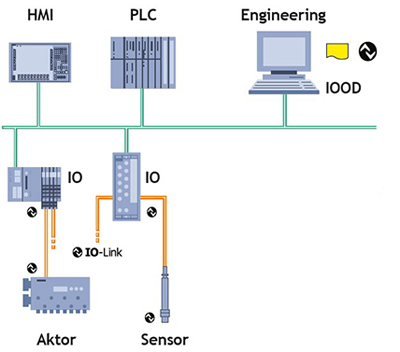 Figure 1: IO Link simplifies sensor interconnections in a number of ways, including allowing the use of standard cables.

IO Link is standardized as IEC 61131-9, and allows for point-to-point connections between sensor/actuator devices and a master connected to a network such as Ethernet or Profibus. A master may have multiple ports, each providing a connection for one IO Link device. IO Link provides for smart interactions between the master and the device, allowing user-controllable frame lengths from 2 to 32 bytes and a range of data rates. Device parameters are stored on the master, simplifying replacement of a failed device with an identical unit. In addition, the device contains an IO Device Description (IODD) file with manufacturer and functionality information, as well as an internal device ID, which comprehensively identifies the device to the master. IO Link specifies a 3-wire connection to the device based on long-established technology, which enables standardization of cable assemblies and interfaces for connecting various types of sensors and masters from different manufacturers.

An IO Link sensor or actuator may contain an IC such as the Maxim MAX14821 IO-Link Device Transceiver. This device acts as the physical layer interface, operating in conjunction with a microcontroller running the data-link layer protocol, as shown in Figure 2. Similarly, the MAX14824 IO Link Master Transceiver provides a physical link layer for use in master controllers. In-band SPI addressing, and selectable SPI addresses, enable this device to be used for connecting up to sixteen devices. Its 12 MHz SPI interface ensures low latency in such high port-count applications.

Figure 2: The MAX14821 IO Link Device Transceiver connects the sensor to the IO Link master via the C/Q pin.

With the inclusion of a microcontroller, sensors and transducers can become smart devices, implementing functionality such as calibration, signal processing, and more sophisticated capabilities that offload decision making from the central controller. Figure 3 illustrates the main sensing, signal conditioning, microcontroller, and network-interface functions of a temperature sensor using a thermocouple or Resistance Temperature Detector (RTD). 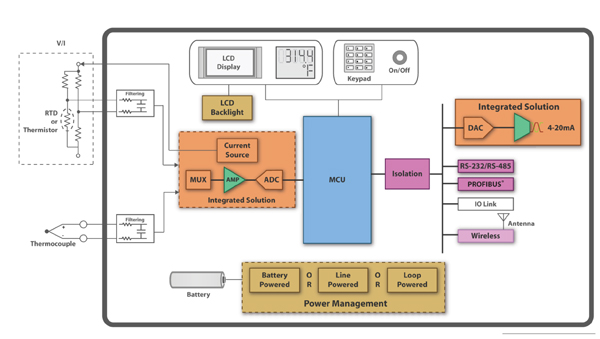 A key challenge when designing sensors, particularly for industrial applications, lies in capturing and conditioning the very-small-amplitude signals produced by the sensing element. In particular, industrial applications tend to be subject to high levels of electrical noise and surge voltages that require precision analog circuitry to convert the raw sensor output to a digital signal that can be accepted by the microcontroller or a digital-signal processor. Texas Instruments has a number of analog front-end ICs for various sensing applications, including temperature sensing, which provide a single-chip solution to this challenge.

The ADS1248 24-bit 2 ksample/s Analog-to-Digital Converter (ADC), as seen in Figure 3, is optimized for use in temperature sensors and integrates a low-noise Programmable Gain Amplifier (PGA), a precision ADC with digital filter, and a low-drift voltage reference. A precision-current source is also integrated, which can be used to supply a thermistor or other RTD-type temperature sensor. The microcontroller shown in the diagram can be used to handle the network interface and host communications, as well as other functions such as a local display.

Similarly, TI offers the PGA309 voltage-output programmable sensor conditioner, which is optimized for use with bridge-excitation type sensors such as piezo-resistive or ceramic-film pressure sensors. It can be used as shown in Figure 3, and features built-in circuitry to compensate for sensor linearization errors, span, offset and temperature drift, and calibration. It is also able to detect if the sensor develops a fault. TI also has a variety of discrete, precision ADCs such as the ADS1274, which is capable of sampling up to 144 ksample/s, allowing use with sensors such as flow meters.

There are some barriers to the rapid development of smart sensors, and the growth of the smart-sensor market. These include various incompatibilities between sensing materials or techniques and microelectronic circuitry, which can prevent close integration or co-packaging of the sensor and smart circuitry. Perhaps more important is the fact that sensor producers may not want to build multiple variants for connecting to numerous network standards such as Ethernet, Profibus, or others. Indeed, the sensor builders may not want to engage with network-connectivity aspects at all.

The IEEE 1451 standards were developed to address these types of issues, proposing standardized interfaces between the sensing and network-connectivity functions of a smart sensor. Figure 4 illustrates how the IEEE 1451 initiative models and sensor partitions allow such standardization.

Partitioning the sensor as shown effectively enables a compliant-sensor module from any manufacturer to plug into a compliant network-interface module from any other manufacturer. The network-interface module may support Ethernet, Profibus, or another type of connectivity. In addition, the IEEE 1451 framework proposes a standard Transducer Electronic Data Sheet (TEDS), to be contained within the transducer module, which describes the transducer to the host network. The resulting unit comprising the smart-sensor and network-interface modules is capable of connecting directly to the network as a plug-and-play unit. This can reduce human error when connecting sensors to the network, simplify installation and maintenance of smart-sensor networks, and allow sensors to be replaced or upgraded quickly and easily with minimal downtime.

Various aspects and principles of IEEE 1451, particularly the TEDS and STIM standard, have been employed in commercial sensor products to facilitate smart interfaces and network connectivity. IEEE 1451 also provides the basis for the Java Distributed Data Acquisition and Control (JDDAC) platform, which enables Java applications to connect to a wide variety of sensors and actuators.

With a suitable network interface, smart sensors are able to communicate using a diverse range of standards. These may be application-specific standards, such as Controller Area Network (CAN), Highway Addressable Remote Transducer Protocol (HART), Profibus, or an Industrial Ethernet derivative such as EtherCAT. Equally, general-purpose connectivity such as standard Ethernet or Internet Protocol (IP) may be supported. With IP support and an embedded web server, the smart sensor can be connected to the Internet, which provides the opportunity to monitor the device from almost anywhere in the world.

Connecting wirelessly to smart sensors is also desirable for a number of reasons. Within a single industrial site, wireless networking using a standard such as ZigBee® permits easy scaling or adaptation of the network without requiring extensive new infrastructure. This may be implemented using an IEEE 802.15.4 radio transceiver, or a smart or wireless microcontroller such as the STM32W family from STMicroelectronics, which contains a 32-bit ARM® Cortex™-M3 microcontroller and integrated IEEE 802.15.4 radio.

With the rapid growth of the Internet of Things (IOT) and other applications such as telematics requiring Machine-to-Machine (M2M) connectivity over cellular networks, a variety of embedded modems are available to support cellular standards such as GSM, GPRS/EDGE and CDMA, permitting connection to networks used in various territories worldwide. An embedded modem such as the Multi-Tech MTSMC-C1-N16-SP (see Figure 5), is a dual-band 800/1900 MHz CDMA2000 modem that also supports Ethernet and Wi-Fi® access and is pre-certified to applicable network standards. It utilizes the standard embedded-modem pin-out established by Multi-Tech, and can be interfaced directly to a UART or microcontroller via a serial connection.

Figure 5. Embedded cellular modems such as the SocketModem® family from Multi-Tech Systems can be connected directly to a microcontroller.

Reliance on smart sensors to help manage resources and enhance productivity is set to continue growing. Careful attention to analog design is necessary for accurate sensing. Single-chip AFEs are available, which overcome these challenges when working with specific sensor types. As more sensors are deployed, and new sensing scenarios emerge, efficient and error-resistant methods are needed for connecting sensors to networks and central controllers, while allowing monitoring by human supervisors.

Careful consideration of the interfaces between smart-sensor and network-interface functions, taking advantage of sensor-specific standards, and the wide variety of networking and communication standards, allow many types of systems to be monitored and controlled accurately within a local area, or across distances of hundreds or even thousands of miles.