Components from Panasonic and Texas Instruments allow toy suppliers to inexpensively implement technologies such as Bluetooth, Wi-Fi, and cellular subsystems into various toys.


Today, it is not uncommon to see an Android or iOS cell phone or tablet being used to link to and control a toy; and the variety of toys that now include a wireless connection employing Bluetooth or Wi-Fi is exploding. On the store shelves you can find a variety of robots, flying drones, and many games that all incorporate wireless interfaces. These toys can now cost-effectively incorporate a wireless interface, multi-axis sensor, a small-area display, touch-control, and still other features thanks to the drastically reduced cost of implementing these components.

The component costs have tumbled as a result of the high-volume production of such devices for use in cell phones and tablets that incorporate both Wi-Fi and Bluetooth transceivers, as well as motion sensors, gyroscopes, GPS receivers, and touchscreens as part of their base-level specifications. Not only has the cost of wireless connections decreased, but also the cost of multi-axis sensors, microcontrollers, and many of the other components that are also finding their way into the latest generation of connected toys. Additionally, since most toys tend to be battery operated, low power consumption is also a key requirement for all these components, and that has spurred the adoption of the Bluetooth Low Energy standard (BLE) and its new cousin, dubbed Bluetooth Smart.

So what is Bluetooth Smart? Basically it is the same as Bluetooth LE, but it uses the Generic Attribute Profile (GATT), which is built on top of the Attribute Protocol (ATT). The GATT profile establishes common operations and a framework for the data transported and stored by the ATT. The GATT defines both a Server and Client role for the Bluetooth LE hardware. The GATT and ATT profiles are mandatory to implement in LE since GATT is used for discovering services. The use of GATT makes it easy for the software developer to simplify the discovery and linking process between the phone or tablet and the toy.

In the jargon of the Bluetooth Developer documents, the GATT Profile specifies the structure in which profile data is exchanged. This structure defines basic elements such as services and characteristics used in a profile. The top level of the hierarchy is a profile. A profile is composed of one or more services necessary to fulfill a use case. A service is composed of characteristics or references to other services. Each characteristic contains a value and may contain optional information about the value. The service and characteristic and the components of the characteristic (i.e. value and descriptors) contain the profile data and are all stored in attributes on the server.¹

The Bluetooth Low Energy standard is designed to reduce power consumption by establishing very fast connections (a few milliseconds) and transferring small amounts of data. Using these techniques, energy consumption is reduced to a tenth of Classic Bluetooth. BLE devices can be put into a sleep mode and activated for event activities. Furthermore, the maximum power consumption is less than 15 mA and the average power consumption is about 1 µA. Thus, a small coin cell, such as a CR2032, can power a device for up to 10 years of operation.

Designers seeking to add single-mode BLE or Bluetooth Smart to small, portable, power-conscious devices might consider the BL600 Series modules from Laird Technologies. Based on the Nordic Semiconductor nRF51822 chipset, BL600 modules provide low power consumption and good range within a compact footprint of 19 x 12.5 mm. The modules incorporate all the hardware and firmware required to support development of BLE applications. BL600 modules also are fully qualified as Bluetooth End Products, enabling designers to integrate the modules in devices without the need for further Bluetooth Qualification.

A toy is just an embedded control system

The basic architecture of a connected toy is very similar to that of an embedded control system — there is often a central control processor with local memory and power management capabilities, various signal inputs that connect to multiaxis sensors or switches, additional output signals that control one or more motors, a display or indicator lamp, or some other functions, and the wireless interface to the Wi-Fi and/or Bluetooth radios (Figure 1). Today, the control processor is often a highly integrated microcontroller based on an ARM® Cortex™-M0 or M3/M4 processor core, and the radio function is typically a separate chip or module that contains the transmit/receive circuits and power amplifier. 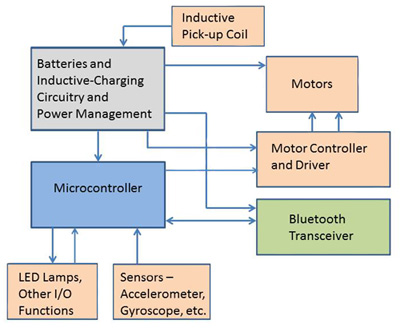 Figure 1: This simplified diagram of the electronic subsystem inside a connected toy such as the Sphero from Orbotix resembles a typical embedded control system. A microcontroller executes the program while the MCU’s I/O pins connect and control various sensors, motors, switches, displays, and wireless radios.

One of the more interesting connected toys to appear on the market is the Sphero robotic ball developed by Orbotix (Figure 2). Inside a translucent plastic ball about the size of a baseball, the company packed a complete system that includes a wireless charging system for the internal batteries, a Cortex-M4-based microcontroller from STMicroelectronics, a second ARM processor to run the Bluetooth stack, a motor driver from Texas Instruments to control the motor, a gyroscope sensor from Bosch, colored LEDs to allow users to change the Sphero’s color, and a Bluetooth Classic wireless interface from Amp’edRF. A second-generation version of the Sphero will reduce power consumption by replacing the Bluetooth Classic interface with a Bluetooth Smart solution. On a full charge the Sphero ball provides over an hour of full-throttle game play and can be controlled at distances of up to about 100 feet. 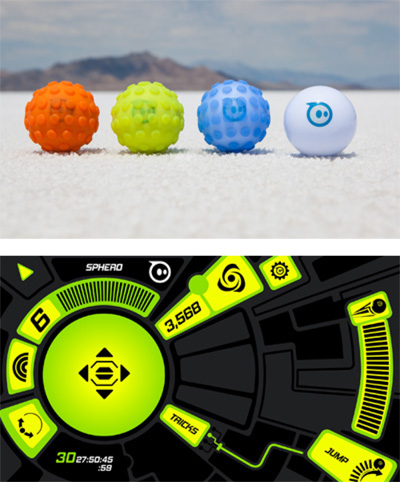 Robotic toys and flying drones from companies such as Wowwee and Parrot are good examples of how smartphone or tablet technology has been applied to provide novel functionality. For example, the Parrot “Jumping Sumo” two-wheeled robotic toy packs an embedded camera and can stream video over a Wi-Fi connection back to the smartphone or tablet (Figure 3, left). The Wi-Fi connection is also used for control, and users can have the robot roll around or jump; it can jump over 2.5 feet high, yet will always fall back on its wheels.

Parrot’s airborne drone, the AR.Drone2.0 is a four-propeller device that packs an HD camera that can capture 720p video at 30 frames/s and encode the video using a H.264 encoder (Figure 3, right). Although the integrated Wi-Fi interface allows the video to stream back to the smartphone or tablet, the system also has a USB slot for a flash memory stick that can store the video locally. The on-board computer/control system starts with a 1 GHz 32-bit ARM-based microcontroller and a Texas Instruments TMS320DM64x video DSP chip.

Figure 3: A jumping robotic toy, the Jumping Sumo, offered by Parrot can jump up to 2.5 feet in the air and packs an embedded camera that can stream video back to a smartphone or tablet over a Wi-Fi interface (left). An airborne drone, the AR.Drone2.0 Quadricopter, also from Parrot, provides extreme precision control and automatic stabilization to capture HD video while in flight. Multiple sensors provide stabilization, positioning, directional heading, and ground-speed data.

The Wi-Fi interface provides connectivity for a 802.11b/g/n, and multiple sensors including a three-axis gyroscope, accelerometer and magnetometer that help for GPS positioning, a pressure sensor, and ultrasound sensors for ground altitude measurements. A second low-resolution camera (QVGA) captures frames at 60 frames/s to help measure ground speed. Providing the lift for the drone are four brushless motors that can run at up to 28,500 RPM, and controlling each motor is an Atmel 8- MIPS AVR family CPU. Powering the drone is a 1000 mAH lithium-polymer rechargeable battery. A free software application available on the Apple App Store, AR.Free Flight, allows an iPhone, iPod Touch, or iPad to control the drone.

Engineers developing Wi-Fi connectivity for a design project should take a look at the Skyworks SE2594L, a complete 802.11a/b/g/n WLAN RF front-end module providing all the functionality of the power amplifiers, filtering, power detector, T/R switch, diplexers, and associated matching. Designed for ease of use, all RF ports are matched to 50 Ω to simplify PCB layout and the interface to the transceiver RFIC. The SE2594L also includes a transmitter power detector for each band and transmit chain with 20 dB of dynamic range for each transmit chain. The SE2594L provides a complete 2.4 and 5 GHz WLAN RF solution from the output of the transceiver to the antenna in a compact form-factor.

In summary, there is now an onslaught of wireless toys on the market, everything from tiny helicopters and multi-propeller drones, to robotic avatars that roam the office floor. The many devices leverage wireless technology to both control their movements and in some cases, send and receive video. This article looked at some of the technologies, Bluetooth, Wi-Fi, and even cellular subsystems, used by various toy suppliers to provide connectivity and control. As all the examples showed, connected toy concepts know no bounds and the limit is only the limit of the designer’s creativity.