From IT data centers to industrial floors, sensors are employed in every major industry today for critical monitoring and control applications.


From IT data centers to industrial floors, sensors are employed in every major industry today for critical monitoring and control applications. Despite integration, a typical sensing system solution requires several external components to complete the analog front-end (AFE) that takes the sensor’s output and feeds it to an analog-to-digital converter (ADC) or a microcontroller. Besides consuming more power and taking up more space on a board, such designs also take time to achieve optimum performance. In some cases, it could take several weeks of tweaking for optimal AFE operation, and the more components on board, the lower the system reliability.

To address the stringent AFE needs of sensor system designers, National Semiconductor has developed new configurable AFE chips that promise to swiftly simplify the design of analog signal path between the sensor’s output and the ADC or the controller. The LMP91000 is a fully configurable, low-power potentiostat provides a complete, integrated signal path solution between a gas sensor and an ADC, and is a multi-channel, low power, 24-bit sensor AFE with true continuous background calibration and diagnostics for high performance transmitter and transducer applications.

These sensor AFEs are also software-programmable via an I²C interface, allowing them to be optimized for the specific needs of a particular sensor application. For example, when using a thermocouple that offers a wide temperature range, the output voltage of the thermocouple varies greatly depending on the temperature being measured. The AFE’s gain can be adjusted dynamically to get the performance for the thermocouple output.

Designed for use in micro-power chemical and gas sensing applications, the LMP91000 measures current in a potentiostat that is proportional to gas concentration. As shown in Figure 1, it generates an output voltage proportional to the cell current using a transimpedance amplifier (TIA). The TIA gain is user programmable through an I²C compatible interface, allowing the LMP91000 to support toxic gas sensitivities over a range of 0.5 nA/ppm to 9.5 nA/ppm. Plus, the ultra-low power makes it optimal for battery-operated systems, as well as 4 mA to 20 mA transmitter applications. The cell voltage and cell output gain are user-selectable using on-board programmability. Together, they allow the user to support a wide range of gases and gas concentrations with a total current consumption for the device as low as 10 µA on average. 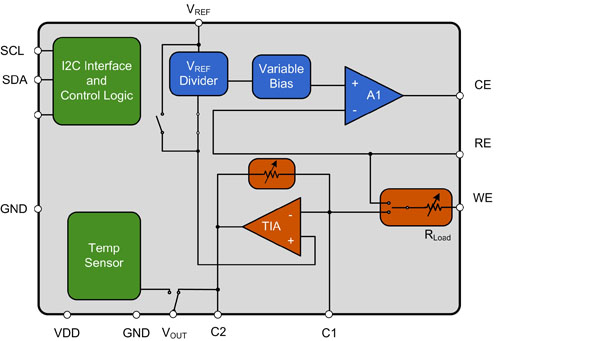 Hence, with a single integrated design, the LMP91000 can support multiple electrochemical sensors such as three-lead toxic gas sensors and two-lead galvanic cell sensors. The I²C interface allows the user to verify sensor performance and an embedded temperature sensor provides an additional output to monitor the temperature. The LMP91000 operates over a voltage range of 2.7 to 5.5 V.

As shown in Figure 2, a three-lead toxic gas sensor is connected to LMP91000. In this circuit, which was presented in an article written by National’s Chuck Sins for Sensors magazine1, the differential input amplifier of the AFE is used to compare the potential between the sensor’s working and reference electrodes (WE and RE) to a required working bias potential, set by the variable bias circuitry. According to Sins, the error signal is amplified and applied to the counter electrode (CE) of the sensor via the control amplifier A1. Any changes in the impedance between the WE and RE electrodes will cause a change in the voltage applied to the CE electrode, in order to maintain the constant voltage between WE and RE electrodes. The TIA amplifier connected to the WE electrode is used to provide an output voltage that is proportional to the cell current.

The TIA gain is programmable through the I²C interface, which is connected to a microcontroller. It accommodates the full-scale ranges of most existing sensors. The variable bias block circuitry (see Figure 2) provides the amount of bias voltage required by a biased gas sensor between its RE and WE electrodes. The bias voltage can be programmed to be 1 percent to 24 percent (14 steps in total) of the supply or the external reference voltage. Also, the 14 steps can be programmed, including polarity of the bias, through the I²C interface. If a different gain is required, and external resistor can be connected between pins C1 and C2. As a result, the AFE can handle full-scale range, going from 10 to 600 μA.

The design task is further simplified by the software and hardware development tools available for each of the sensor AFE chips. The software configuration can be transferred to the physical sensor using the AFE evaluation board shown in Figure 3. In this set-up, the configurations are transferred to the sensor AFE chip on the evaluation board via a USB-based data capture board called the SPIO-4. Real-world measurements can now be compared to the estimated performance of the AFE chip LMP91000.

Figure 3: A hardware/software development system for the sensor AFE LMP91000 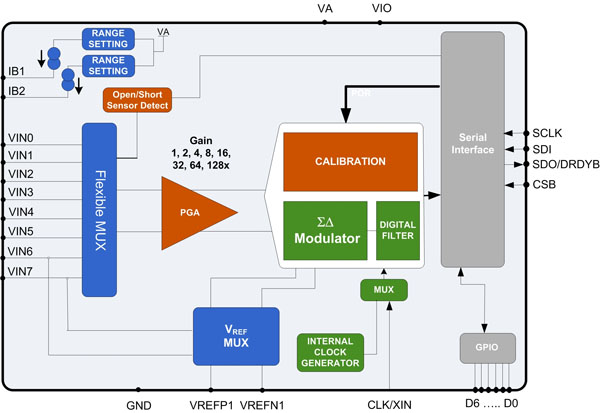 Collectively, these features make the LMP90100 a complete analog front-end for low power, precision sensor applications such as temperature, pressure, strain gauge, and industrial process control. Housed in a 28-pin TSSOP package, LMP90100 guarantees specs over the extended temperature range of -40° to +105°C.

Because the LMP90100 offers flexible input multiplexer (mux) with the ability to sample each signal path independent of the other, the sensor AFE lends itself to applications where multiple sensors must be monitored at the same time, such as monitoring pressure over a wide operating temperature range. Therefore, unlike custom or discrete design where each sensor would require a separate signal path, the LMP90100 can accept analog inputs from multiple sensors as shown in Figure 5. Here, each sensor also provides a different output signal. For instance, the pressure sensor may offer a full-scale output range of 20 mV while the temperature sensor may have a range of several volts. The LMP90100 can address these requirements with its programmable gain options of 1x to 128x in steps of 2x or 6 dB. 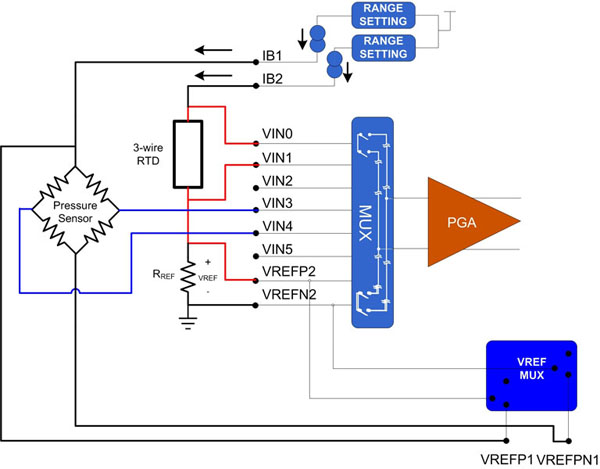 In this scheme, also discussed in the aforementioned Sans article1, the on-chip current sources are used to bias the sensors while reference mux permits two different voltage references for the 24-bit ADC. The reference mux also allows for ratiometric measurements where the ADC reference is relative to the bias of the sensor, thus, providing superior system performance in noisy environments.

Since the measurements are being made over a wide operating temperature range, traditional signal path systems must be characterized over the entire temperature range. Also, the LMP90100's true background calibration is put to use here as the signal path from the output of the sensor to the input of the microcontroller is self-calibrated and does not drift over temperature or time. This feature removes the need to monitor or correct the gain and offset of the electronics in the system signal path without impacting system performance.