PC demand was weakest in mature markets and a little stronger in Asia-Pacific.

Total global PC shipments dropped from 83.2 million in the first quarter of 2010 to 80.5 million during the first three months of 2011.

The decline was due to weak purchases by businesses and consumers. An increase in fuel and commodity prices, and the earthquake in Japan which disrupted some electronics production, contributed to weaker PC demand, reported IDC. 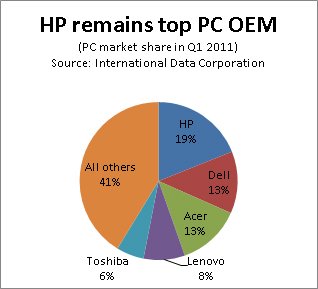 In mature markets, there were apparently no compelling reasons to buy secondary PCs, and buyers in those areas are focused on many "necessary replacements," according to IDC.

"What PC vendors have to think hard about is how to enable a compelling user experience that can justify spending on the added horsepower," noted Chou.