Traditional IR handheld remote controls have two main limitations—first, they require line-of-sight clearance to the host's receiver (TV, set-top-box, etc.); and second, they are unidirectional—the control is “send only” and the host they control cannot send any feedback to the remote. However, some of the remote control systems employed on a few high-end entertainment systems have optical transmitters and receivers that enable bidirectional communications, but the controls still suffer from the first limitation – they require clear line-of-sight paths to send and receive control and data.

The latest low-power RF solutions let designers cost-effectively build intelligent remote controls that no longer require line-of-sight clearance to control the TV or other appliance, and can also receive feedback or real-time messages from the appliance. A typical high-end remote control would include a microcontroller for keypad/touchscreen management, an RF transmitter and receiver (or transceiver), a display, and some power management to maximize battery life (Figure 1). To ensure that one RF remote control does not interfere with another unit in a nearby room, the controller should also allow users to select one of a dozen or more communication channel frequencies so that multiple remotes can coexist without controlling the other unit’s TV or set-top box. 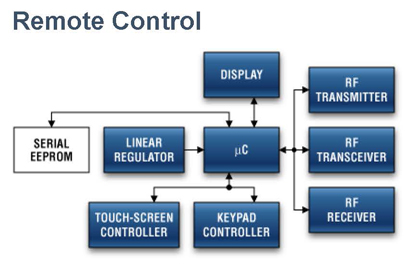 
Simple RF remote controls based on ASK/OOK protocols are already employed in garage-door openers, remote keyless entry systems, and other applications that do not require lots of data to be transferred (typically just a “handshake” to verify the transmission, and then an open or close signal). Carrier frequencies can vary widely, from just a megahertz or two going up to 433 MHz in some industrial, scientific, and medical applications. In an ASK system, the receive portion can be split into three basic blocks – an input band-pass filter that separates the carrier frequency from the spectrum of inputs, an envelope detector that extracts the desired information, and a comparator that converts the extracted information into digital form (Figure 2).

Figure 2: Simple ASK receiver based on the Maxim MAX9933.


In this receiver, the MAX9933 serves as an RF power detector, while the MAX9030 serves as a comparator. The RF signal received by the circuit is ac-coupled to the MAX9933’s input while the log transfer function for the input RF voltage makes the circuit extremely sensitive to very small signals. That allows the ASK receiver to easily discriminate between very low level 1 and 0 signals. A single capacitor, CCLPF, determines the response bandwidth of the detector. With a 10-MHz carrier and a 40-kbit/s data rate, the CCLPF capacitance is 150 pF with the R-C filter for the MAX9030 comparator consisting of a 100 kΩ resistor and a 0.22 µF capacitor.

On the transmit side, an OOK transmitter is extremely simple to implement – designers just have to send a carrier signal to a power amplifier to transmit a “1” or send nothing to transmit a “0.” This on-off signaling can be handled by a chip such as the MAX1472, which uses the input digital data stream to modulate the output of a crystal-based PLL oscillator. An ASK transmitter is basically a “bad” OOK transmitter since the ASK receiver can capture the OOK signals.

The simple OOK/ASK circuits make the transceiver and receiver solutions very inexpensive to implement. However, there are no communications standards around which the systems can be designed, so each system vendor basically sets their own frequency and data interface. Thus, each system solution is “unique,” resulting in the inability of controls designed for one system to be swapped with a control from another system.

Over the last few years, the cost of implementing a Bluetooth- or ZigBee-based wireless solution or even a wireless control based on the Z-Wave wireless interface has decreased as the volume usage has increased. The widespread use of Bluetooth interfaces in cellular phone systems, tablets, and computers, and the recent release of the Bluetooth low-power standard make Bluetooth a prime candidate for remote control applications. Furthermore, the use of a standard interface allows designers to implement “generic” universal controls that can easily be linked to a system.

For designers who do not want to design their own Bluetooth subsystem, a module in the SPBT2532 series from STMicroelectronics provides a wireless bridge between your device and any other Bluetooth-enabled device (Figure 3). The micro-sized Blue Modules come with different types of interfaces (fast UART, SPI, I²C) all packed in a 10 x 13-mm form factor. The SPBT2532 series includes four general-purpose I/O lines, several serial interface options, 4x 12-bit analog-to-digital inputs and up to 2 Mbit/s data throughput. 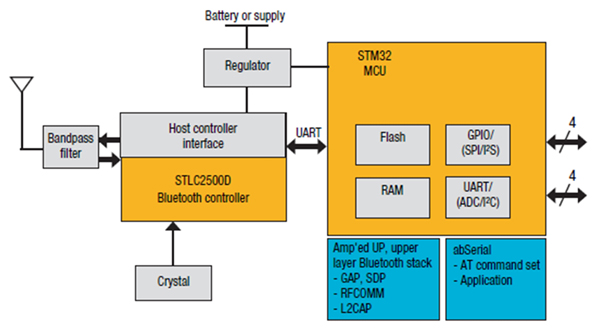 
Referring back to Figure 1, the Blue Module can replace the RF blocks on the right side of the diagram and link to the host microcontroller via the SPI port. Of course, the STMicroelectronics modules are only one of many Bluetooth options—many companies offer highly-integrated single-chip Bluetooth solutions or very-small footprint modules. In the next year, Bluetooth solutions based on the new Bluetooth low-power standard will come to market. Such chips will further reduce standby power, thus delivering extended battery life.

ZigBee transceivers can just as easily be used to implement a wireless interface. One such solution is the Ember EM260 RF transceiver, a ZigBee system on a chip (Figure 4). The EM260 is a network co-processor chip designed for the low power, low cost, ZigBee mesh networking standard. It is designed to provide designers with the flexibility of choosing their own microcontroller to run their application, while interfacing to the EM260 to provide all the ZigBee functionality. The external microcontroller can be sized exactly for the application, from the smallest, most cost-effective 8-bit controller, all the way through high-end 32-bit controllers for applications such as gateways. The EM260 integrates an IEEE 802.15.4 2.4-GHz unlicensed spectrum ZigBee radio, along with the baseband, network microcontroller and onboard memory to run the protocol stack from the PHY layer to the network layer. It includes built-in powerful debug modes including network wide debugging support to rapidly get designers from the design phase into production. 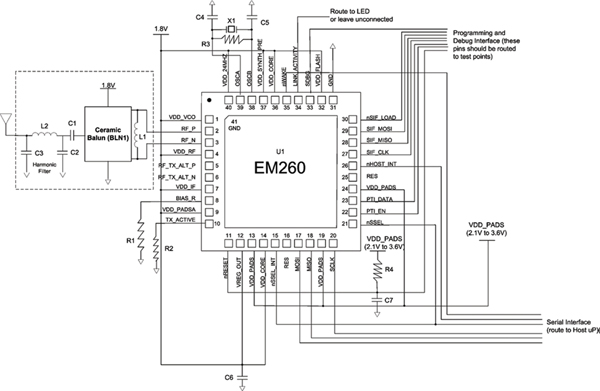 
The EM260 handles all processing and timing intensive tasks, such as AES-128 encryption, relaying packets, and handling all aspects of the ZigBee protocol, leaving the host microcontroller free to implement even the most timing-critical applications. The ability to run the application on the microcontroller of choice, using tools that the designer has already used enables rapid application development. This also obviates the need for porting of applications to other microcontrollers, thereby reducing barriers to deployment of products.

Another wireless option, based on the Z-Wave wireless interface from Sigma Designs Inc., also allows designers to assemble a low-cost intelligent remote (Figure 5). Available as a discrete chip or in a complete subsystem module, the Z-Wave solutions have a footprint of less than 2 cm2 and a power-down/sleep-mode current of just 2.5 µA. The tiny Z-Wave-based transceiver modules such as the ZM3102N or ZM4102 include multiple interfaces that allow the modules to connect to the host microcontroller via an SPI or UART port. 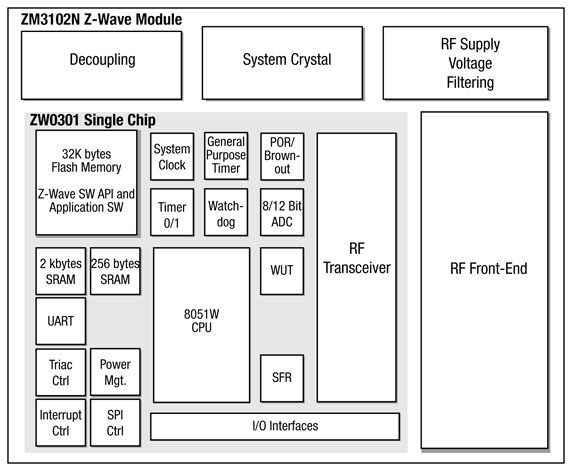 Figure 5: A complete Z-Wave wireless module in less than 2 cm2 is available from Sigma Designs.


As we have discussed, low-power RF solutions now enable designers to cost-effectively build intelligent remote controls that, unlike IR solutions, no longer require line-of-sight clearance to control the TV or other appliance, and can also receive feedback or real-time messages from the appliance. Further information on the technologies and products mentioned can be found by using the provided links to product pages on the Hotenda website.