The differences, advantages, and drawbacks of coupled- and uncoupled-inductor SEPIC voltage converters.


The single-ended primary-inductor DC-DC converter (SEPIC) is a flexible topology that can function as both a step-down (“buck”) and step-up (“boost”) voltage regulator. The design is popular with engineers because it features minimal active components, a simple controller, and clamped switching waveforms that provide low-noise operation.

The SEPIC is distinguished by its use of two inductors. The inductors can be kept separate (“uncoupled”) or wound onto a common core (“coupled”). There is little difference in how the circuit operates for either type, and designers are often unsure of which approach is best or whether there is in fact any real difference between the two.

This article takes a closer look at both types, highlighting the differences, and explains the advantages and drawbacks of each.

Unlike linear voltage regulators, switching DC-DC regulators are able to flip from a buck to boost mode when the battery voltage drops below what is required at the regulator output. The boost configuration is useful because it allows more of the battery’s energy to be accessed.

The SEPIC regulator is based on a standard buck/boost design but with an extra inductor and capacitor. A key advantage of the SEPIC topology is that, unlike the conventional buck/boost regulator, it does not invert the output voltage compared to the input.

In the SEPIC regulator design, one end of the primary inductor is connected to the battery positive terminal (hence the SEPIC’s name). The capacitor blocks any DC component between the input and output. The addition of this capacitor means that a second inductor must be added so that the diode’s anode can connect to a known potential (typically ground).

The second inductor can either be coupled to the primary or separated (uncoupled). Figure 1 shows a coupled-inductor SEPIC. In this circuit, when the switching element (field-effect transistor (FET) [Q1]) turns on, the input voltage is applied across the first inductor (the primary winding). Since the winding ratio of the coupled core is 1:1, the voltage inducted on the secondary winding is also equal to the input voltage. 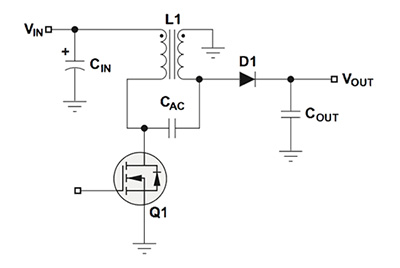 The circuit in Figure 1 operates in a very similar fashion when the coupled-winding arrangement is replaced with two uncoupled inductors. However, while the inductors in the coupled version must be matched (that is, the volt-microsecond balance must be maintained), that is not the case for the uncoupled version.

Nonetheless, engineers often assume that the inductors in the uncoupled design have to be matched. However, while this is acceptable and can be done to keep things simple, the output inductor can also be of a lower value (and consequently be smaller and cost less) than the input side. The output side inductor’s value can be calculated by scaling the value of the primary inductor by a ratio equivalent to typical values of VOUT/VIN.

A tale of two SEPICs

It turns out that the voltage- and current-waveforms of an uncoupled-inductor SEPIC is quite similar to those of the coupled-inductor version. In fact, the waveforms are so similar that it’s difficult to tell them apart. So if there is little difference in circuit operation between the SEPIC types, does it matter which one is employed?

A considered choice is important because each technology has its advantages. For instance, a coupled-inductor SEPIC regulator is often selected because of its reduced component count, higher level of integration, and lower total inductance requirement compared to using two single inductors. A key advantage is that the regulator’s ripple current is divided between the coupled inductors allowing the inductance of each to be halved. The design then benefits from a smaller input capacitor and simpler EMI filtering.

However, the downside of a coupled design is that there’s a limited selection of off-the-shelf higher-power coupled inductors. One option to overcome the paucity of commercial options is for the engineer to design his or her own device; but then they must specify all electrical parameters, as well as deal with the long lead times associated with sourcing bespoke components.

Choosing uncoupled inductors opens up a much broader selection of off-the-shelf components. Since the inductors don’t have to be identical, different component sizes can be selected for each, providing an even greater selection. However, even though the second inductor can be smaller than the first, typically an extra 10 percent board area is still required for two uncoupled inductors compared to a coupled-inductor component.¹

One company that does offer a good range of coupled inductors for SEPIC regulator applications is Würth Electronics. The company’s WE-DD range, for example, comes in five different sizes and can operate with a DC current up to 8.6 A and a saturation current up to 18 A (Figure 2). Würth Electronics has also produced a useful Product Training Module about its coupled-inductor products. 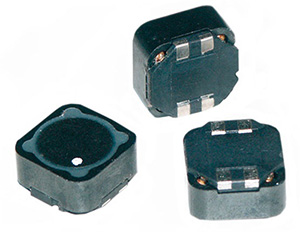 There are many suppliers of uncoupled inductors for SEPIC regulator applications including Würth Electronics again, Bourns, Murata Power Solutions, and TE Connectivity.

There is a small gain in efficiency of up to 0.5 percent for coupled-inductor designs. Figure 3 shows the efficiency of two comparable designs for VIN = 12 and 24 V and VOUT = 16 V. This efficiency gain is typically down to lower winding losses from the smaller inductors used in the coupled design. 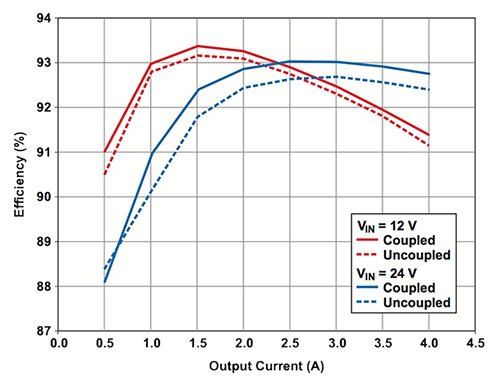 Figure 4 shows a Texas Instruments LM2735 switching-voltage regulator used in an uncoupled-inductor SEPIC configuration. The LM2735 is a 2.1 A switching regulator that can be internally set to operate at either 520 kHz or 1.6 MHz. The input voltage range is 2.7 to 5.5 V and the output voltage range is 3 to 24 V. The company says that the LM2735 allows the use of small inductors and capacitors while operating at efficiencies up to 90 percent. The design shown in Figure 2 (1.6 MHz, VIN = 2.7 to 5 V, VOUT = 3.3 V at 500 mA) employs two identical inductors measuring 6.8 µH.

Figure 4: Uncoupled-inductor SEPIC regulator design based on the TI LM2735.

Maxim Integrated also offers an integrated-switching-voltage regulator for SEPIC designs. The MAX629 is designed to supply output voltages up to 28 V from input voltages in the 0.8 to 28 V range. The MAX629’s switching frequency of up to 300 kHz allows for the use of small coupled or uncoupled inductors.

The SEPIC topology is a good alternative to a buck/boost regulator with the added advantage that the output voltage is not inverted. The regulator can be implemented using either a coupled inductor or two uncoupled windings. The coupled-inductor version brings slightly improved efficiency, reduced circuit area, more benign control-loop characteristics, and fewer EMI challenges than the uncoupled-inductor type. However, it is easier to source uncoupled inductors — an important consideration if time-to-market is critical.