The new generation of COB LED arrays is described and their advantages explained for designing compact, sleek directional lighting for retail applications.

Chip-on-Board (COB) LED arrays have become popular because they make it easy for lighting engineers to develop a product with the luminosity offered by multiple LEDs without the accompanying challenge of assembling, powering, and thermally managing groups of LEDs on a single substrate. LED makers have done the hard work by supplying modular solutions that deliver both a ceramic package and a high level of integration. Moreover, COB LED arrays allow lighting manufacturers to take advantage of efficiency-enhancing techniques such as “remote phosphor” (see the TechZone article “Remote Phosphor Offers Alternative to White LEDs”).

Now a second generation of COB LED arrays delivers even greater luminosity from fewer LEDs, further improving “lumen density” and allowing manufacturers to shrink the size of the light-emitting surface. Such COB LED arrays can be fitted to tiny directional light fixtures while providing the high luminosity and narrow beam angle retailers in particular demand from this type of lighting.

This article describes the new generation of COB arrays from major manufacturers and explains their advantages for engineers designing compact, sleek directional lighting for retail applications.

Although the performance of LEDs has improved dramatically, single devices still do not produce enough output for mainstream lighting. For example, a single 100 W, 120 V incandescent bulb generates 1,700 lumens (at an efficacy of around 17 lm/W). In comparison, a popular LED such as Seoul Semiconductor’s Z5M1 generates 145 lm (350 mA, 2.95 V, 140 lm/W). A lighting designer would need twelve of the Seoul Semiconductor devices to provide approximately the same output as the bulb.

Grouping LEDs into arrays to match the output of conventional lighting introduces challenges from illumination, optical, and manufacturing viewpoints. To address the problems of designing and then assembling an LED array, LED makers now offer a modular solution in the form of the COB LED array. Such a device delivers both a ceramic package and a high level of integration (see the TechZone article “The Rise of Chip-on-Board LED Modules”).

The lumen density of the first-generation of COB LED arrays dictated that the light-emitting surface had to be at least 9 mm in diameter to ensure sufficient output for lighting applications. LED COB arrays with 9 mm light-emitting surfaces such as OSRAM’s SOLERIQ P9, an 1800 lm (700 mA, 29 V, 89 lm/W) product and Cree’s XLamp CXA 1520, a 1245 lm (500 mA, 35 V, 72 lm/W) device have proven to be very successful, particularly in directional lighting.

This type of lighting is particularly popular in retail applications where it is used to highlight display products with beams of bright, white light. Such displays are more effective if the illumination can be directed in tight beams with little spreading of the light (Figure 1). 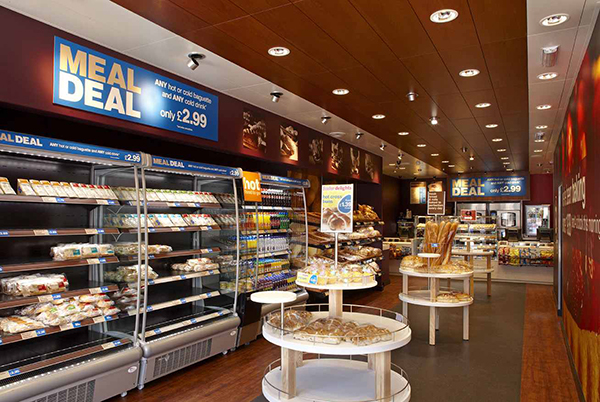 Engineers describe the pattern of light delivered by directional lamps in terms of beam angle and field angle. The reference measurement is the “center beam candlepower” (CBCP) determined by measuring the luminous intensity at 0° (i.e., on the centerline of the directional lamp’s light-emitting surface). Beam angle refers to the portion of the lamp’s beam where the candlepower is greater than 50 percent of CBCP. Field angle describes the larger area of the beam where the candlepower is greater than 10 percent of CBCP. The values are derived from a relative intensity versus angular displacement plot (Figure 2). Candlepower equates directly to candela (cd), the unit of luminous intensity (which is the quantity of visible light from a source emitted in unit time per unit solid angle. See the TechZone article “Decoding Luminous Intensity Distribution Data for LED Modules”). 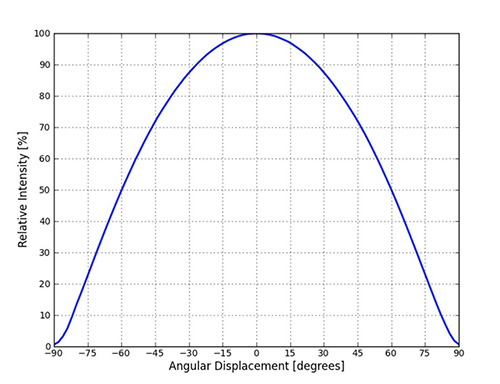 Lighting designers, keen to extend the advantages of COB LED arrays to a wider range of products, are calling for even smaller products. Aimed at satisfying this demand, a second generation of COB LED arrays is now hitting the market. The new devices take advantage of the increasing efficacy of white LEDs to further improve lumen density.

LED makers, such as Philips Lumileds and Cree, have introduced families of COB LED arrays with light-emitting surfaces of diameters as small as 6 mm, but with sufficient light output to approach that of the older 9 mm light-emitting surface devices. These new products offer smaller dimensions combined with low thermal resistance, and as such are suitable for the most compact directional lighting. A further key advantage, particularly for retail applications, is that these smaller COB LED arrays can be teamed with optics that allow tighter beam and field angles (Figure 3). 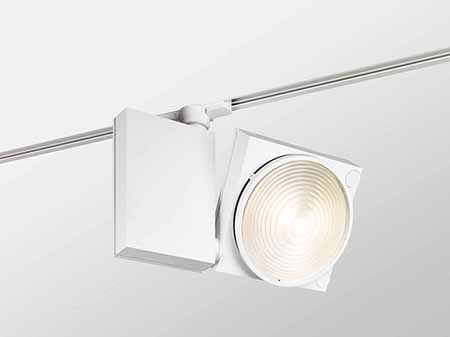 Philips Lumileds, for example, has recently introduced its LUXEON COB 1202 LED array (Figure 4) which features a 6.5 mm light-emitting surface. The product is part of the company’s CrispWhite Technology  range. 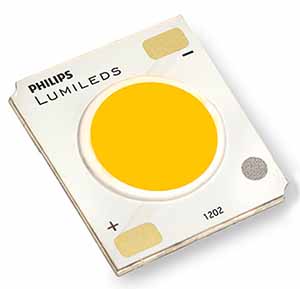 The company claims the small light-emitting surface of the 1202 produces similar output to the previous generation of 9 mm diameter COB LED arrays, but with a higher CBCP. According to the datasheet, the device delivers 65,000 cd at a 10o beam angle. Philips Lumileds also notes that the 1202 product is available in a “very warm” 2200 K version for retail applications requiring a “candle-like glow.” The 3000 K version of the product produces 600 lm (200 mA, 85 lm/W) and has a color-rendering index (CRI) of 92.

Continued improvements in LED efficacy have allowed manufacturers to develop a second generation of COB LED arrays with enhanced lumen density. These new devices offer significantly smaller light-emitting surfaces while retaining the light output of the older, larger COB LED arrays. By using these new products in their directional lighting, designers are able to develop the bright, narrow-beamed lighting demanded by the retail sector.