A look at Linear Technology's LTM8001 uModule regulator with individually rated output currents of 1.1A in a single ball-grid-array (BGA) package.


Low-dropout (LDO) regulators are often used as ripple-rejecting post-regulators on the outputs of switching DC/DC converters. Besides improving output regulation and minimizing output ripple and noise, such LDOs also improve transient response. However, as a discrete component added to the board, it requires additional board space and adds to the cost of the solution. Another limitation is that the LDO’s output current is limited by the device’s temperature rise due to power dissipation, which increases as output power increases.

To address this issue and increase the available output current, suppliers like Linear Technology have combined a high-efficiency switching DC/DC converter with multiple LDOs in a single package. The LDOs can be operated in parallel to give the designers several easy-to-implement options for a variety of input-output voltage combinations. As a result, the designer can generate multiple output voltages with varied output currents. Or the engineer can parallel all the LDOs and spread the heat to generate a single output at maximum rated current and power.

By combining a high-efficiency step-down switching converter with an array of five low-noise LDOs, with individually rated output currents of 1.1 A in a single ball-grid-array (BGA) package, Linear’s μModule regulator LTM8001 provides such a solution. In an application note entitled “µModule Regulator Combines a Switcher with Five 1.1 A LDOs: Use Them for Multiple Low Noise Rails, or Parallel Them to Spread Heat and Share Current to 5 A” Linear application engineer Andy Radosevich discusses schemes for operating the LDOs in parallel to spread the heat and increase the output current at a specific voltage or using them to generate multiple output voltages.¹

Essentially, the 5 A step-down converter LTM8001 operates over an input voltage range of 6 to 36 V and supports an output voltage range of 1.2 to 24 V. The buck regulator’s five 1.1 A linear LDOs may be connected in parallel to accommodate a wide variety of load combinations. While three of these LDOs are tied to the output of the buck converter, the other two are tied together to an undedicated input, as shown in Figure 1. 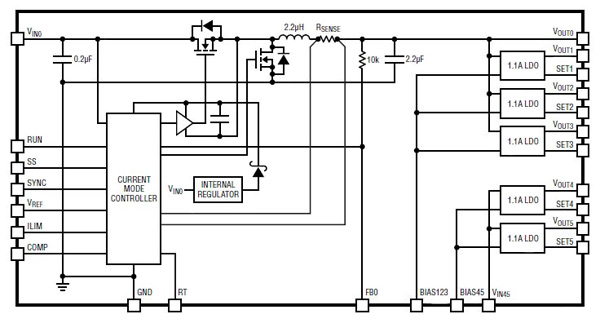 Figure 1: Three of the step-down converter’s five LDOs are tied to the output of the buck converter, while the other two are tied together to an undedicated input.

Since the LTM8001’s internal LDOs are typically set up to post-regulate the output of the built-in switching converter, the LDOs may be connected in parallel to boost the output current at the desired output voltage. However, to operate an LDO closer to its rated output current, the input-to-output differential must be low because it produces more heat as the input-to-output differential voltage increases, according to Linear. The application note in Reference 1 indicates that when the input-to-output differential is low, approaching the dropout voltage, the LDO can operate close to its rated output current. As a result, and as per the application note, the switching converter’s output must be near the minimum input voltage of the highest-voltage output LDO.

Furthermore, if the LDOs produce multiple output voltages, LDO output current must be de-rated for those LDOs with relatively low output voltages. Nevertheless, according to Linear, any derated current can easily be recovered by paralleling the LDOs to both spread heat and multiply the current capability.

The circuit in Figure 2 shows a scheme to operate LDOs in parallel to increase the output current and spread the heat. As shown, all five LDOs are connected in parallel to produce a single 2.5 V, 5 A output. In this case, the LTM8001’s built-in switching converter produces an output at 3 V, 500 mV above the 2.5 V output of the LDOs. This input-to-output differential voltage is low enough to allow the LDOs to operate near their rated load current of 1.1 A. As a result, the maximum output current generated is 5 A with an input supply of 12 V. According to Linear’s application note, the choice of a 500 mV differential is based on a combination of parameters, which include the desired maximum output current, drop-out margin when accounting for part-to-part variation, effect of operating temperature, and transient response performance.

Figure 2: LTM8001’s five LDOs are connected in parallel to produce a single regulated 2.5 V output at 5 A.

An LTM8001-based solution for dual low-noise outputs is illustrated in Figure 3. In this scheme, the input supply is again 12 V, but the LDOs are configured to produce two regulated outputs at 5 and 3.3 V. The 5 V LDO output has the same low 500 mV input-to-output differential voltage used in the previous case so that the LDOs 1 and 2 can be operated near their rated currents. Likewise, the input-to-output differential voltage for the 3.3 V output is higher so the output currents for LDOs 3, 4, and 5 each require derating to 330 mA. Nevertheless, the three LDOs in parallel perform heat spreading, so the available combined output current of the derated LDOs increases to 1 A.

To minimize voltage ripple, the capacitance used on the switching converter output VOUT0 and LDO outputs VOUT1 - VOUT5 are optimized to minimize voltage ripple. Similarly, the circuit shows that bias input from VIN is filtered. Because LDO reference is a source of noise, the application note shows that capacitors are added to SET1 – SET5 to bypass LDO references. Consequently, measured noise for the dual output circuit in Figure 3 shows that the output noise spectrum is minimized. Figure 4 shows that the first-harmonic peak is –63 dBm for the 5 V output. 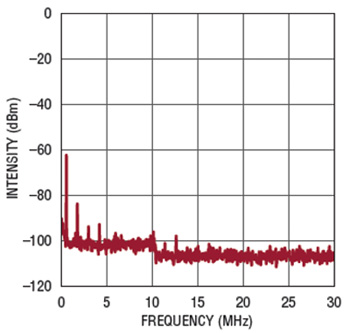 Figure 4: The output noise spectrum for 5 V output in Figure 3 is minimized with a first-harmonic peak at –63 dBm.

In summary, the five LDO outputs of the high-efficiency step-down converter LTM8001 can be configured to produce up to five different output voltages or combined to produce a single output at higher current.

For more information on the product discussed in this article, use the link provided to access product pages on the Hotenda website.