Manufacturers work hard to produce LEDs with consistent correlated color temperature (CCT) and luminous output, but some variation is inevitable and it does not take much disparity for the consumer to notice.


Manufacturers work hard to produce LEDs with consistent correlated color temperature (CCT) and luminous output, but some variation is inevitable and it does not take much disparity for the consumer to notice. Some variation in the CCT among the several LEDs that make up a single luminaire is not a problem if the light from the individual devices is sufficiently mixed by the fixture’s internal optics. However, for a large internal space or external illumination where several luminaires are employed close to each other, the color- and luminosity-variation becomes annoyingly obvious.

One solution is for a luminaire manufacturer to purchase white LEDs that have been sorted by the manufacturer into matching CCT and luminous output groups or “bins.” The drawback to this course of action is that it is expensive.

An alternative is to use LEDs from two or more bins to produce the desired result. This has the advantage of producing a fixture with consistent color and is cheaper than buying LEDs from a single bin.

This article explains the importance of CCT for LED lighting and how this is commonly achieved by selecting from discrete bins. It then describes how the same results can be achieved by mixing different color LEDs from several bins (“color mixing”).

A question of consistency

There are several ways to produce white LEDs, but the most common commercial method is to combine an yttrium aluminum garnet (YAG) phosphor with a royal blue LED. Most of the photons emitted from the LED are absorbed by the phosphor, in a phenomenon known as Stokes Shifting, and are re-emitted at a different wavelength, primarily in the yellow part of the spectrum. The combination of blue photons escaping directly from the LED, and the yellow emissions from the phosphor, produce a good approximation of white light (see TechZone article “Whiter, Brighter LEDs”).

Clever manipulation of the phosphor chemistry enables LED makers to produce devices with varying CCT that lie along the Planckian black-body locus, which lies in the white zone of the CIE xy 1931 chromaticity diagram (Figure 1). The x and y coordinates determine a point on the color space of the diagram of a specific chromaticity. 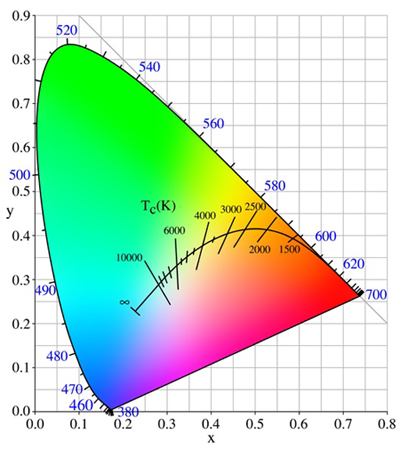 LED customers can then “pick a CCT” and manufacture a luminaire in the knowledge that it will emit photons of just the right wavelength at the required luminosity. That is the theory, but unfortunately, things do not always work out so well in practice.

While the LED suppliers can do a good job of getting their devices to emit light very close to the specified CCT, solid-state lighting is tricky business. It is virtually impossible to guarantee that chips from different batches, or even the same batch, will emit the same color. Natural variations in material and process dictate that the output varies over the surface of a wafer, affecting the chromaticity and luminous flux once the substrate is diced into individual LEDs.

This natural variability presents a challenge to a lighting manufacturer, particularly if they are seeking to gain an Energy Star rating for their products. In order to obtain such recognition, the manufacturer’s products must adhere to a rigorous set of performance requirements for LED lighting applications guidelines set out in documents such as “ENERGY STAR Program Requirements for Integral LED Lamps.”¹ This documents sets out requirements for CCT, Color Rendering Index (CRI), and lumen- and color-maintenance for an Energy Star–approved LED lighting product. (The makers of traditional lighting have also adopted these requirements to “grade” their products according to color consistency.)

The solution adopted by LED makers to ensure consistency of their products, is to sort individual LEDs from the mass-production process into “bins” containing devices with similar CIE color coordinates (or CCT). The groupings are determined by small quadrilaterals on the CIE chromaticity diagram, with vertical sets of these bins having the same CCT (see the TechZone article “Defining the Color of White LEDs”). The major LED makers use binning nomenclature and definitions adhering to the ANSI C78.377-2008 LED binning standard. Figure 2 shows how devices from the same manufacturing batch can be sorted into many adjacent bins. Some of the bins contain many LEDs, while others contain few or none at all. 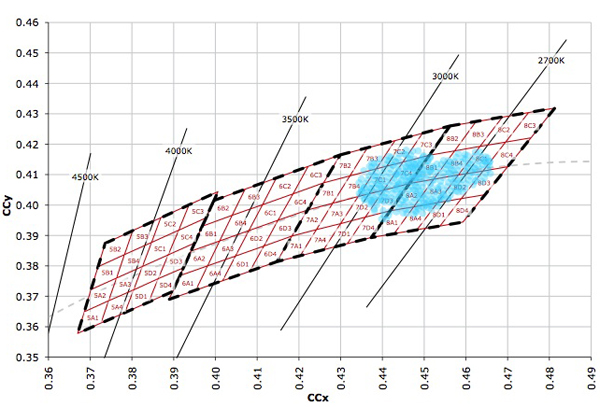 The big drawback for manufacturers using binning as a method to ensure color consistency of their fixtures is cost; it is expensive to buy LEDs from a single bin or a small group of bins (particularly if the chosen color is from a bin or bins containing precious few devices).

Some LED manufacturers have reduced the cost by decreasing the number of bins from which the customer can make a selection. Cree, for example, offers their Xlamp XM-L EasyWhite products using this strategy. If the customer prefers, instead of selecting from dozens of chromaticity bins, there is only one large chromaticity bin for each standard color temperature, with each of these four bins centered on the Planckian locus. Selecting from these larger bins is cheaper than choosing from smaller bins, but is still more expensive than adopting a color-mixing approach.

Despite the fact that contemporary LEDs demonstrate high efficacy, for example, a single chip such as OSRAM’s OSLON SSL boasts an efficacy of 125 lm/W (at 3.1 V and 350 mA) and outputs up to 136 lm, a single device on its own is insufficient for general lighting applications. A typical fixture for a domestic setting provides between 800 and 1,200 lumens. Consequently, manufacturers group several LEDs together in a single luminaire to provide satisfactory illumination.

Eight LEDs per fixture is typical, which fortuitously allows lighting makers to make the most of color mixing. The technique takes advantage of the fact that LED chromaticity and luminous flux are additive properties. In fact, single white LEDs employ color mixing by combining emissions from the royal blue LED and phosphor as illustrated in Figure 3.

Figure 3: The most popular type of white LEDs use additive color mixing of blue and yellow to produce a chromaticity lying on the Planckian locus in the white area of the CIE xy 1931 chromaticity diagram.

Color mixing works because of a key characteristic of human color perception. For the human eye, two light sources appear to be the same color when they have the same “tristimulus” values, no matter what spectral distributions of light were used to produce them.² (The tristimulus values are a measure of how the three types of rod cells in the retina of the human eye react to the different wavelengths and brightness of the observed light source.)

Actual trichromatic values for a particular LED can be calculated as follows:

As noted above, the trichromatic values from several devices provide an additive effect, so a combination of four devices will yield:

This additive effect allows a manufacturer to reduce fixture costs by combining the output from LEDs taken from four different bins to meet his CCT requirement, instead of from a single (expensive) bin.

Lighting designers should note that the mixing only works well if the fixture is far enough away from the observer, so that the light from the individual LEDs from the four bins has “blended” by the time it hits the observer’s eyes. Alternatively, the fixture will require a set of secondary optics located close to the LEDs to thoroughly “mix” the light before it leaves the luminaire.

Consider the challenge faced by a luminaire designer tasked with producing a multi-LED fixture emitting “warm white” light (3,000 K). His first option is to purchase Cree’s XP-E LEDs from bin 7D3 which satisfy the specification perfectly. However, that is also the most expensive option, particularly if the fixture is destined to remain in production for an extended period.

A second option is to reduce the cost by purchasing devices from two bins. Table 1 details the characteristics of two suitable options from the company’s XP-E product range.


Table 1: Cree XP-E LEDs from these two bins can combine to provide light of the same chromaticity as a single device from bin 7D3.

Using the formulas detailed above, the resultant color mix for these two devices comes out as:

When homogenously mixed, the combination outputs the same color as a device from bin 7D3, and hence meets the original specification (Figure 4). 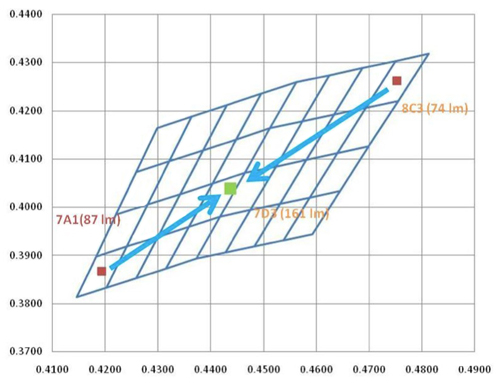 Figure 4: Mixing the output from bins 7A1 and 8C3 creates the equivalent color of a device from bin 7D3 (Courtesy of Cree).

Depending on the luminosity requirement for the luminaire, a lighting engineer could further decrease the cost of the LEDs by combining devices from three or even four bins. Figure 5 illustrates the effect for four devices. 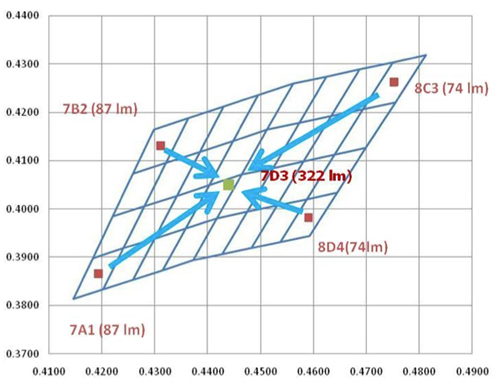 Figure 5: Adding two more bins (7B2 and 8D4) to the mix retains the same color as the output shown in Figure 4, but boosts the luminous output to 322 lm (Courtesy of Cree).

In theory, any number of bins can be selected for the color mixing operation, but in practice there are some practical limitations to using widely spaced color bins that are application-, implementation-, and viewer-dependent. For example, street lighting, where the lighting source is a large distance from the observer and very bright relative to the background light, is quite forgiving of color mixing using LEDs from widely-spaced bins. However, non-diffused indoor applications may exhibit perceptible color variation between individual LEDs used in the light source when LEDs from very diverse bins are employed.

A lighting engineer who is familiar with the color mixing technique can make a good guess at which combination of bins will converge on a desired CCT. Using dedicated software applications from the major LED makers can accelerate the process. Cree offers their “Binonator” PC software application which is available for controlled-access download from the company’s website.

LEDs offer many advantages, including high efficacy, longevity, and robustness, but they are tricky to manufacture consistently. The suppliers are overcoming this challenge by sorting their products into bins, each containing a group of closely-matched devices. A lighting maker can then choose LEDs from a single bin to meet specific CCT requirements.

However, pioneering lighting-fixture manufacturers have turned the additive effect of combining products from several different bins to obtain the desired CCT to their advantage because it saves money.

Careful selection of several bins to make up the LEDs in a lighting fixture can ensure the illumination matches the color of a comparative fixture employing LEDs from a single bin, provided the lighting designer takes care to ensure that the contribution from the individual LEDs in the fixture are thoroughly mixed by secondary optics.

For further information on the parts mentioned in this article, use the links provided to access product pages on the Hotenda website.