Tricolor optical feedback is a proven color management solution, but its implementation can be complex


Tricolor optical feedback is a proven color management solution, but its implementation can be complex. It doesn’t need to be.

Combining red, green, and blue LEDs (light emitting diodes) to form a light source is an attractive proposition. Such a multi-color light source can generate a wide range of colors. The LEDs themselves are robust and highly efficient. LED light sources will improve many existing applications, such as LCD backlighting, and enable new ones, such as adaptive automotive interior lighting. There are, however, challenges to overcome before a high-quality multi-color LED light source can be produced. This paper describes an Application Specific Standard Product (ASSP) integrated circuit that addresses many of those challenges. 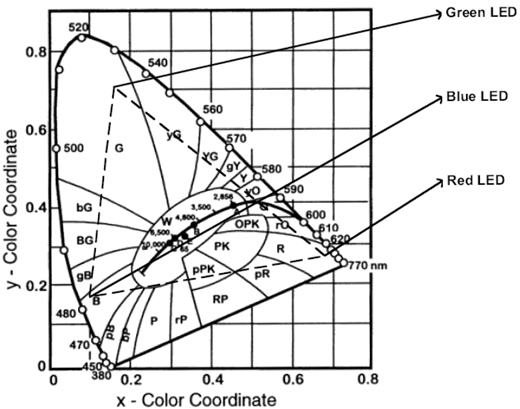 Figure 1: CIE 1931 Color Space. The triangle represents the color gamut formed by red, green, and blue LEDs. W—white, R—red, G—green and B—blue. The x, y coordinate defines the chromaticity of a light source. A third axis (not shown), Y, is needed to define the brightness of the light source.

The simplest multi-color LED light source consists of three sets of LEDs—red, green, and blue—with each set driven by a separate driver module. The resultant color of the light source is dependent on the ratio of light intensity between the red, green, and blue sets of LEDs. The light intensity of an LED can be controlled by varying its drive current, or by varying the duty cycle of the LED using pulsewidth modulation (PWM). The PWM method is popular because the relationship between duty factor and light intensity is more linear than that of current vs. intensity.

This simple, open loop method of constructing an LED light source has a critical flaw. Since an LED’s optical characteristic varies with operating conditions, the brightness and chromaticity of the combined RGB light output will vary. In addition, LEDs vary part-to-part, contributing to more variation in the RGB light output. Figures 2 and 3 below illustrate examples of LED variation.

One solution is to use optical feedback to produce a closed-loop system. A basic setup consists of a photo sensor to record the brightness of the LED light source and a method of modulating the light output with respect to the photo sensor readings. This permits the brightness of the LED light source to be consistent even if the individual LEDs vary. (i.e., the sum is constant, though the components vary). 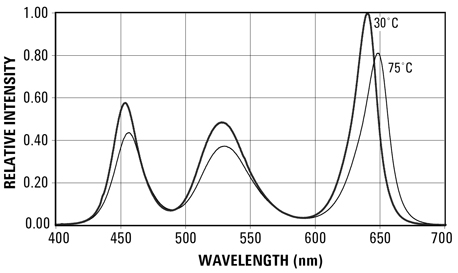 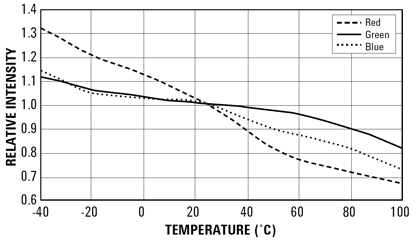 In Figure 4, an integrator (labeled 22) outputs a voltage that is dependent on the amount of light falling on a photodiode (11a). That voltage is compared against VSET. A counter (34) increments or decrements depending on the comparator decision. The counter value is used to drive a DAC (37), which determines the LED driving current. 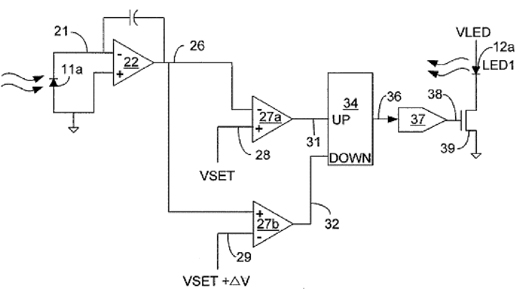 A more advanced optical feedback method uses a tricolor photo sensor, which typically consists of three independent photo sensors with a tricolor filter placed over them. Thus, the photo sensors are able to record color information, rather than just brightness. This allows the ratio of light intensity between red, green, and blue sets of LEDs to be controlled. This is a critical feature as it allows the brightness and chromaticity of the RGB light source to be controlled. It is in tricolor optical feedback where the ASSP plays an important role. 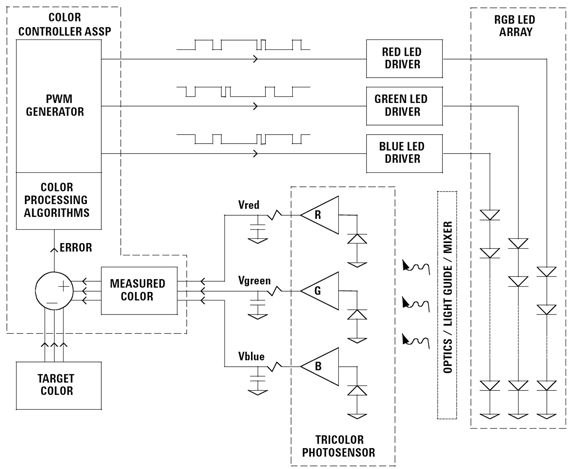 Figure 5: The tricolor optical feedback system. Each photo sensor has a color filter placed over it. The low-pass filters perform a “time-average” on the sensor output such that a DC voltage level is passed to the controller.

Essentially, a tricolor photo sensor creates a three-dimensional color specification system (henceforth known as the RGB sensor color space). This system allows specific colors to be specified in terms of the sensor’s output voltage. For example, a D65 white with a particular brightness can be specified as:

Figure 6 illustrates the idea in a different way. All possible target color setpoints are specified as coordinates within the RGB sensor color space formed by the red, green, and blue sensors. As the LEDs change in characteristic, the measured color moves away from the target. The ASSP will detect this and adjust the LED PWM signals accordingly. 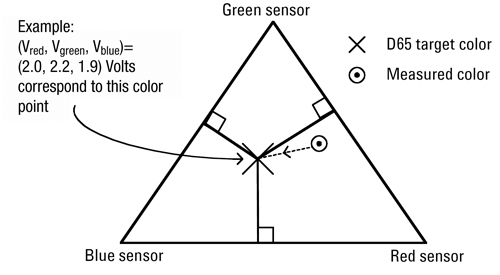 It is important to understand that as LEDs age, they degrade in light output intensity. Hence, over time, an RGB LED system’s maximum achievable brightness will decrease. In most applications, a gradual and graceful reduction in brightness is acceptable; what is not acceptable is a change in the chromaticity of the RGB light system. The ASSP has a feature that gracefully controls the diminishing brightness of the RGB light system such that the chromaticity is kept steady (within tolerance) even as the maximum achievable brightness decreases.

As attractive as RGB light systems are, there are challenges that hinder widespread usage of this technology. There exists a need for a device that “hides” the complexity of tricolor optical feedback behind a simple user interface. The following sub-sections describe how the ASSP accomplishes this. 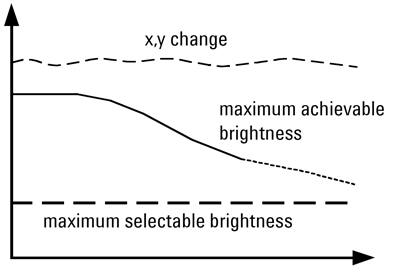 Figure 7: The ASSP keeps the chromaticity (defined here as 1931 x, y coordinates) of an RGB light source steady (within tolerance) even as the maximum achievable brightness decreases over time.

The ASSP incorporates a set of algorithms that analyze color information from the tricolor photo sensor and compute the PWM drive signals to achieve the target color setpoint. The ASSP samples the photo sensor at about 100 times per second to ensure that the periodic adjustment to the PWM signals is not perceptible to the human eye. As mentioned previously, the ASSP also contains an algorithm that prevents LED degradation from changing the chromaticity of the RGB light output.

No other calculations are necessary to achieve and maintain a target color.

This relates to device independence in selecting a target color setpoint.

Figure 8: The ASSP samples the tricolor photo sensor directly and translates the readings into the required LED PWM signals.

The tricolor photo sensor in system A will produce the voltage levels above when D65 light output is achieved.

System B’s photo sensor will produce a different set of voltage levels even though it generates the same D65 light output as system A. In other words, the color specification system as defined by the RGB sensor color space is unique system-to-system.

The ASSP incorporates a calibration procedure to allow every system to use a standard color specification system. CIE 1931 xyY and CIE RGB are two such systems built into the ASSP. By having a standard color space input, the user can send the same target color to every system and expect that each system will produce the same color (within tolerance). 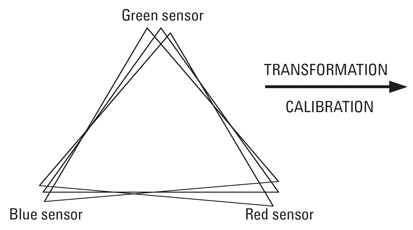 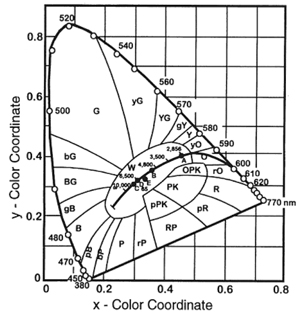 Typically, the ASSP only requires only passive components for support and an external PROM to store calibration data. In most cases, memory space can be shared with other peripherals at a system level, since calibration data is only 31 bytes.

The ASSP has a standard two-wire 100 kHz I2C interface, and all major functions are mapped to an 8-bit address space. For example, to run the calibration calculator, simply write 0x01 to register CTRL2. Implementation details can be found in the device datasheet.

Color selection is simple. In the examples, a D65 target color was specified in terms of sensor voltages. In actual application, the target color can be specified as coordinates in the CIE 1931 xyY system. Other color systems such as CIE uvY and CIE RGB can also be used. For example, to select illuminant E as the target color, a value of (x, y, Y) = (330, 330, 250) is sent to the appropriate registers in the ASSP.

The ASSP will change the RGB light output immediately after the “update” register bit is set.

Figure 10: Typical configuration of a tricolor color management system. The internal reference and oscillator options are enabled. Only passive components support the device. 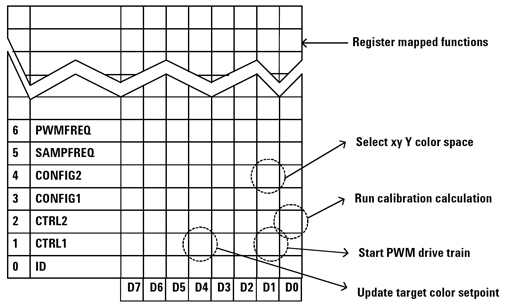 Figure 11: A sample of the ASSP register space. Each bit is mapped to a function. 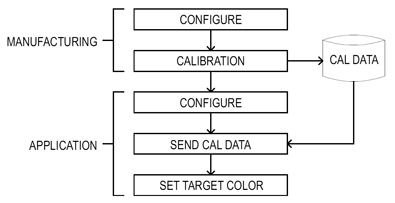 Figure 13 shows the performance difference between an open-loop and a closed-loop RGB light system. The experiment was conducted using a 9000 K white target color and uses duv as the figure-of-merit.

A good rule-of-thumb to judge performance is to use duv = 0.005 as the minimum change in chromaticity before the human eye can detect a change. 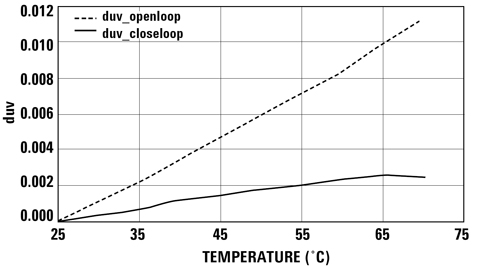 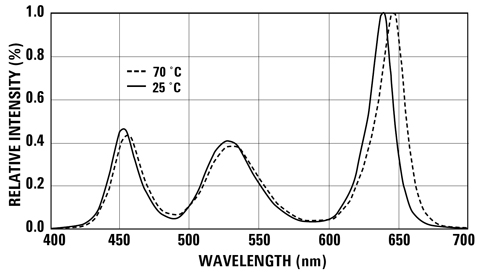 
Figure 14 illustrates the severity of LED spectral shift as temperature increases. This data was collected from a closed-loop system with a 9000 K white target color. Although the spectral curves shifted significantly, duv was kept below 0.005 by the feedback system.

RGB LED lighting is an appealing lighting solution. However, the variability of LED characteristics causes the RGB light to deviate from the intended color. Tricolor optical feedback is a proven solution, but its implementation can be complex. Avago Technologies’ feedback controller simplifies the implementation of such a system.