Class A Color Next for Solid-State Lighting

Gamut Area Index (GAI) complements CRI and CCT in the Class A color concept. Certain manufacturers are incorporating Class A color into their LED products.


LED makers characterize the light emitted from their products using industry-accepted parameters such as Color-Rendering Index (CRI) and Correlated-Color Temperature (CCT). CRI considers light quality and CCT is a measure of the source’s perceived temperature. Such measures enable lighting engineers to choose light engines that will appeal to consumers looking to replace inefficient incandescent bulbs with efficient and long-lasting illumination.

However, new research claims that CRI and CCT alone are not enough to truly characterize the LEDs used for solid-state lighting (SSL). Instead a concept known as “Class A color” which combines CRI and CCT with Gamut Area Index (GAI) has been suggested as a superior alternative (GAI is a measure of color saturation and strength). The research concludes that 75 percent of consumers agree that Class A Color light sources provide the best color rendering and optimum saturation levels.

This article explains what GAI is and how it complements CRI and CCT to underscore the concept of Class A color. The article then leads on to explore how leading manufacturers are incorporating Class A color into their latest products.

It makes little difference whether domestic or office lighting is supplied by traditional light sources such as incandescent, fluorescent or halogen, or more modern SSL; the consumer has strong views on the “quality” of the illumination. Their viewpoint varies depending on the location: in offices, for example, workers are more accepting of relatively harsh, “bluish” light because it makes it easier to read documents and work in front of a computer screen, but at home, a softer, warm illumination is often preferred because it aids relaxation.

Engineers have worked hard to turn the consumer’s qualitative assessment of light into a quantitative one such that different light sources can be characterized and directly compared. The two common measures of light quality are CRI and CCT.

CRI is a measure of the ability of a light source to reproduce the colors of various objects faithfully in comparison with an ideal or natural light source. The index was formalized by Commission Internationale de l'éclairage (CIE, or “International Commission on Illumination” in English).

The test uses eight or more CIE standard color samples and measures the difference in chromaticities when viewed under a reference source and the light-under test (Figure 1). The lower the difference, the higher the CRI. (See the TechZone article “What Is the Color Rendering Index and Why Is It Important?”.) 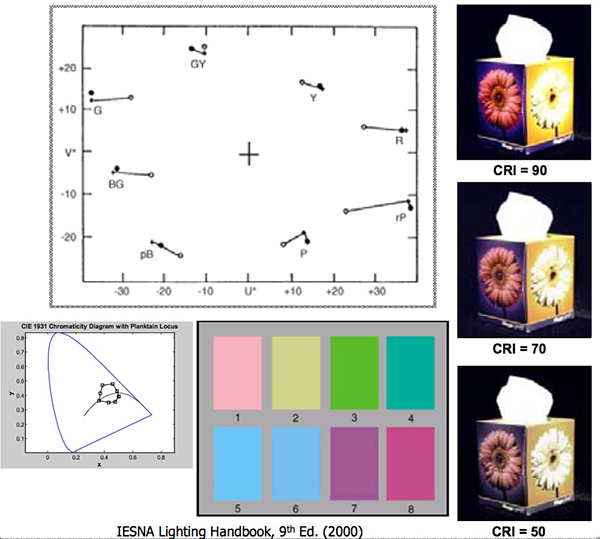 Figure 1: CRI testing using eight standard color samples to measure the difference in chromaticities when viewed under a reference source and the light-under test. (Courtesy of the Lighting Research Center at Rensselaer Polytechnic Institute)

CCT is defined as “the temperature of the Planckian radiator whose perceived color most closely resembles that of a given stimulus at the same brightness and under specified viewing conditions.” In practice, LED makers produce products with a CCT on or close to the Planckian locus that corresponds to the color that an incandescent “black body” would appear to radiate with changes in temperature on the CIE xy 1931 chromaticity diagram (“color space”).

The light from an LED-emitting light with a chromaticity on the locus is classified as “white,” but because the locus traces a line across the CIE color space, the chromaticity of LEDs at various points on the line does vary. For example, LEDs with higher CCTs contain more blue wavelengths and therefore appear to have a bluish tinge. Low CCT devices appear slightly redder.

(Note that “warmer” white LEDs actually have lower CCTs. The output from these devices contains more red wavelengths, which shifts the radiation toward the cooler end of the Planckian locus even though human perception dictates that the color is warm. “Cool” white LEDs emit more blue, and the radiation is classified as hotter, although again, humans have an alternative perception that determines the light is cooler [see the TechZone article “Defining the Color Characteristics of White LEDs”].)

A system of characterization based on CRI and CCT has worked well for an SSL industry building its reputation with the consumer. However, new research argues that to gain increasing market share requires the sector to up its game in order to satisfy increasingly more discerning buyers. The argument follows the line that CRI and CCT only do a partial job of characterization and an additional measure of light quality is needed.

In 1947 a Dutch scientist named P. J. Bouma first described the features of a light source that lead to good color rendering. In general, noted Bouma, a source with good-color-rendering properties, daylight or electric, should reveal a full range of colors (hue, lightness, and saturation), should enable good color discrimination between objects of similar spectral reflectance (for example, purple from maroon), and should not distort colors (for example, the light source should not over-enhance the redness of meat in a butcher’s display case). Bouma’s definition indicates that color rendering cannot be measured by any single metric, rather a combination of several.

Researchers at the Lighting Research Center (LRC) at Rensselaer Polytechnic Institute found that CRI and CCT are useful for describing the physical characteristics of a light source, but what’s lacking is a measure of “how the light is perceived by the human eye.”

LRC conducted experiments where they asked observers to partake in Farnsworth–Munsell 100-Hue Tests. The test measures the ability to isolate and arrange minute differences in various color targets with constant value and chroma (color purity) that cover all the visual hues described by the Munsell color system (the Munsell system is a color space that specifies colors based on three color dimensions: hue, value (lightness), and chroma).

Observers were presented with a picture collage, sequentially illuminated by two different spectral power distributions (SPD). Observers were allowed to look at the collage under the first SPD for as long as they desired before switching to the second SPD. Once the second SPD was presented, the collage could not be viewed again under the first SPD.

The study concluded that gamut area, or more precisely GAI, is a useful complement to CRI and CCT in ensuring both good color discrimination and satisfactory perceptions of object color “vividness” and “naturalness”. GAI measures the gamut of colors rendered by the light source and can be determined from the bounded area formed by connecting, in a two-dimensional color space, the color points used to calculate CRI (Figure 2). In general, the larger the gamut area, the more saturated the color samples and the easier it is to discriminate between them. 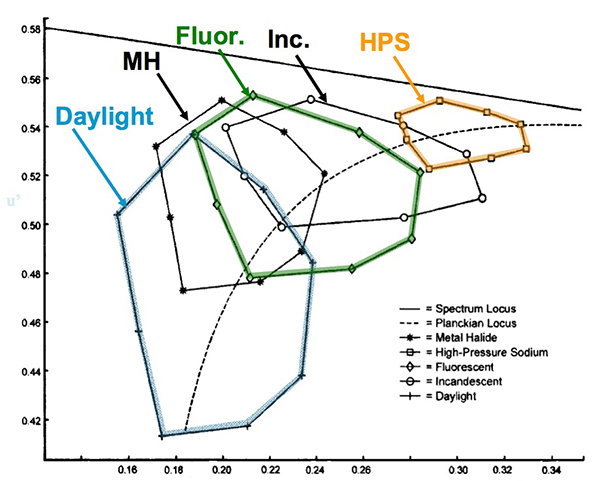 Figure 2: The Gamut Area Index of light sources is calculated from the bounded area formed by connecting in two-dimensional space the color points used to calculate CRI. (Courtesy of the Lighting Research Center at Rensselaer Polytechnic Institute)

LRC concluded that a light source providing a minimum CRI of 80 and a GAI between 80 and 100 will provide good color discrimination and make objects in the scene appear both vivid and natural providing sufficient illumination is supplied to the visual scene. In other words, consumers prefer a light source that enhances color without distortion or making the object look unnatural.

Interestingly, the research also revealed that the chip makers’ ambition to produce LEDs emitting light on the black-body locus may need to be modified. Participants in the test were shown light at six CCTs ranging from 2700 to 6500 K. At each CCT, the testers were asked to judge the quality of light at seven different chromaticity values along a vertical CCT line with the values ranging above and below the black-body locus.

Only at around 4100 K did the participants perceive high-quality white light to coincide with the black-body locus. At “cooler” (higher) CCTs, participants preferred chromaticity slightly above the locus; at “warmer” (lower) CCTs the testers preferred chromaticity significantly below the locus (Figure 3). At 2700 K, for example, the difference in terms of perception between the black-body locus and the “preferred” white light was equal to a 13-15-step MacAdam ellipse. 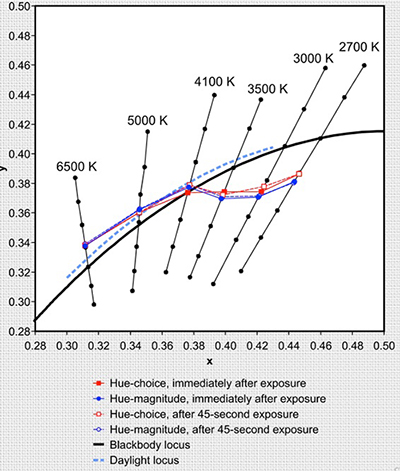 Figure 3: At higher CCTs observers preferred white points above the black-body locus, below 4100 K, chromaticity below the locus was more popular. (Courtesy of the Lighting Research Center at Rensselaer Polytechnic Institute)

LRC has used the results from the research into GAI and perception of white-light quality near to the black-body locus to define “Class A color”. To meet the definition of Class A color, light sources must have a CRI above 80 and GAI in the range of 80 to 100. In addition, sources below a CCT of 4000 K should be below the black-body locus on the CIE xy 1931 color space to match the results of the research that indicates the consumers’ white-light preference at those temperatures.

LRC concluded that light sources with high GAI and CRI are consistently perceived as higher quality by consumers than light sources that rate high in only one of these two metrics. The organization further concluded that GAI adds a third metric to CRI and CCT enhancing the quantitative measurement of light quality.¹ ²

Class A color now on the shelves

The industry has yet to generally accept Class A color as a standard definition but that has not stopped some pioneering companies from using LRC’s findings to alter their LEDs’ specifications.

Bridgelux, for example, has recently launched its Vero Décor Series Class A chip-on-board (CoB) LEDs and claims to be the first company to use the Class A color designator (Figure 4).

Figure 4: Bridgelux says its Vero Décor Series Class A CoBs are the first to have the Class A color designator.

The Vero Décor Series Class A CoBs can produce 1305 lm at 140 lm/W (26.7 V, 350 mA) and are available in CCTs of 4000 and 3000 K with CRIs up to 97 and GAIs greater than 80. The company says the products are designed for applications including high-end retail, hospitality, museums, and commercial spaces.

While not promoting its products as “Class A color,” Cree has also introduced a range of products with a CRI and GAI combination that meet the Class A definition. The XRE Series features 111 lm at 96 lm/W devices (3.3 V, 350 mA) and the 4000 K product has a CRI of 84 and a GAI of 82.

Earlier this year, Philips Lumileds announced the CrispWhite CoB LED family. The products offer 3750 lm at 90 lm/W (35.5 V, 1.2 A) and a CRI of 90. The company has stopped short of using the Class A color designator or even offering a GAI rating for the chips. However, Philips Lumileds is promoting the product’s “below-the-curve chromaticity” as a positive feature for retail location applications.

LRC and others have suggested that characterizing LEDs by CRI and CCT alone is not enough to fully quantify the light quality of white-light LEDs. The researchers have shown that light sources with high GAI and CRI are consistently perceived as higher quality by consumers than light sources that rate high in only one of these two metrics. Moreover, observers have been shown to prefer white light above the black-body locus for warmer CCTs and below the locus for cooler light.

Whether the Class A color designator will be adopted across the industry as a standard definition or dismissed as a marketing gimmick remains to be seen. However, the prospects for its adoption look promising as some of the leading LED makers have already embraced the new metric. Still others are taking heed of the research on CCT by bringing out products with a chromaticity that matches consumers’ perception of high-quality white light.

For more information on the parts discussed in this article, use the links provided to access product page on the Hotenda website.