A review of recent developments in PMICs for energy-harvesting design from vendors including Maxim, Linear Technology, Texas Instruments and Cymbet.


The power-management IC (PMIC) supports and manages the transducer and energy-collection channel, the energy-storage element (battery, conventional capacitor or supercapacitor), and the processor/wireless link. This critical block of any energy-harvesting design implements several major functions: For designers of energy-harvesting systems, there is good news: a wider choice of PMICs is now available from vendors, each with differing attributes and characteristics. Some are optimized for a specific harvesting source, while others are more general; some fulfill primarily one part of the PMIC role, while others integrate more of the essential functions.

Engineers should always keep in mind that all energy-harvesting designs are based on one principle – to accumulate over time the trickle of minuscule, sporadic energy from the source, store it, and then release it as a power pulse when needed by the rest of the system for data collection, analysis and transmission. Therefore, there are long quiescent periods when the PMIC's only activity is to allow the energy to flow to the storage element and little else, as well as periods when there is no incoming energy.

You must also be aware that a conventional DC/DC switching converter core, no matter how efficient, is generally not a good choice for energy harvesting. This is because these are designed to work with a consistent source such as battery, which is a low-impedance, somewhat regulated source. Further, the DC/DC switching converter of a PMIC must have extremely low quiescent current requirements, as there may be long periods without available source energy and thus no power-converter activity.

The Maxim MAX17710 accepts energy from a variety of transducers, manages the charging of the energy-storage element, and provides a regulated DC output to the load (Figure 1). It is optimized to work with the THINERGY ultra-thin, postage-stamp-sized micro-energy cell (MEC) rechargeable battery from Infinite Power Solutions. When no harvesting source is present, the quiescent battery drain of this IC is under 1 nA, thus increasing the likelihood that enough battery power will remain for basic operation even after a long period of harvest inactivity.

The part includes protection for the battery against undervoltage and overvoltage conditions, which many batteries – especially the very small ones used for harvesting – cannot tolerate. For the first problem, the MAX17710 locks out any load drain to prevent overdischarge of the MEC (which may damage the MEC), and unlocks it only when the harvesting source has delivered enough energy to the MEC and raised its voltage. For overvoltage conditions, which may be due to excessive charging or component failure, it regulates the input voltage and shunts excess power away from the MEC. 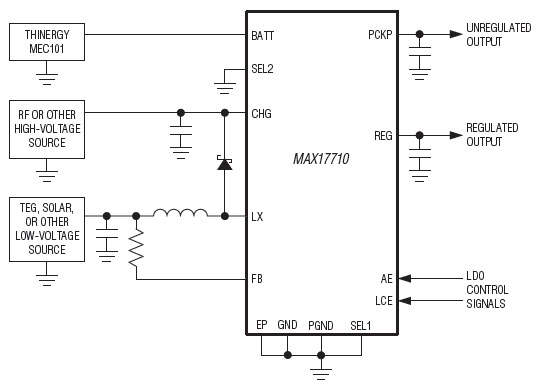 Figure 1: The Maxim MAX17710 is designed to primarily work with one battery vendor's component, but the harvested energy can come from a variety of sources.

The LTC3588 is an energy-harvesting power supply, which is designed for use with vibration-sensitive piezoelectric transducers with their high output impedance and relatively high output voltage (up to about 20 V). By combining a full-wave bridge rectifier and a buck converter, both in low-loss implementations and undervoltage lockout functions with wide hysteresis, it directs charge from the transducer to accumulate on an input capacitor. Then, when there is enough charge for the buck converter to operate efficiently, it directs the stored charge to the output (Figure 2). 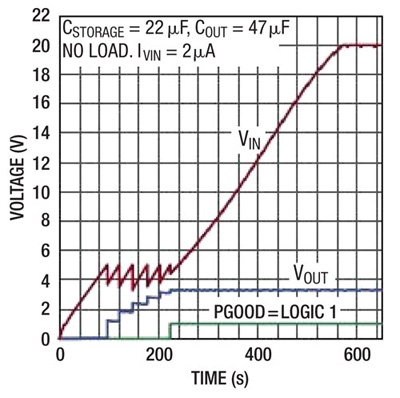 Figure 2: The start-up profile of the Linear Technology LTC3588, designed for piezoelectric source harvesting, shows how it manages the difficult transition as it accumulates enough energy for its own operation.

In contrast to the piezoelectric transducer, photovoltaic (PV, or solar cell) or thermoelectric generators (TEG) are low-voltage, high-impedance sources. The bq25504 (Figure 3) is centered on a boost converter/charger which starts when the input voltage is as low as 330 mV, and then will continue to function with VIN as low as 80 mV.

Since it is designed for sources such as solar cells, this device implements an algorithm to operate at the optimal energy-extraction and transfer point, called maximum peak power or power point tracking (MPP or MPPT), which matches the source impedance with the load impedance. For a PV source, the MPP is typically at 80 percent of the open-circuit voltage. For enhanced efficiency, the bq25504 lets the system microcontroller externally establish the MPP level; this also allows use of the bq25504 with other sources, such as the ambient electric field, which have different MPPs. 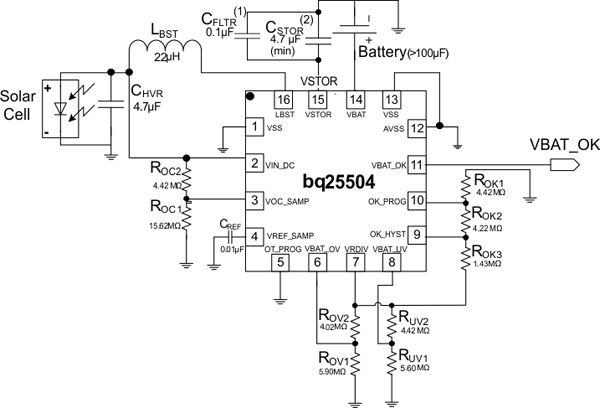 In contrast to PMICs which are designed for one or just a few types of energy sources, the CBC915 EnerChip™ EP Energy Processor is designed to be used with almost any energy source, including vibration, light, thermal, RF induction, or EM fields. It incorporates a sophisticated MPPT approach, which dynamically matches the output impedance of the transducer to the input impedance of the power-conversion stage (Figure 4); in contrast, some PMIC collection topologies use a simpler but less efficient "charge accumulation" approach. When you are only collecting nanojoules of harvested energy, even a few percentage points of improvement can be critical. 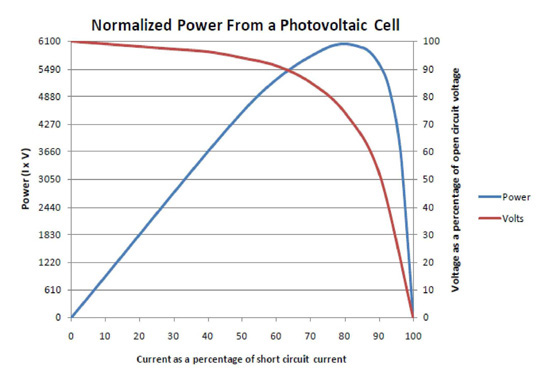 Figure 4: A sophisticated harvesting PMIC such as the Cymbet CBC915 is well suited to sources such as PV cells, where the power curve is highly nonlinear, thus connecting the cell to a load that is not matched to its impedance results in inefficient power transfer.

Why would a designer use a more general-purpose PMIC such as this one? There are several reasons: the specific harvesting transducer may not be known in advance; the end-product is intended to be used with a variety of sources and use of this type of PMIC simplifies the bill of materials (BOM); or the user wants access to more advanced MPP control for that last extra bit of performance.

The CBC915 also includes a serial UART for communication to/from the system microcontroller. Using this interface, it can accept basic operational commands and also report back on key status indicators.

When choosing a PMIC for harvesting applications, it is vital to look at the detailed specifications, of course. But along with that, there are broader questions to consider: Summary

The power-management IC (PMIC) is one of the major blocks of an energy-harvesting design, along with the transducer and energy-collection channel, the processor/wireless link, and the energy-storage element (battery or supercapacitor). All four of these blocks are now seeing new product introductions from multiple vendors, as new harvesting opportunities stimulate innovation in the others. This article has reviewed recent developments in PMICs from various vendors, along with their key attributes and capabilities. For more information on the parts discussed, use the provided links to access product pages on the Hotenda website.