Chipmakers Will Reduce Capital Spending in 2012

Capital expenditures by semiconductor companies will drop 16 percent due in part to sluggish chip demand in 2011. 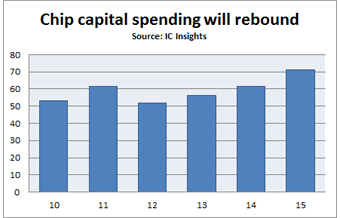 Capital expenditures by chip companies will total $61.7 billion in 2011 up from $53 billion in 2010, when spending had increased 106 percent from the previous year, the Scottsdale Ariz.,-based researcher reported.

However, sluggish semiconductor demand along with a weak economy will result in capital expenditures by semiconductor companies falling to $52 billion in 2012.

Spending will rebound in 2013, growing 8 percent to $56.1 billion and will grow through 2015 when capital expenditures by chipmakers will total $71.2 billion, according to IC Insights.

Capital expenditures are used to build new fabs and equip them or to upgrade equipment at existing facilities. Increases in capital spending result in more fab capacity.

However, 150 mm and 200 mm wafers are still widely used for less-complex chips, according to Yancey.

150 mm fabs are now fully depreciated, helping them “remain cost-effective to operate for these types of devices,” Yancey added.

Yancey noted that 200 mm wafers are usually used for the production of special-purpose logic products such as ASICs or application specific standard products, microcontrollers, digital signal processors, core logic chipsets, and many other chips.