But it's unclear whether increases in capital expenditures by semiconductor companies will have a meaningful impact on chip supply. 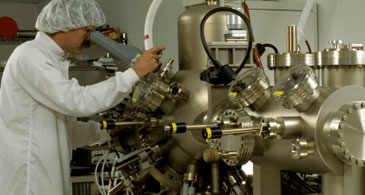 Semiconductor companies will increase their capital expenditures (capex) by about 2% this year as suppliers will spend about $59.8 billion on new equipment and fabs, according to researcher IC Insights.

Capital spending by chipmakers will rise each year through 2016, reaching $75.1 billion in 2016. That’s good news for semiconductor buyers because the investments will be used to add new chip capacity and upgrade existing facilities and equipment.

Trade association SEMI says integrated circuit manufacturing capacity will increase 2.8% this year and 5.4% in 2014. However, chipmakers’ investment in new front-end equipment to fabricate chips will be flat this year and increase 24% next year, according to Christian Dieseldorff, senior analyst and director of market research for SEMI. 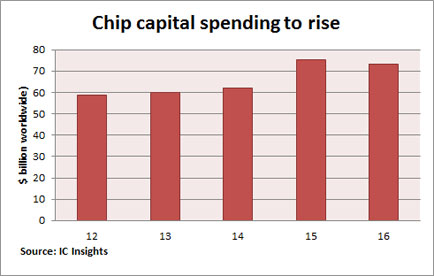 “The amount of money spent on front-end equipment is not always in direct correlation to the amount of new semiconductor capacity,” says Dieseldorff. “Not all of the money is going into adding more capacity.” It is also used to upgrade or change existing equipment, so there might not be a net gain in manufacturing capacity.

For instance, Samsung has switched some of its chip production lines from memory ICs to system LSI chips and needs to invest in new equipment for the switch, says Dieseldorff.

Chipmakers have been cautious about increasing capex and adding capacity over the past several years due to the weak economy and sluggish semiconductor demand, says Brian Matas, vice president of market research for IC insights, based in Scottsdale, Ariz.

In addition, there has been consolidation within the industry so there are fewer suppliers to make capacity investments.

“With the DRAM industry consolidating we don't see any new installed capacity coming online for DRAMs,” says Dieseldorff. “Ultimately there'll only be three or four suppliers left.” About 10 years ago there were about major 10 DRAM suppliers.

Investment in front-end equipment will be flat this year, but grow over the next several years.

Matas says another reason for sluggish investment for new equipment and overall low capital expenditure growth is chipmakers’ migration to a "fab-lite” model. Some chip suppliers—integrated device manufacturers (IDMs)—that have their own fabs are opting to outsource some semiconductor production to foundries so they don’t need to build new fabs or invest in semiconductor equipment.

Some IDMs will use foundries for advanced technology semiconductors, while others will keep their higher-end technology chip production in house and outsource less advanced or commodity products.

Matas also says about 80 percent of capex is used to purchase new chip making equipment; the rest is used to acquire land and build new fabs.

"The percentage used to be 70% for equipment and 30% for land and brick-and-mortar, but that has changed over the years," he says.

Chipmakers will invest in new equipment when they transition semiconductor production to larger size wafers or to use smaller process geometries in order to build chips that use less power.

It is unclear if the modest 2.8% increase in manufacturing capacity will be enough to meet rising chip demand this year.

“Chipmakers are cautious. They are afraid of overcapacity and that prices will decline,” says Dieseldorff, adding that the “industry is holding back in the first half” with capacity increases that could result in undersupply in the second half if the industry does not correct the imbalance fast enough.

“Chip demand is not flat. It is rising and they need to add more capacity,” he says.