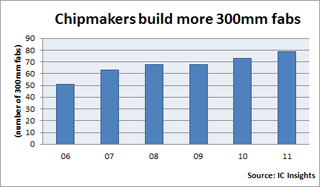 The industry has been reducing its older capacity since 2007. The bulk of these closings were older capacity includes fabs that use 200 mm, 150 mm, 125 mm and 100 mm wafers, the Scottsdale, Ariz.-based researcher reported.

The decline in 200 mm and smaller capacity continued through 2010 and 2011 as suppliers closed or upgraded fabs that used smaller wafers in order to produce integrated circuits on more cost-effectively larger wafers. A few of the fabs are being refurbished to handle large wafers or production of discrete semiconductors.

More semiconductor manufacturers are expected to shutter older fabs as they transition to the “fab-lite” business model or become completely fabless, according to IC Insights.

Regionally, Japan and North America each had 17 wafer fab closures, followed by Europe with 12 and South Korea with 3. One of the wafer fab closures in Japan was a 300 mm IC fab operated by Sony. However, the fab is being retrofitted and will return to service to produce image sensors for the company.

The Qimonda wafer fab in Sandston, Va., was the only 300 mm wafer fab closed in North America during this time. Three 100 mm wafer fabs were closed in the three-year span. These included fabs owned by DALSA in Bromont, Ontario, Canada; ON Semiconductor in Slovak Republic; and Diodes in England.

Brian Matas, vice president research at IC Insights, said that although older fabs have closed there has been a net gain in overall semiconductor capacity. More 300 mm fabs came on line, which more than make up for the capacity loss of the closing of the older fabs.

“The fabs are going off-line are doing so mostly because the bigger fabs are coming on line. In some cases semiconductor companies are upgrading facilities or operations to more efficient operations and bigger wafer sizes,” said Matas.