Chip Market Will be More Balanced in 2013

A look at the balanced chip market in 2013 and the anticipated growth for the semiconductor industry. Supply chain news from Hotenda’s Supply Chain HQ. 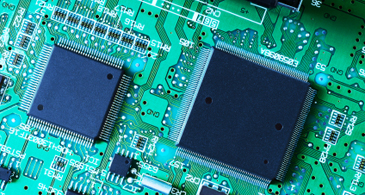 The overall average selling price (ASP) for semiconductors will be flat in 2013, although ASPs for some chips will decline, according to researcher IC Insights.

With demand growing and the average chip price firm, the semiconductor market will grow after two years of declining or slight sales growth. Most semiconductor industry analysts say growth in 2013 will be in the 4.5%-8.2% range. World Semiconductor Trade Statistics and Gartner forecast 4.5% growth, while IHS says sales will rise 8.2% and researcher IC insights forecasts 6% growth as sales increase to $337.9 billion in 2013.

“The global semiconductor market was down 1% in 2012 and there was only 2% growth in 2011,” said Brian Matas, vice president of market research for IC Insights, based in Scottsdale, Ariz. “I don't know how many years you can have flat sales growth in this industry before demand eventually starts picking up.”

In fact, IC Insights says demand will pick up significantly and forecasts a period of robust growth through 2016 for the semiconductor industry. The researcher said semiconductor revenue will increase 9% in 2014, 12% in 2015 and 14% in 2016 when chip revenue will total $467.8 billion. 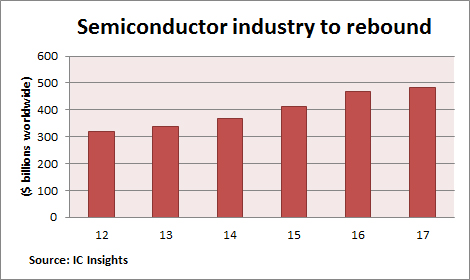 The global semiconductor industry will begin a period of robust growth in 2013.

“We think 2012 was the bottom of the most recent cycle and 2016 will be the peak of the upturn in this next cycle,” said Matas.

System growth was slow last year because global gross domestic product (GDP) growth was sluggish. Europe was in a recession, GDP growth in the United States was only 2.2% and China’s growth rate had declined from about 10% several years ago to 7.8% last year.

“For 2013 we see a bit of a rebound for GDP except for perhaps the Euro-zone,” said Matas.

U.S. GDP will rise to 2.4 percent and China’s growth will be 8.2 percent. The modest increases will translate into higher electronic systems demand, which will drive semiconductor industry growth, he said.

Many semiconductor companies are cautiously optimistic that 2013 will be a better year for sales than 2012.

“We expect the industry to grow by the low single digits, and we expect to outperform the market overall,” said Bob Krysiak, an executive vice president and president, Americas region for STMicroelectronics, headquartered in Geneva, Switzerland.

“If the semiconductor market compound annual growth is growing at 4.5%, our target is to double that and try to get to double-digit growth," said Krysiak. 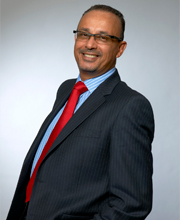 “If the semiconductor market compound annual growth rate is growing at 4.5%, our target is to double that and try to get to double-digit growth," said Bob Krysiak, executive vice president, Americas region for STMicroelectronics.He said smart phones and media tablets will continue to be important growth drivers for STMicroelectronics in 2013. And he added that demand for ST’s products by the industrial segment will pick up in 2013 if the overall economy improves.

For example, if the U.S. housing industry rebounds there will be greater demand for solid state and other lighting fixtures, which contain many of the semiconductors that STMicroelectronics builds.

"If we see housing permits in North America increase, our lighting business will rise. Same is true in Europe," said Krysiak.

He added that an increase in housing starts means more large vehicles will be built because such vehicles are used by contractors. ST makes many chips used in large vehicles.

While improvement in the overall economy will drive semiconductor revenue growth in 2013, so will firming to rising prices for chips.

“We see prices firming as a result of supply base changes,” said Matas.

Over the past 5 to 10 years many large OEMs could get price advantages because of their huge purchasing volumes and multiple sources of semiconductors, said Matas.

“The whole situation is starting to change” because more chip companies are using foundries rather than building chips themselves, he said. “Suppliers are telling OEMs ‘you can't strong arm us to get cutthroat pricing on these devices. You can’t go anywhere else because this is what's available from the marketplace.’ The severe undercutting that we've seen in previous years may be a thing of the past,” said Matas.

Firming to increasing prices means strong growth for a variety of semiconductors, including application processors for cell phones and media tablet processors, which are used in iPads and iPhones among other devices.

There will be double-digit growth in revenue for other semiconductors in 2013, including wired special purpose logic, which will increase 13%; NAND flash, 12%; and wired telecom application-specific analog devices, 11%.

“More manufacturers are moving their production to 32-bit microcontrollers,” said Matas. “A lot of companies are using the latest process geometries to make these devices and utilizing some of the smaller feature sizes to build these devices.”

Semiconductor suppliers say if the U.S. and Chinese economies grow at a faster rate than expected and Europe's financial troubles are resolved, it could result in greater-than-expected chip demand and tighter supply in the second half of the year.

“We do expect the second half to be better than the first,” said Krysiak. “There is a little inventory overhang, and if business picks up there could be some leadtime lengthening.” 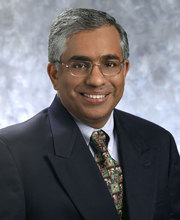 “We keep higher inventory levels than other chip companies and we have that inventory in strategic locations,” said Ganesh Moorthy, chief operating officer for Microchip Technology.He noted that most chip suppliers are running lean and have been careful about building inventories.

Microchip Technology, based in Chandler, Ariz., reduced production in the fourth calendar quarter of 2012, but is confident it will be able to ramp up production quickly if necessary. Microchip builds microcontrollers, memory and analog chips.

“In our fabrication facilities we reduced capacity in the December quarter,” said Ganesh Moorthy, chief operating officer for Microchip. “However, we did not shut down the factory or lay off people, but reduced the number of hours at the factories.”

When the recovery “begins to take steam and as our inventory comes down from more historic highs, we will increase hours that production employees are working” to meet rising demand, he said.

He added that Microchip has “invested in inventory that allows us to more quickly respond” to market demand.

“We keep higher inventory levels than other chip companies and we have that inventory in strategic locations,” said Moorthy.

Moorthy added that business should improve once the overall economy bounces back.

“I think there is a good case to be made that there should be recovery in all these economies, but I can't say with certainty,” he said. “But I am cautiously optimistic that 2013 will be a better year.”