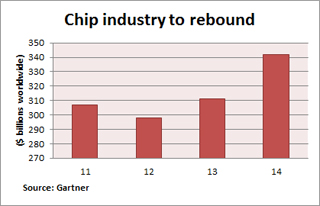 Semiconductor revenue in 2012 will total $298 billion. Earlier Gartner had forecast 0.6 percent growth for the chip industry in 2012, but the debt crisis in Europe, slower emerging market growth, and high semiconductor inventory levels resulted in lower-than-expected revenue, the researcher reported.

"Inventory levels were already high at the start of the second half of 2012, and as PC demand rolled off, supply simply overshot demand,” said Peter Middleton, principal analyst at Gartner.

Weak DRAM prices contributed to declining chip industry revenue in 2012 because of oversupply. The DRAM market will not recover until the second half of 2013 when lower supply growth and increased demand will result in a period of undersupply, according to Gartner.

Memory IC revenue will increase 15.3 percent in 2014 and the overall semiconductor market will increase nearly 10 percent to $342 billion.

The growth in popularity of the iPhone, iPad, and other Apple products will help drive chip demand, especially for NAND flash memory and application-specific integrated circuits (ASICs).

PC production will end 2012 declining 2.5 percent and will remain weak in 2013, according to the researcher. The overall sluggish economy resulted in the computer users delaying PC purchases.

Production of standard mobile phones in 2013 will remain soft because of the weak economy. Demand will be stronger for basic smartphones, according to Gartner.

Another semiconductor revenue driver will be media tablets. Unit production will increase 38.5 percent to 207.1 million in 2013 as demand grows for devices such as the iPad Mini, Amazon Kindle Fire, and Google Nexus 7.