Chip Foundries to Boost Capital Spending by 43 Percent in 2011

A surge in capital spending by semiconductor foundries in 2011 could result in overcapacity in the foundry business by the end of next year, according to researcher IC Insights.

Overcapacity would likely mean that lead-times for some semiconductors could shorten and prices would decline for foundry customers. However, it is not clear if those price declines would be passed on to OEMs and electronics manufacturing services providers.

Capital expenditures (capex) by foundries will grow 43 percent in 2011 to $19.7 billion, the researcher said. In 2010, capex by foundries increased a hefty 146 percent. Such increases in capital spending usually result in overcapacity.

Some industry analysts believe an increase in capital spending among foundry suppliers is necessary because more semiconductor companies are moving to a fab-lite/fabless business model. That means more chip companies will be outsourcing semiconductor production to foundries.

IC Insights said the surge in foundry spending in 2010 was needed because capex by foundries was low in 2008 and 2009. However, foundries may have overcompensated and the large capital spending increases could lead to excess chip production capacity and lower per-wafer revenue for the foundries.

"The vast majority of foundry work is for logic devices," said McLean. "Logic devices would definitely have shorter leadtimes and ultimately lower prices."

McClean said the foundries' revenue per wafer would decline, but the foundries' customers, such as Qualcomm, Broadcom, Altera, Xilinx, wouldn't necessarily pass on the savings to their customers.

"The foundries' customers may just enjoy the better margins and not pass on the savings to the final electronic equipment end-user," said McLean. 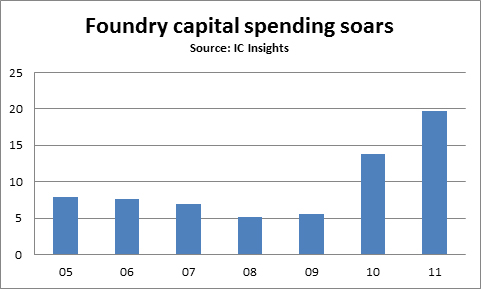