Semiconductor suppliers have been spending less for new chip equipment over the past several months. 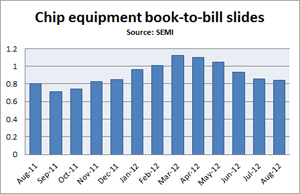 The three-month average of worldwide billings in August 2012 was $1.34 billion, down 7.4 percent from $1.44 billion in July and 8.4 percent less than August 2011 when shipments totaled $1.46 billion, according to the trade association.

“The second half of the year continues to show reduced order and billing levels for the 2012 spending cycle,” said Dan Tracy, senior director of SEMI Industry Research and Statistics. He added that 2012 equipment revenue would likely continue to fall slightly through the year. In total, revenue would be about $40 billion.