The good news for buyers is that semiconductor suppliers will increase spending on chip making equipment in 2013. 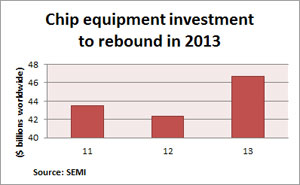 The equipment market grew 9 percent to $43.5 billion in 2011. Despite the forecast decline this year, 2012 will be the fourth highest spending year in history for equipment by chipmakers, SEMI reported.

“Following a multi-year market expansion, sales will again exceed $42 billion — just one billion short of last year’s spending rate as the industry absorbs new capacity," said Denny McGuirk, president and CEO of SEMI. "We expect 2012 to post one of the highest rates of global investment for semiconductor manufacturing equipment.”

About $33 billion will be spent on wafer processing equipment in 2012, a 2.9 percent decline from 2011. Revenue for test equipment will rise 0.2 percent to $3.78 billion, while assembly and packaging equipment spending will total $2.27 billion, up 0.8 percent in 2011, the association forecasted.

While investment by semiconductor companies for chip equipment will decline overall in 2012, chipmakers in Korea and Taiwan will boost spending.

Increases in spending for semiconductor equipment is good news for buyers. Semiconductor manufacturers increase spending either to upgrade equipment and existing fabs, or to equip new fabs and add chip making capacity.