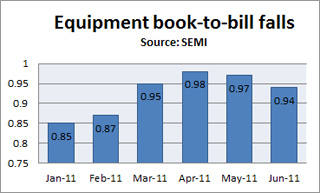 The chip equipment book-to-bill ratio in June was 0.94, down from 0.97 in May and 0.98 in April, according to trade association SEMI. A book-to-bill of 0.94 means that for every $100 of orders that shipped in June, equipment manufacturers received only $94 in new orders.

“Billings are up year-over-year and three-month average billings are relatively consistent,” said Stanley Myers, president and CEO of SEMI. “We will monitor bookings strength for indications of year-end or seasonal softening, but no definitive data trend is apparent yet.”

The SEMI book-to-bill is a ratio of three-month moving averages of worldwide bookings and billings for North American-based semiconductor equipment manufacturers.

SEMI is an industry association for the microelectronic, display, and photovoltaic industries.