Both shipments and new orders for semiconductor declined in September.

New orders for semiconductor equipment declined 15.3 percent in September compared to the month before, as chipmakers scaled back on their equipment capital spending.

The September bookings figure is also 40.4 percent lower than the $1.65 billion in orders manufacturers posted in September 2010. 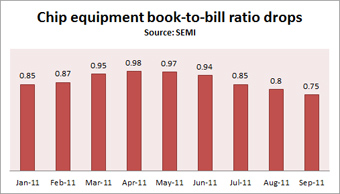 SEMI is the global industry association serving the nano and micro electronic manufacturing supply chains.The three-month average of worldwide billings (order shipments) in September 2011 was $1.31 billion, which was 9.8 percent less than August 2011 when $1.46 billion of equipment shipped, reported SEMI. The billings figure is also 18.4 percent less than September 2010 when manufacturers shipped $1.61 billion of equipment.

“Both billings and booking continue to decline with three-month average bookings almost reaching a value last reported in late 2009,”said Stanley T. Myers, president and CEO of SEMI. Chipmakers are investing in advanced technology, but broader investments and equipment are not being made at the same pace as last year.