The Chinese IC market will ramp up through 2017, growing at a faster pace than the rate of global IC production, according to industry analyst IC Insights.

IC Insights’ latest forecast, revealed in the 2013 edition of “The McClean Report—A Complete Analysis and Forecast of the Integrated Circuit Industry,” indicates a 2012-2017 compound annual growth rate (CAGR) of 13%—five points higher than the 8% CAGR forecast for the total IC market over that period. 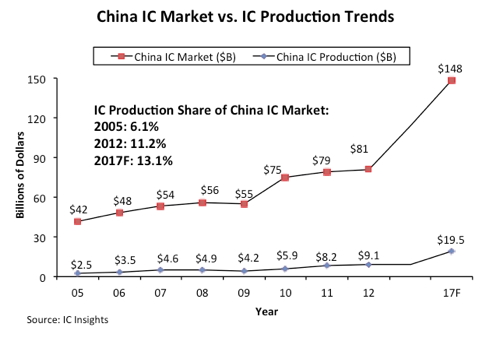 IC production in China represented only about 11% of its $81 billion IC market last year.

IC Insights points to a key distinction between the Chinese IC market and indigenous IC production: China has been the largest consumer of ICs since 2005, but that doesn’t necessarily translate into large increases in Chinese IC production—now or in the future (Fig. 2). IC production in China represented only about 11% of its $81 billion IC market last year. IC Insights forecasts that this share will only increase to about 13%, in 2017. 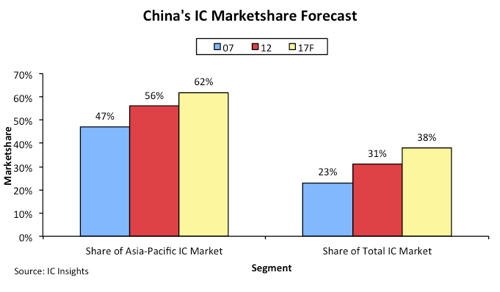 The only foreign IC manufacturers with significant IC production in China last year were SK Hynix, TSMC and Intel, according to the IC Insights report. SK Hynix’s China fab actually had the most capacity of any of its fabs in 2012. Intel ramped-up its 300-mm fab in Dalian, China, which should boost China-based IC production figures over the next few years (capacity of 30,000 wafers per month with a maximum capacity of 52,000 per month).

In January 2012, the South Korean government approved Samsung’s request to construct a 300-mm IC fabrication facility for NAND flash memory (10- to 19-nm feature sizes) in Xian, China. Fab construction began in September 2012, with production set to start in the first half of 2014. Investiture into the fab for the first phase is expected to be $2.3 billion, with a $7 billion budget in total. When Samsung’s fab swings its doors open in 2014, it will be the first IC production fab in the country to incorporate state-of-the-art technology.

The growth of the Chinese IC production base depends more on whether foreign companies continue to locate, or re-locate, IC fabrication facilities in China than on the success of indigenous Chinese IC producers (SMIC, Hua Hong Grace, and others). As a result, forecasts indicate that in 2017 at least 70% of IC production in China will come from foreign companies such as SK Hynix, Intel, TSMC, and Samsung.

For more information, go to www.icinsights.com/services/mcclean-report