Capital Spending by Semiconductor Suppliers to Drop Three Percent in 2012 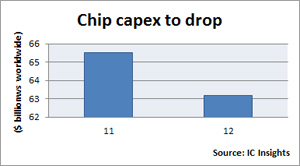 Intel, Samsung, Hynix, TSMC, UMC, and ROHM are expected to spend more 2012 than they did in 2011, IC Insights reported.

Capital spending by Hynix will rise 16 percent to $3.6 billion, and UMC's capital outlays will total $2 billion, a 26 percent increase from the previous year. ROHM’s capital expenditures will increase 78 percent in 2012 to $685 million, according to IC Insights.

Those six major chipmakers are expected to collectively spend about $5.2 billion more in 2012 than in 2011. In contrast, the total of the remaining capital spending outlays by other chipmakers are forecast to decline by about $7.5 billion this year.