Capacitors often show up as an afterthought in many design situations, added to circuits to clean up signals and power sources. In signal acquisition, capacitors play a more central role in filtering out-of-band sources and in sample-and-hold stages for analog/digital converters. In energy-harvesting applications, however, capacitors provide a critical component for accumulating charge from low-energy ambient sources and discharging stored charge quickly and efficiently into a load. In these applications, capacitor characteristics and component selection rise as vital factors in design.

In their traditional roles in circuit design, capacitors are considered as constant capacitance components for filtering, decoupling, and any of the other familiar uses for these devices. For those purposes, differences between the characteristics of an ideal capacitor and those of a real capacitor typically do not greatly impact their ability to fill their role adequately. For energy-harvesting applications, however, the departure from an ideal capacitor significantly impacts the efficiency of the design as a whole.

Among common effects (Figure 1), equivalent-series resistance (ESR) and leakage current dominate an array of non-ideal characteristics that can degrade efficiency. High ESR causes a capacitor to dissipate power, particularly when subject to high AC currents. As such, the use of low-ESR capacitors results in overall higher efficiency in an energy-harvesting subsystem. Leakage current exerts a more profound effect in designs using very-low-energy ambient sources — and rises as a significant limitation in the ability to apply more familiar types of capacitors in energy-harvesting designs.

For any capacitor, the amount of leakage current depends on a variety of factors and changes with time, voltage, and temperature (Figure 2). From the moment it is fully charged, a capacitor exhibits a relatively large current flow initially until it eventually reaches a lower constant value. As a result of the time required to reach this constant level, industry practice typically relies on measurements for leakage current taken after only a few minutes. Because of the difficulties in quantifying non-ideal behavior of a capacitor, some manufacturers will combine leakage current, ESR, and ESL into a single value called the dissipation factor, which is defined as ratio of energy dissipated per cycle to energy stored per cycle — in effect, a measure of the inefficiency of a capacitor. 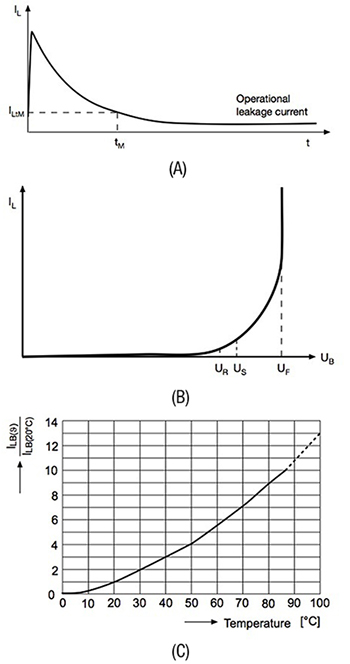 Figure 2: Leakage current in capacitors depends on a variety of factors, including time (A), voltage (B), and temperature (C). (Courtesy of Vishay)

Leakage current also increases with the operating voltage (UB in Figure 2B); rising significantly as applied voltage exceeds the rated voltage (UR in Figure 2B) and passes the surge voltage US and eventually the preforming voltage (UF in Figure 2B) of the capacitor anode. At levels above the surge voltage, physical and chemical reactions can occur in the capacitor. As a result, capacitors are typically not operated at levels above the rated voltage. Finally, leakage current can increase with rising ambient temperature due to the effects of temperature on physical and chemical reactions in capacitors.

Leakage current is characteristic to all capacitor types, but some types have traditionally exhibited greater leakage current than others. For example, electrolytic capacitors remain the workhorse of design but their leakage characteristics have been a concern for use in designs with limited power budgets. Offering high-capacitance values and an ability to handle high voltages and currents, electrolytic capacitors fill a role ranging from use as a basic decoupling or filtering component in traditional design work to use in power conditioning stages in solar inverters.

In the past, electrolytic capacitors exhibited significant leakage current that largely precluded their use in energy harvesting from weak energy sources. Today, however, advances in materials science and manufacturing have enabled manufacturers to deliver tantalum-MnO2 capacitor lines that exhibit significantly lower leakage current. For example, capacitors in the AVX TRJ line or the Kemet T491 line feature leakage current in the low tens of nanoamps. 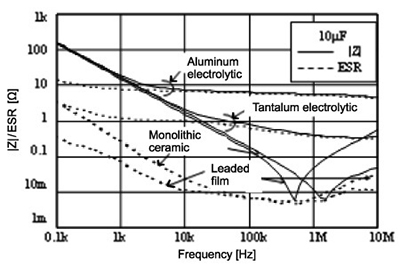 Figure 3: The impedance Z and equivalent series resistance (ESR) of capacitors can vary dramatically across frequency and capacitor type. (Courtesy of Murata)

For many energy-harvesting applications, electric-double-layer capacitors (EDLC), or supercapacitors, have emerged as the preferred solution, providing a combination of high capacitance, efficiency, and small package size that conventional capacitor technologies are rarely able to match. Supercapacitor families such as the Maxwell Technologies K2, United Chemi-Con DLCAP, and NessCap UltraCap offer ESR below 1 mOhm with capacitance values starting at 650 F in 60 mm x 72 mm and larger packages. At the same time, designers looking for a smaller design footprint can find supercapacitors that offer significant capacitance values in very small packages. For example, the Seiko Instruments CPH3225A and Taiyo Yuden PAS series feature 11 mF and 14 mF components in 3.2 mm x 2.5 mm packages.

Although supercapacitors offer superior energy density, their characteristic curves can be much more complex. Supercapacitors combine several capacitors, which can each contribute to a relatively significant total leakage current for a particular device (Figure 4). As a result, designers can find they need to accept a degree of energy loss due to leakage current to gain the exceptionally-high-density energy-storage capacity available with these components.

Figure 4: Supercapacitors are built up from multiple capacitors (A) that each contribute to overall leakage current (B). (Courtesy of Murata)

In summary, unlike conventional applications, designs that harvest energy from low-energy ambient sources require components that themselves consume little power during operation. Although designers might have disqualified electrolytic capacitors in the past because of their relatively-high-leakage current, manufacturers today offer electrolytic capacitors with characteristics well matched to many energy-harvesting applications. While alternate technologies, such as film capacitors and ceramic capacitors offer improved characteristics, compact size and high capacitance, supercapacitors deliver high-energy density at the cost of higher leakage and ESR.