This article features CUI’s AMT303 commutation encoder and notes the evolution of capacitive sensing, how it is deployed, and the advantages to designers.


Synopsis of the article: This article features CUI’s AMT303 commutation encoder and notes the evolution of capacitive sensing, how it is deployed in CUI’s AMT Encoder Series, and the advantages it represents to designers.

Capacitive sensing technology is certainly nothing new to the world of electronics. Its first wide use came in the 1960’s with capacitive touch switches. However, capacitive sensing is new to the field of rotary encoders that measure position, distance, direction, and speed in motor control applications. Once exclusively served by Hall-effect sensors and optical technologies, commutation encoders now benefit from the use of capacitive technology.

The advantages of capacitive sensing include low operating currents in the microamp range, broad programmability, excellent temperature range tolerance, resistance to airborne contaminants, low cost, and extreme durability. However, capacitive sensing can be susceptible to EMI/RFI and water. Both problems are correctable with mechanical supplements such as water seals and EMI/RFI shielding.

My first experience with a capacitive-sensing control device was in 1965. The new bank in town used a marble facade next to its elevators. Embedded in the marble were two concave depressions, one marked ‘Up’, the other ‘Down’. There were no buttons — just the two small depressions in the solid marble. Despite this, the up-arrow lit when my finger touched the ‘Up’ depression. Buried beneath the marble plate was a copper disc that created one plate of a capacitor. My finger became a second plate of the capacitor when placed on the marble that acted as the dielectric.

The plate formed by my finger paralleled the internal Cpad capacitor built onto a printed circuit board, boosting the overall capacitance of the circuit. A sensing circuit detected the capacitance change to trigger the call to the elevator car. Although the detection electronics are more sophisticated today, the sensing circuit remains essentially the same. In addition, matrices now divide the touch surface into individual cells for touch screens on computers and cell phones, making capacitive switches common technology in consumer devices. Another application for capacitive technology is in measurement, with one of the first and most notable commercial examples being a digital caliper. Ingvar Andermo, an electrical engineer at the IM Research Institute in Stockholm, was working on a bill-reading application using capacitive technology. C.E. Johansson approached Andermo about developing a digital caliper using magneto-restrictive technology. Andermo thought that approach was too complicated and decided to use his experience with capacitive sensing. 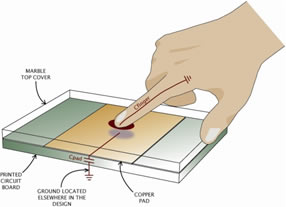 The first Johansson Caliper, or Jocal, debuted at a 1980 exhibition in Chicago. Johansson later licensed the technology to Mitutoyo in Japan which introduced their first digital caliper using this technology some years later. Since then, millions of such calipers have been sold worldwide.

Andermo eventually partnered with CUI to develop the AMT100 series capacitive encoder using the same technology applied to the caliper. Three elements are present: a high-frequency transmitter, a rotor etched with a sinusoidal metal pattern, and a receiver board. The rotor sits between the transmitter and receiver boards. As the rotor turns, its sinusoidal metal pattern modulates the high frequency signal in a predictable fashion. The receiver board reads these modulations and a proprietary ASIC translates them into increments of rotary motion at a 4,096 steps/turn resolution.

The most recent member of CUI’s AMT capacitive encoder family is the AMT303, a quadrature encoder with U/V/W channels that provide commutation signals to brushless dc motors in a 29 × 34 × 11.4-mm package. It operates over an expanded temperature range to 125°C and includes optional complimentary outputs on the A/B position and index channels. The AMT303 is programmable to accommodate 2 through 20-pole brushless dc (BLDC) motor configurations and works with wye and delta connected phases. In addition to the programmable pole count, the AMT303 encoder has several other user-programmable features such as resolution, commutation zero position, and CW or CCW rotation settings. The AMT303 comes with nine interchangeable sleeves to accommodate widely used shaft diameters from 2 to 8 mm.

One very useful programmable feature of the AMT303 is its commutation zero set. Conventional commutation encoders must be mechanically aligned with the motor position. This typically takes place visually using a mechanical mark on the encoder hub or electrically using an oscilloscope. Either method is tedious and time-consuming and adds cost to the assembly process. In contrast, the commutation zero position in the AMT303 is set by simply grounding one pin while the rotor is held in a fixed position by energizing two phases.

The nominal accuracy of the Hall device degrades with a greater number of poles as shown in Table 1. This is critical because accuracy of the commutation timing affects motor efficiency. The AMT303 produces more accurate commutation signals with a maximum error about ±2.2 counts, or 360° × 2.2/4096 = 0.19°. The error is rounded up to 0.2° for the accuracy figures in the table. It should be obvious that Hall devices work best with low pole-count motors typically used in high speed, low torque applications. Regardless of pole count, three Hall devices must be accurately positioned in the motor housing which takes time. High pole-count motors are slow, high torque models and are not good candidates for Hall commutation because they suffer significant energy loss as commutation signal accuracy degrades. 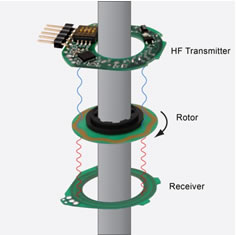 Another method used to commutate current to BLDC motors is with optical encoders. Optical encoders are much more accurate than Hall devices, but also cost more. The commutation signals are generated by a pattern etched on the glass or metal disc inside the encoder and are only applicable to one motor configuration. While aligning the optical disc with the motor rotor, care must be taken to avoid depositing finger oils on the glass which could deflect light and cause subsequent data errors.

In contrast, the AMT303 generates its commutation signals by parsing its 4,096 absolute positions to accommodate 1 to 6 pole pairs, programmable by the user. This offers a broader flexibility in motor choice with a higher switching accuracy not available with optical encoders.

All in all, capacitive technology has come a long way since that local bank elevator 45 years ago. It makes possible a flexible rotary encoder platform that addresses a number of the issues that have plagued the BLDC motor industry for years.