CAN Bus: Taking a Larger Role in EVs and PHEVs

CAN bus technologies already play a key role in coordinating the dozens of intelligent subsystems in today's fossil-fueled cars and trucks.


CAN bus technologies already play a key role in coordinating the dozens of intelligent subsystems in today’s fossil-fueled cars and trucks, but they will be even more critical to the success of tomorrow’s electric vehicles (EVs), plug-in hybrid EVs (PHEVs), and other energy-efficient transportation systems. The functional requirements imposed by the vehicles’ batteries, charging systems, and electric drivetrains raise new challenges for both CAN bus technology (Figure 1) and the designers who use it. This article will examine these challenges as well as a look at the next generation of CAN bus products emerging to meet them. 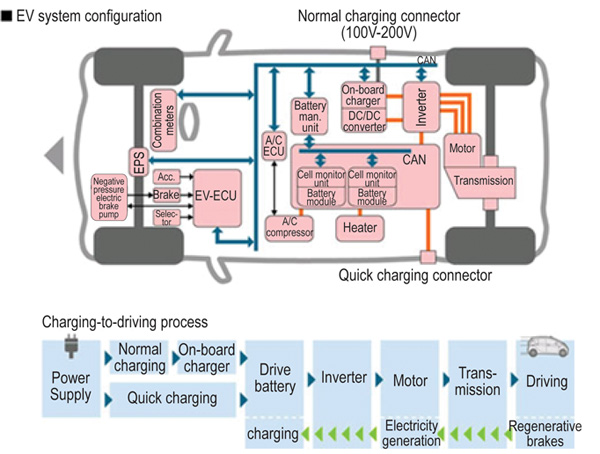 Figure 1: Most hybrid-electric and electric vehicles will rely on the CAN bus to link their batteries, energy management, and electric drivetrain elements into a responsive, integrated system. (Courtesy of Mitsubishi Industries.)

New applications for a mature technology

Introduced by Bosch in the mid-1980s for in-vehicle communications, the Controller Area Network bus (CAN bus) is a standard that allows microcontrollers and other devices to communicate with each other within a vehicle (or other network) without a host processor. Its robust differential signals are carried on small-gauge twisted-pair cabling that is much lighter and less costly than the bulky wiring harnesses it usually replaces. CAN bus’s low cost and high reliability helped make it the de facto control interface for the growing number of digitally-controlled powertrain, body electronics, safety and “infotainment” subsystems in conventional vehicles. Now, it will take on new roles in the battery management systems (BMS), battery charging (regenerative and plug-in modes), motor drive controllers, inverters, and the multiple DC/DC converters used in both EVs and PHEVs.

Some of the most significant new issues facing CAN bus are related to its role as a control interface for high-voltage systems such as the batteries and drivetrain operating at 400 V or more. The remainder of the vehicle’s subsystems operate at much lower voltages (typically 12 V, although some manufacturers are moving to 48 V), so the two power systems must be strictly isolated. In a low-voltage design, the CAN transceiver’s digital interface is connected directly to the MCU and its differential drivers are connected to the CAN Bus, which references its 5-V signal to the chassis ground. In order to ensure the digital interface does not provide any type of galvanic connection to the high voltage system (even its ground), designers must employ some sort of isolation.

Until recently, high-voltage isolation has been implemented by adding an external optoisolator or other discrete component to standard CAN bus transceivers. Automotive-grade optoisolators such as Avago’s ACPL-M71T (1-Mbit/s bus speeds) and ACPL-M72T (500-kbit/s bus speeds) are designed to attach directly to CAN transceivers like Infineon’s TLE7650G with a minimum of additional discrete components (Figure 2). 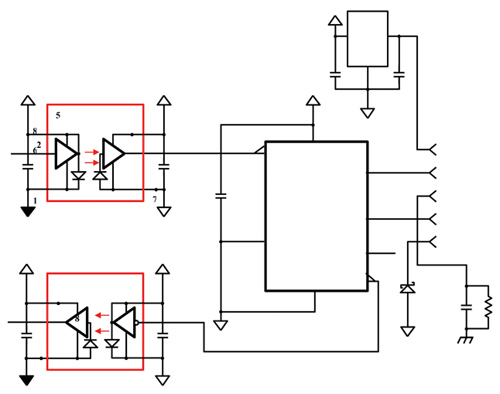 Figure 2: Most of today’s CAN transceivers employ discrete optocouplers or other external devices to provide isolation between high-voltage subsystems and the rest of the vehicle’s electrical system. (Courtesy of Avago Technologies.)

For applications where component count is an issue, Texas Instruments’ ISO1050 (ISO1050 eval module) offers a single-package transceiver/isolator solution with integrated capacitive isolation. Rated for voltages of up to 4 kV, these general-purpose devices are suitable for CAN networks as well as providing drive signals for IGBT devices, DC/DC converters, and offline chargers. The device can be used as a regular CAN transceiver but its high-voltage isolation capability makes it well suited for battery management systems, motor drive, and charging subsystems.

Much like laptop computers, electric vehicles must conserve their battery power wherever possible by turning off system elements whenever they are not needed. In classical CAN system, all the electronic control units (ECUs) that connect a subsystem to the network are active whenever the vehicle is active. Although the new standards governing automotive CAN bus applications will allow CAN nodes to sleep and wake at will are still being finalized, the industry has already embraced limited forms of so-called partial networking techniques, such as GMLAN (General Motor’s special implementation of CAN ), which can turn off ECUs and their associated system elements when not needed. However, the current protocols have no provision for reawakening an individual sleeping ECU without a general wake-up call to bring any inactive nodes back on line.

Devices like TI’s SN65HVDA1040A CAN transceiver offer a standby mode and are enabled to allow for wake up requests via the bus. If a high logic level is applied to the STB pin of the device, it enters a low-power bus-monitor standby mode. While the SN65HVD1040 is in the low-power bus-monitor standby mode, a dominant bit greater than 5 µs on the bus is passed by the bus-monitor circuit to the receiver output. The local protocol controller may then reactivate the device when it needs to transmit to the bus.

A new specification currently in development will support selective, automatic wake-up of ECUs. The ISO 11898-6 specification adds a “wake-up frame” to the CAN bus protocol which contains both an alert flag and an address that can enable individual logical groups of ECUs to awaken – even if they are on different branches of the CAN bus. The ISO 11898-6 specification is expected to be ratified by the end of 2012 and at least one (German) automaker intends to incorporate it in its vehicles by 2014, with a second one (also German) tentatively committed to follow soon after. Infineon has already announced it will release an integrated System Basis Chip, which supports the ISO 11898-6 spec, in late 2012 (see the next section for details). Freescale is also actively developing ISO 11898-6 compliant products, and it’s very likely that Texas Instruments and other manufacturers are as well.

Partial networking is expected initially to save energy in automotive subsystems such as parking assistance controls (only needed while parking), interior systems such as seat and mirror adjustment, which are used infrequently, and other automotive elements that are not needed while the vehicle is cruising along. It will also be used to selectively enable the vehicle’s entertainment and information systems when parked without “waking” the rest of the vehicle. An average ECU consumes around 200 mA (around 2.4 W) so partial networking is expected to save only 50 to 100 W in initial EV/PHEV designs, but even this small gain can extend a vehicle’s range and the savings are expected to grow as the next generation of vehicles takes better advantage of this feature.

As CAN bus’s role in vehicles expands, so does the level of integration in the devices that support it. The Freescale MC33904 System Basis Chip (Figure 3) combines power management and CAN functionality, allowing it to be used to power MCUs or other devices that must be placed into a low-power standby mode. This capability is essential for “functional safety” applications where MCUs will be used in battery systems or other critical applications that comply with the ISO 26262 specification which defines functional safety levels of an application. The MCC3904 is designed to work with “Safe Assure” MCUs such as the MPC5643L, designed for applications requiring high functional safety. In this role, it serves as an advanced power management unit for the MCU and additional integrated circuits such as sensors and CAN transceivers. The processor can also put itself to sleep and rely on the System Basis Chip (whose transceiver remains active) to wake it up when an appropriate event occurs. 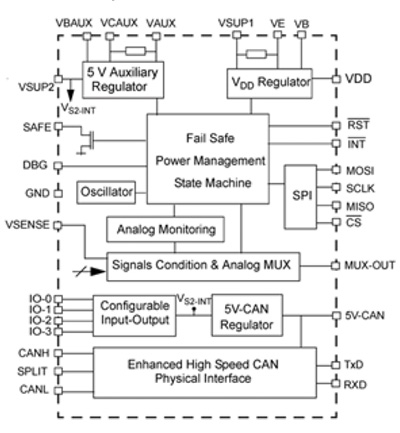 Infineon is also producing more highly-integrated CAN bus products, including the TLE9267QX, which will be shipping in late 2012. It is the first member of a new System Basis Chip family that supports the full ISO 11898-6 standard for partial network operation. Optimized primarily for in-door applications (window, mirror, door switches, indicator lights), the device integrates a CAN transceiver, a protocol handler with a lookup table for addressing and wake-up functions (normally handled by ECU’s MCU), an on-chip regulator, SPI bus, and a set of application-specific interfaces. Infineon will also introduce a basic CAN transceiver with wake-up functionality for general-purpose applications sometime in the near future.