Most new ultrabook computers will use cache SSD drives rather than hybrid hard-disk drives. 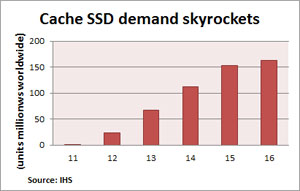 Cache SSD shipments will increase to 67.7 million units in 2013 and continue to rise through 2016 when 163 million units will ship, IHS reported.

The growth in demand for cache SSDs will dwarf hybrid drives because cache SSDs have several advantages. Hybrid drives consist of a hard-disk drive and an integrated flash player in a self-contained form factor. Hybrids are being considered an option for super-thin ultrabooks, according to IHS.

Cache SSDs are used as a discrete separate memory component alongside a hard-disk drive, not together in one housing unit.

Ryan Chien, an analyst for memory and storage at IHS, noted that a combined physical hard-disk drive with a smaller cache component results in faster responsiveness and larger capacities while keeping costs down. He added that discrete cache SSDs and hard-disk drives are much more scalable and efficient for mainstream storage. Few changes are needed for cache SSDs or thin HDDs to keep PC makers' manufacturing processes cost effective.